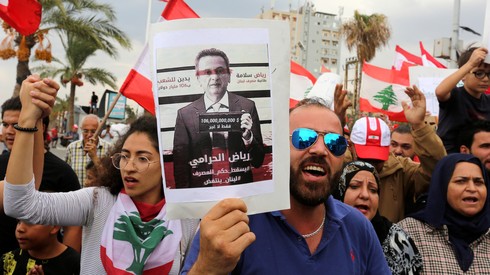 A leaked copy of Aoun’s order says Salameh should be barred from traveling through land, sea and air ports of entry due to “judicial requirements in light of the important clues and evidence in the preliminary investigation file, especially the lawsuit filed by the lawyers of the legal department of the People Want the Reform of the Regime group.”

Salameh, one of the world’s longest-serving central bank governors, is also facing judicial investigations in France, Switzerland and other European countries on suspicion of money laundering and illicit enrichment, among other allegations.

Salameh has recently dismissed the cases against him as unfounded and lacking any evidence, claiming they were opened based on complaints filed by Lebanese citizens “for reasons that could be political… or tied to certain interests.”

He said that a top-tier financial audit firm had scrutinized his accounts at his request and presented him with a report that he then submitted to officials and judges.

“I am ready to cooperate with all investigations,” he said, claiming they were based on “fabricated evidence” that made it seem as though he “took all of Lebanon’s money and pocketed it.”

Salameh, 72, was once highly regarded but has faced increasing scrutiny after the country’s economic collapse that began in late 2019.

Salameh’s wealth is reportedly under investigation in France, Luxembourg, Germany, Liechtenstein and Switzerland. Lebanon’s public prosecutor launched a probe after Switzerland sent a request for judicial co-operation to the Justice Ministry in November last year.

Swiss investigators suspect Mr Salameh of having embezzled $330 million from the central bank between 2002 and 2015 under the guise of payment to Forry Associates Ltd, a company registered in theBritish Virgin Islands and managed by his brother, Raja Salameh. Forry allegedly acted as a broker in the bank’s sale of treasury bills and the money was transferred to Switzerland.

UN Secretary General Antonio Guterres said in videotaped comments made during a closed-door meeting on his visit to Beirut last week that Lebanon’s financial collapse was caused by “something similar to a Ponzi scheme”,

Lebanon is in the third year of an economic meltdown that began in 2019 when the financial system collapsed under the weight of huge state debt — the result of decades of corruption and mismanagement — and the unsustainable way it was financed.

Critics of the Lebanese authorities have compared the financial system to a Ponzi scheme, depending on fresh borrowing to pay back existing debt. The central bank has denied this.

“As far as I understand, what has happened in Lebanon is that Lebanon was using something similar to a Ponzi scheme … which means that together with of course corruption and other, probably, forms of stealing, the financial system has collapsed,” Mr Guterres said in the video, which was circulated widely on social media.

The crash has caused the Lebanese pound to lose more than 96 per cent of its value and people have been frozen out of their deposits in the paralysed banking system.