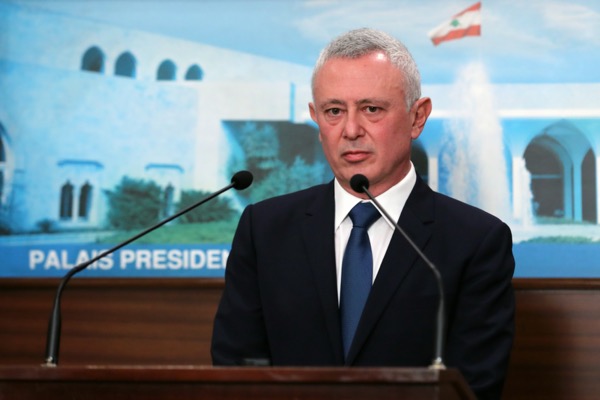 “We will be present whenever called by President Aoun and we have no personal problem with him. We agree on the strategic issues and we’re advocates of dialogue, but it should be between two camps and not within the same camp. That’s why we wished them success and said that we won’t take part in dialogue,” Franjieh announced after meeting Aoun in Baabda.

“We do not support a dialogue that will be for photo op and we will not attend dialogue to be in the photos,” he said, while noting that Marada would support any resolutions taken in such a conference.

Responding to questions by reporters, the Marada chief said: “Hezbollah only seeks good ties between us and the Free Patriotic Movement, but you have to see if (FPM chief Gebran) Bassil would accept to ally with corrupts, because he considers us so.”

“Had I come to the palace to pave my way for the presidency, I would have appeased President Aoun and would have acted in another way,” Franjieh added, in reference to the rumors that Hezbollah is seriously considering him as a candidate to replace Aoun after his term expires in October

According to media reports Progressive Socialist Party leader Walid Jumblat also would not attend . He had announced two days ago that “seeking the revival of Cabinet sessions remains the most important thing, before doing any other act.”

Al-Mustaqbal Movement leader ex-PM Saad Hariri and the Lebanese Forces have already confirmed their boycott of the proposed dialogue.

The newly-formed Cabinet of PM Mikati has not convened since October 14 due to a dispute over the port blast investigator Judge Tarek Bitar . Hezbollah and the Amal Movement are demanding that the government take action to fire him over alleged bias.

Both Aoun and Mikati, have stressed that they reject “political interference” in judicial affairs.

Raad confirms Hezbollah will always be the master of this country

Meanwhile the Lebanese currency collapsed again today as the financial crisis continues . The pound ( The Lebanese Lira) LL , which is officially pegged at the rate of about 1500 LL to the US dollar, hit today the rate of 33,600 LL to the dollar , a new black market record low . One analyst told Ya Libnan ,” this is the price we are paying for getting Aoun to Baabda “, a possible reference to Aoun’s agreement of Feb 2006 with Hezbollah which is blamed for the collapse of Lebanon and its economy