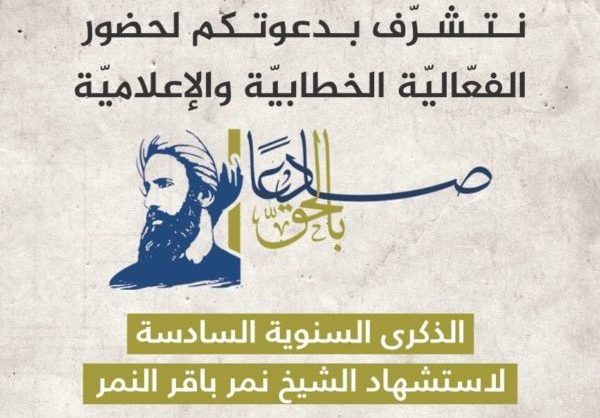 Members of Hezbollah will on Wednesday mark six years since the execution of Shiite cleric Sheikh Al-Nimr, according to reports, amid heightened tensions between Saudi Arabia and Lebanon.

The Hezbollah event – dubbed “the Opposition Meeting in the Arabian Peninsula” – will be held in the Mujtaba area of Beirut’s southern suburbs.

It appears to be in response to the launch of the so-called “National Council to Confront the Iranian Occupation”, which was recently formed by around 200 signatories with its head office led by former Lebanese MP and minister Ahmed Fatfat, according to Al-Modon.

He was executed due to his support of the mass anti-government protests that took place in the Eastern province of Qatif, where a Shia majority have long complained of marginalisation.

Wednesday’s event will take place amid tensions between Saudi Arabia and Lebanon, where the Hezbollah leader Hassan Nasrallah accused the Gulf country of “terrorism” and “spreading ISIS ideology” in a recent speech.

Lebanon and Saudi Arabia have been experiencing a series of diplomatic rifts since late October 2021.

The Saudi government withdrew its ambassador to Lebanon following remarks by Lebanon’s then Minister of Information, George Kordahi, who criticised the Gulf country’s involvement in the Yemeni civil war.

The Gulf has concerns over growing dominance in Lebanese politics by the Shia paramilitary movement Hezbollah, which the GCC classifies as a terrorist organisation.

During an interview with Al Hadath TV he confirmed that, “Lebanese laws prevent disturbing relations with friendly countries.”

He added , “We will issue the necessary instructions to everyone who will attend the symposium marking the execution of Sheikh Nimr al-Nimr who was executed over “terrorism charges “

He added, “Those who meet tomorrow will be instructed not to harm Saudi Arabia.”

He added , attacking Arab and Gulf countries is not in the government’s program .”