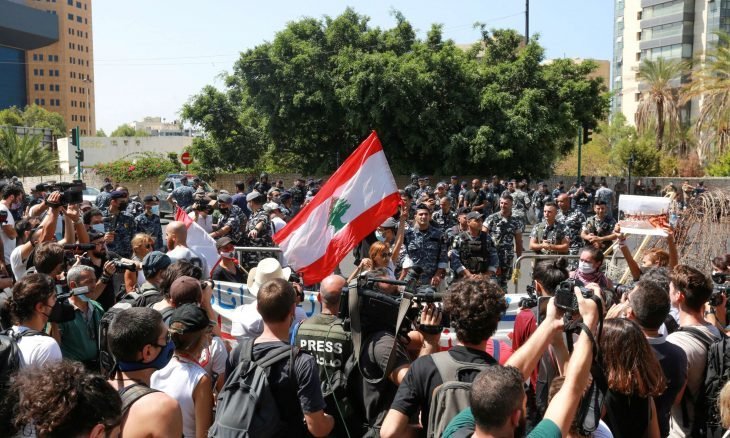 A number of Lebanese people cut off roads this Monday evening , in the regions of Mount Lebanon, in the north and south, in protest against the deteriorating living conditions and the plummeting of the Lebanese currency against the US dollar. The protesters chanted slogans demanding the departure of the ruling authority
Share:

Lebanon’s currency has lost more than 15% of its value since the start of the year, piling further pressure on the population more than two years into a crisis that has plunged many into poverty and fuelled demonstrations.

Protesters took to the streets in several areas of the country on Monday night, burning tires and voicing anger at the dire economic situation amid political deadlock. Cars queued at fuel stations to fill up before another expected rise in prices.

“You would like to believe that you can be hopeful, but there is no hope,” said Abdel-Rahman Shaar, who runs a computer shop in central Beirut. “People are dying of hunger … , the state is in a coma and the dollar (exchange rate) is crashing.”

Public frustration has been fuelled by political sclerosis among Lebanon’s sectarian leaders.

A new cabinet, appointed in September as a step towards reviving talks with the International Monetary Fund, has not met for nearly three months amid a dispute over the conduct of an investigation into the devastating 2020 Beirut port explosion.

President Michel Aoun held a series of meetings on Monday and Tuesday to win support for a national dialogue conference to discuss the economic crisis among other issues, but he has so far only secured backing from his close allies.

“At the best of times, the call for dialogue is normal and necessary. At a time of hardship, pressure and bickering, it is more than necessary not to stop dialogue,” Mohamed Raad, a lawmaker from Hezbollah, a powerful Shi’ite Muslim group that has an alliance with Aoun’s Christian party, said after meeting the president.

Others, including rivals from Aoun’s Christian community, have rejected the proposal. Some have said talks must wait until a parliamentary election in May, while others have said the cabinet needs to meet first.

Aoun’s six-year term as president, a post reserved for a Christian under Lebanon’s sectarian system, ends later this year adding further uncertainty to the political outlook.