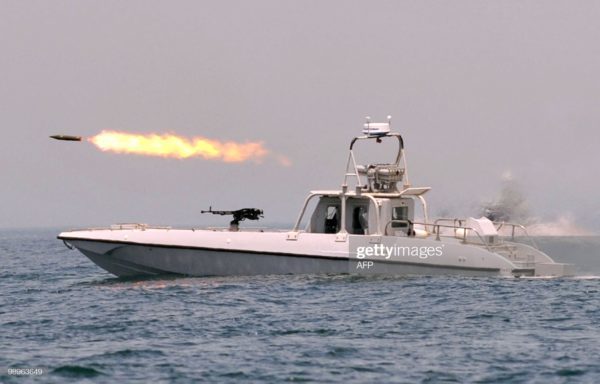 In this file photo obtained from Iran’s ISNA news agency, a katyusha rocket is fired from a speed boat during a military drill near the port of Jask in the Sea of Oman on May 10, 2010. Thousands of weapons bound for Yemen’s Houthis seized by the US military in the Arabian Sea originated from this port . AFP PHOTO/ISNA/RUHOLLAH VAHDATI (Photo credit should read RUHOLLAH VAHDATI/AFP via Getty Images)
Share:

Thousands of weapons bound for Yemen’s Houthis seized by the US military in the Arabian Sea originated from a single port in Iran, the Wall Street Journal reported, citing a confidential United Nations report. The discovery  of the arms manufactured in Russia, China and Iran and seized by the US Navy over the last few months included rocket launchers, machine guns and sniper rifles. The weapons were shipped from the southeastern Iranian port of Jask, located on the Sea of Oman, on what the US considers a regular transit route from Iran to the Houthis, according to the UN report, citing data from the ships transporting them and interviews with the crew.

The UN imposed an arms embargo on the Houthis in 2015, a year after the start of the civil war in Yemen.

Iran has denied to the United Nations that it is smuggling weapons to the Houthis, and the Houthis have denied receiving arms from Iran. The report notes that the mix of weapons indicates that this is a regular supply pattern

Yemen has been embroiled in war since 2014, setting up Iran -backed Houthi rebels against a world-renowned government and a Saudi-led military force.

Citing a confidential report by the UN Security Council of Experts in Yemen, the Wall Street Journal on Saturday  reported that boats and railways were used to smuggle weapons made from Russia, China and Iran to Yemen.

The arms included rocket launchers, machine guns and sniper rifles, which had been seized by US troops in recent months.