Jumblatt blames Hezbollah and its allies for Lebanon crisis 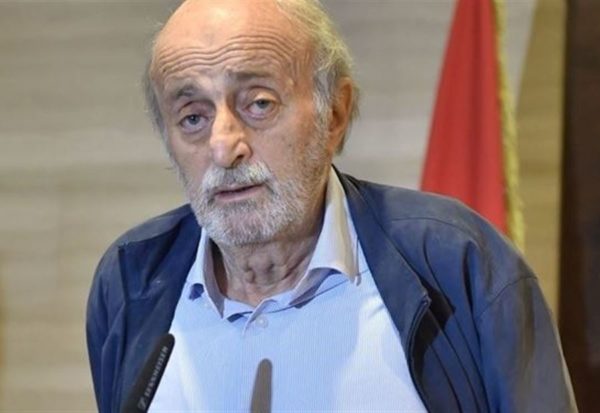 The head of the Progressive Socialist Party in Lebanon, Walid Jumblatt, confirmed that “the one party responsible for the successive crises that Lebanon is going through is “Hezbollah”, noting that “the party, its cliets and its allies inside have taken Lebanon to a different position, which contradicts the essence of its existence and its original concept, as Beirut has become In a side that is completely opposite to Arabism , as evidenced by the recent crisis with the Kingdom and the Gulf states, in the light of which logical decisions were taken.

Jumblatt told the Saudi newspaper, Al-Bilad: “The decisions taken by the Kingdom and the Arab Gulf states are a rightful reaction after the practices of Hezbollah and its clients by dragging Lebanon into a non-Arab axis, because Beirut is led by politicians loyal to foreign countries.”

Jumblatt fears, according to him, “the country’s slipping into the unknown and the fear that Lebanon will go towards further economic, political, social and living deterioration,” pointing to the need to start urgent reform according to the program and agenda set and supervised by international institutions, foremost of which is the International Monetary Fund, as well as The first step is for the government to meet.

With regard to the ability of the current government to take decisions that save Lebanon , Jumblatt answered “yes,” noting that its ability is contingent on meeting first in order to put in place the program, which is already present and includes reform in the electricity sector, banks and price unification and financial losses. There are three figures for the deficit that must be unified, and we also have the issue of the ration card, which is one of the important items, and certainly it can, but there are those who prevent and obstruct .”

He added, “In order for the government to meet, the forces that prevent its meeting must stop .”

He continued, “At least, defensive strategic steps must be taken, leading to the state being solely responsible for the two sovereign decisions (war and peace ).”

On the government’s ability to fulfill its obligations in terms of implementing international resolutions and achieving the required reforms, Jumblatt said: “The government has not been able to implement so far. I advised the authorities in Lebanon to try and benefit from the positive impact of the recent French visit to the Saudi Kingdom and seize the positive nature the Saudi summit and the joint statement on Lebanon.

He also praised Crown Prince Mohammed bin Salman for the positive phone call with PM Najib Mikati, urging Mikati to make the most of it, stressing the need to translate this matter in Lebanon into a fruitful practical reality.”

Regarding the upcoming parliamentary elections, Jumblatt pointed out that “the Free Patriotic Movement, led by MP Gebran Bassil, submitted an appeal to the current electoral law with the aim of controlling Lebanon and the elections. The Free Patriotic Party is b trying to prevent the Lebanese expatriates from voting to all members in Lebanon, and wants to limit their voting to six members only , given that he has lost much of his popularity. He described Bassil ‘s efforts as “unconstitutional innovation” and a great danger to the elections.

Jumblatt pointed out that “the real danger in Lebanon is the deteriorating economic conditions.”

He added, “What will Lebanon be like? A pluralistic and diverse Arab Lebanon, and what will the universities and the press be like if everyone emigrated and went?” Hezbollah, in one way or another, is firmly responsible for what is happening. Unfortunately, it seems that a diverse and multi-Arab Lebanon does not sit their plans. They want a different Lebanon.

He concluded, “The only route to stability is the Taif accord . Does Hezbollah want to stabilize it, or does it want something else? This question is directed only to them.”

Translated from an Arabic language article by Lebanon Debate