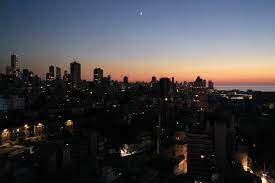 Much of Lebanon is without power following outages in the country’s core power plants.
Share:

Much of Lebanon is without power following outages in the country’s core power plants.

The Zahrani plant lost power on Saturday and the Deir Ammar plant shut down the day before, Reuters reports. Both outages are linked to the ongoing scarcity of fuel in the country. The two plants, among Lebanon’s largest, are responsible for supplying 40% of the country’s power, according to the BBC.

The nation’s power grid is not expected to work again until “next Monday, or for several days,” a government official told Reuters.

Protests erupted after the outages, with angry residents converging at the regional office of state-owned power company Electricite du Liban (EDL) in Halba, Al Jazeerareports. And in Tripoli, the current situation has exacerbated water shortages in the area, leading to backlash from the public and forced road blockages, according to their report.

Prior to the outages, citizens had for months only been given a few hours of electricity per day, according to a Washington Post report. That left many to rely on private generators, a costly and, for some, inaccessible option. Among those affected are those most vulnerable. A Lebanese hospital warned last month that if fuel shortages didn’t improve, they’d be forced to shut down, the Associated Press reported last month.

The Lebanese Armed Forces is expected to give 6,000 kiloliters of gas oil to split between both plants, which will supply power to the country for three days, Reuters reports, citing National News Agency. EDL is also expecting to receive fuel from Iraq later this month, according to Al Jazeera.

This weekend’s outages comes amid ongoing economic and political turmoil in the country. With the national currency having fallen swiftly and with many citizens struggling to survive, the World Bank has said that Lebanon is experiencing one of the worst economic crises to occur anywhere in the world since the 1800s.