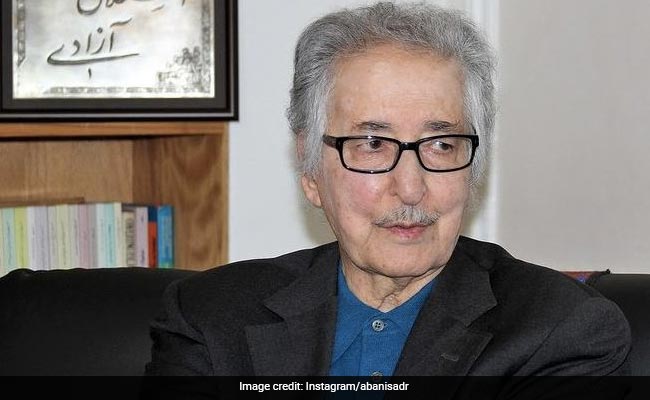 “After a long illness, Abolhassan Banisadr died on Saturday at the (Pitie-)Salpetriere hospital” in southeast Paris, IRNA reported, citing a source close to the former president.

Banisadr was elected president in January 1980 hot on the heels of the previous year’s Islamic revolution.

But he was dismissed by the Iranian parliament in 1981 after he opposed late supreme leader Ayatollah Ruhollah Khomeini. Since then, he had been living in exile in France.

Born on March 22, 1933 in a village near Hamadan in western Iran, Banisadr was a supporter of liberal Islam.

A practising Muslim, he was an activist from the age of 17 in the ranks of the National Front of Iran, the movement of nationalist leader Mohammad Mossadegh.

After studying theology, economics and sociology, Banisadr became a leading opponent of the Shah’s regime.

Wanted by the police, he was forced to leave Iran in 1963 and settled in Paris. In 1970, he advocated the union of the Iranian opposition around Khomeini, who was exiled in Iraq.

In October 1978, Khomeini went to France, and Banisadr became one of his close friends and advisers.

On February 1, 1979, Banisadr was on the plane that brought Khomeini back to Iran.

He served as Iran’s minister of economics and foreign affairs.

The man at times referred to as “Khomeini’s spiritual son” was elected president of the Islamic Republic of Iran on January 26, 1980.

From the start of his mandate, Banisadr faced immense difficulties: the US hostage affair, the Iran-Iraq war, an economic crisis and, above all, the opposition of fundamentalist clerics.

As Iran’s armed forces commander from February 1980 to June 1981, he reorganised the country’s military and spent much of his time on the front lines of the war with Iraq.

But the proponent of an “Islamic third way” that respected democratic rule, he faced intense pressure from hardliners.

After over a year of disputes with some senior members of the Shiite clergy, the democratisation process came to a halt.

On June 21, 1981, Banisadr was dismissed by parliament for “political incompetence” with Khomeini’s approval.

Banisadr then left Iran on July 29, 1981 hidden on board a military aircraft hijacked by one of his supporters. As soon as he arrived in France, he requested and obtained political asylum.

In August 1981, he founded the National Council of Resistance of Iran (NCRI) with another exiled leader, Massoud Rajavi, leader of the People’s Mujahedin, who had escaped on the hijacked plane, but he left the organisation less than three years later.

He had been living in Versailles since May 1984.