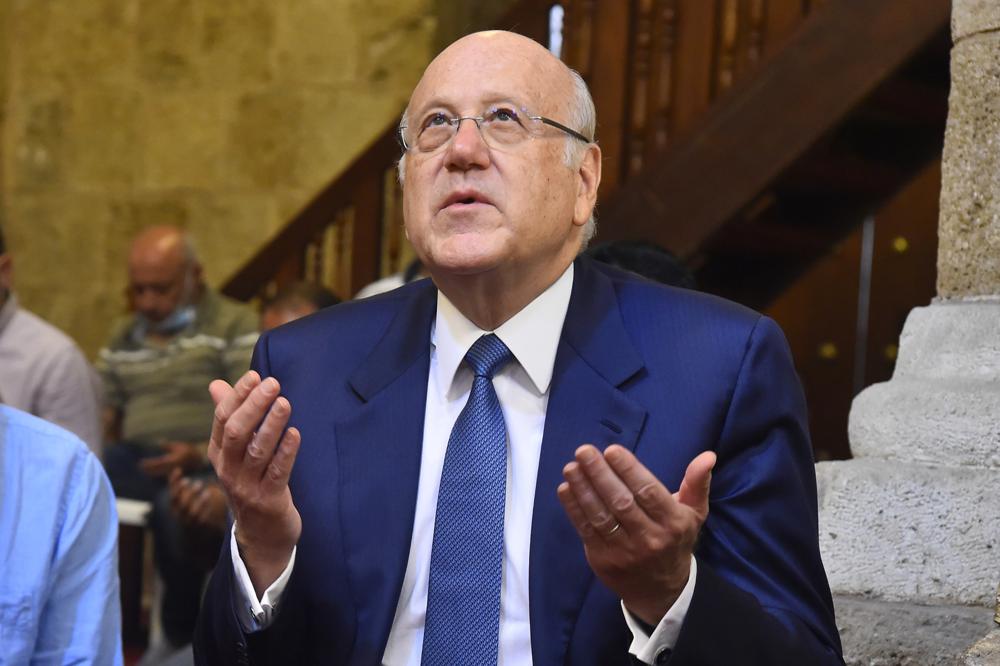 BEIRUT (AP) — Lebanon’s new prime minister pledged Friday to gain control of one of the world’s worst economic meltdowns, saying lifting subsidies was a critical priority for the small country’s government formed after a year of political stalemate.

It is a momentous task facing the 24-minister Cabinet, which includes fresh faces who are prominent experts in their fields, but which still reflects Lebanon’s fractious politics.

The country’s economic crisis, unfolding since 2019, has been described as one of the worst in the world in the last 150 years. It impoverished more than half of the population within months and left the national currency in a freefall, driving inflation and unemployment to unprecedented levels.

The new government is expected to undertake critically needed reforms, as well as manage public anger and tensions resulting from the lifting of fuel subsidies by the end of the month. Lebanon’s foreign reserves have been running dangerously low, and the central bank in the import-dependent country said it is no longer able to support its $6 billion subsidy program.

The government is also expected to oversee a financial audit of the Central Bank and resume negotiations with the International Monetary Fund for a rescue package.

Few believe that can be done with a government that leaves power in the hands of the same political parties that the public blames for corruption and mismanagement of the country’s resources.

“The biggest winners are the political parties, collectively,” said Maha Yahya, director of Beirut-based Carnegie Middle East Center. “What is very clear is that it is the epitome of business as usual. Everybody in that Cabinet was named by the political leadership. Some are more competent than others. But the political decision-making is elsewhere.”

After more than a year of bickering among political rivals over the shape of a government, a sudden breakthrough was reported early Friday and the new line-up was announced at the presidential palace.

Experts and politicians say a final nudge to Lebanon’s rival parties to compromise may have come from the country’s equally divided international supporters – the United States, France and Iran – after Lebanon’s economic unraveling reached a critical point that risked a social explosion. Crippling shortages in fuel and medicine threatened to shut down hospitals, bakeries and the country’s internet and caused friction, sometimes violence, in long queues to fill up vehicles.

Mikati, one of Lebanon’s richest businessmen who is returning to the post of prime minister for the third time, sent a message to the tired and exhausted public saying he hears their pain.

Holding back tears, Mikati said he recognized the pain of Lebanese mothers who cannot feed their children or find aspirin to ease their ailments, as well as to students whose parents can no longer afford to send them to school.

“We hope to reach what people want and to at least stop the collapse that is happening,” he told reporters at the presidential palace.

The agreement breaks a 13-month deadlock, one of Lebanon’s longest periods without a fully functioning government at a time when the country was sliding deeper into financial chaos and poverty.

Lebanon’s government resigned after the catastrophic Aug. 4, 2020 explosion at Beirut port, that left more than 200 people killed and the city maimed. The economic meltdown was made worse by the deadlock among rival political groups.

Mikati became a favorite for the post earlier this year after he was endorsed by most of Lebanon’s political parties, including the powerful Iran-backed militant Hezbollah group and the other major Shiite party, Amal, led by Parliament Speaker Nabih Berri. He took over from former Prime Minister Saad Hariri, who abandoned efforts to form a government after eight months after failing to agree with President Michel Aoun on the Cabinet’s makeup.

The power struggle in Lebanon’s sectarian-based system revolved around which group has a blocking vote over policies at a time of much-needed reforms. But it also reflected the growing power of Hezbollah and its allies at the expense of once powerful western-backed Sunni and Christian parties.

U.S senators visited Lebanon earlier this month while a senior State department official spoke to the Lebanese president and Mikati, urging the formation of a government. Separately, French President Emmanuelle Macron called the newly elected Iranian President Ebrahim Raisi, who said he supported the formation of a “strong government in Lebanon.”

“The American message was really pushing forward for the government to be formed,” said Alain Aoun, a lawmaker representing the largest Christian block close to the Lebanese president, while the same message came from Iran’s president in a phone call Macron.

Both were messages that recognized the reality on the ground in Lebanon and signaled that support would be forthcoming once a government is formed to stem the rapid collapse, said Salem Zahran, a political analyst.

“This is the best that could happen to Hezbollah,” Zahran said. The group has allies in both the Public Works and Utility ministry— which oversees the airport and port— and the Culture ministry.

Many members of the new Cabinet are experts in their fields. Firas Abiad, director general of the Rafik Hariri University Hospital who has won praise for his transparency in handling the pandemic, was named health minister. A top Central Bank official, Youssef Khalil, was appointed as finance minister, and Bassam Mawlawi, a judge, is the new interior minister.

Yahya, the analyst, said Mikati has an uphill battle with a government that has no common purpose.

“This government is like a shot of morphine. Definitely some money will come in… but this is all short term. The country is still not on any sustainable path to recovery.“

The public was mostly skeptical, although somewhat relieved.

Ali Sharafeddine who owns a company that sells power generators said the new government is no different from previous ones, formed by the same political groups that have ruined Lebanon.

“They’re just fooling us,” said the 51-year-old Sharafeddine.’t have a complete picture, obviously, of where every article of defense materials has gone, but certainly a fair amount of it has fallen into the hands of the Taliban,” the White House national security adviser, Jake Sullivan, said in a recent briefing. “And obviously, we don’t have a sense that they are going to readily hand it over to us at the airport.”

On Aug. 18, a group of Republican senators demanded a “full accounting” of all the U.S. military equipment left in Afghanistan.

In a letter to Secretary of Defense Lloyd Austin, the lawmakers requested information on “what military equipment has been seized by the Taliban, an assessment of how long it will take the Taliban to use each of the captured equipment,” and whether the Biden administration was making any efforts “to recapture or destroy equipment that remains in Afghanistan and is at risk of being used by terrorist entities.”

According to Sullivan, the Black Hawk helicopters that were distributed as recently as July, during the U.S. draw-down, were intended for Afghan forces and came at the specific request of Afghan President Ashraf Ghani, who then fled the country as the Taliban began to move into the capital of Kabul.

“Those Black Hawks were not given to the Taliban. They were given to the Afghan National Security Forces to be able to defend themselves at the specific request of President Ghani, who came to the Oval Office and asked for additional air capability, among other things,” Sullivan said. “So the president had a choice. He could not give it to them with the risk that it would fall into the Taliban’s hands eventually, or he could give it to them with the hope that they could deploy it in service of defending their country.”

Sullivan continued: “Both of those options had risks. He had to choose. And he made a choice.”