Who is who in Lebanon new government 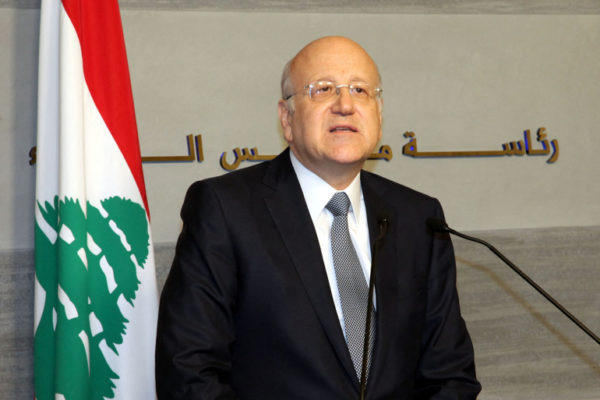 Prime Minister designate Najib Mikati formed a government of 24 ministers on Friday, 13 months after his predecessor Hassan Diab resigned in the wake of a deadly blast at Beirut port.

The past year has been marred by political wrangling between Lebanon’s sectarian political parties, which have been widely accused of prioritising their interests over the population’s.

The country’s worst-ever economic crisis, which came to a head in late 2019, stems from decades of corruption in the state and unsustainable financing. The local currency has lost more than 90 per cent of its value and the UN believes about 80 per cent of the population lives in poverty.

The cabinet includes 12 Christians and 12 Muslims in line with Lebanon’s sectarian politics. The Prime Minister is always Sunni Muslim, the President Christian Maronite, and the Parliament Speaker Shiite Muslim. There is only one woman among the ministers.

Head of his own political party, the Azm movement

He was picked on July 26 to form a Cabinet after veteran politician Saad Hariri stepped down on July 16, months after diplomat Mustapha Adib also failed to form a government on September 26.

Mr Mikati has previously said he would seek to restart negotiations with the IMF once his government was formed. In his speech on Friday, he vowed to hold next year’s elections on time and promised a “governmental plan to rescue the country”.

Mr Al Shami was Middle East technical assistance regional office director at the IMF from 2008 to 2013 and worked at the IMF for around two decades, an IMF spokesperson told The National.

A former World Bank economist with a doctorate in economics from Vanderbilt University in Nashville, Tennessee, Mr Bou Habib served as Lebanon’s ambassador to Washington between 1983 and 1990 – when President Ronald Reagan elected to withdraw US Marines from the country – Lebanon’s state-run National News Agency said.

Mr Bou Habib returned to the World Bank in 1992 as an adviser to the head of the MENA regional communications department.

Mr Bou Habib founded the Issam Fares Institute in 2007, a Beirut based think tank. He also headed the office of former deputy prime minister Issam Fares, with whom he was very close.

Sunni Bassam Mawla was a judge of the Chamber of First Instance in Beirut before heading the North Lebanon criminal court, the NNA said.

Born in the town of Kfarshima south-east of Beirut in 1954, Maurice Salem joined the military college in 1972, eventually graduating into the artillery corps at the rank of lieutenant, said the NNA.

His final position in the army was Head of Military medicine, until his retirement at the rank of brigadier in 2012. His time in the military included a period of study at the US staff college at Fort Leavenworth.

Youssef Khalil is the director of the Lebanese central bank’s Financial Operations Department.

The website of the Lebanese microfinance association, over which he presides, says that he obtained a doctorate in France from the Centre of Studies and Research in International Development and joined the central bank in 1982 as an economist.

Mr Salam is a corporate lawyer and economist with a degree in leadership and management from the Harvard Kennedy School, the NNA said. He is a former vice-president for business development of the National-US Arab Chamber of Commerce.

A gastrointestinal surgeon, Firass Abiad has been the chairman of the board of directors of Lebanon’s largest hospital, the Rafic Hariri Hospital, since 2015. Mr Abiad studied at the American University of Beirut, where he obtained an MBA in 2013.

Mr Abiad shot into public consciousness as the face of Lebanon’s response to the coronavirus pandemic.

A recent profile in Slate magazine called him “Lebanon’s version of Anthony Fauci: a medical professional who offers data-driven assessments of the course of the pandemic at a time when many government officials seem asleep at the wheel”.

Mr Yassin is the current director of the crisis observatory at the American University of Beirut. The NNA said he obtained a doctorate in planning sciences from University College London in 2008 and directed the Issam Fares Foundation for public policy and international relations at AUB from 2019-2020.

Born in the village of Taraya in east Lebanon in 1977, Mr Hamieh holds a PhD in electronics and optical communications from the University of Western Brittany in France, the NNA said. He is a lecturer at a number of local universities.

Born in 1975 in the town of Chaat in the region of Baalbek, Mr Hajj Hassan is a former journalist who previously worked at France 24 in Paris. He studied law and political science in France, the NNA said.

One of Hezbollah’s ministers in the Cabinet, Mr Bayram has a diploma in public law, and a master’s degree in financial law from the Islamic University, the NNA said. Born in 1972, he was appointed head legal observer in the audit department of the Council of Ministers in 1998.

Minister of the Displaced: Issam Sharafeddine

Chosen by: Talal Arslan, head of the Lebanese Democratic Party

Born in the town of Aley in 1954, Mr Sharafeddine is a trained pharmacist who branched out into the business world in the 1990s when he started producing soaps, cosmetics and cleaning products, the NNA said.

He is a co-founder of beauty company Sharafeddine Industrial Laboratories and an adviser to Druze politician Talal Arslan, an opponent to Lebanon’s veteran Druze leader Walid Joumblatt, since 1991.

Born in 1950, Mr Qordahi holds a bachelor’s degree in law and political science from the Lebanese University, the NNA said. He worked as a journalist for MBC FM Radio in London and Lebanese television channel LBC. He has been awarded the title of Goodwill Ambassador for the United Nations Environment Organisation.

Born in 1965, Mr Hajjar holds a doctorate in dentistry from the Lebanese University, the NNA said. He has worked in NGOs including Caritas and Risala Assalam, which supports people with special needs.

Walid Fayyad holds a master’s in civil and environmental engineering from MIT, the NNA said. He has been managing director of the MENA division at international consulting firm Partners in Performance since 2019.

Born in the coastal town of Jbeil in 1968, Mr Nassar studied engineering at Beirut’s Saint Joseph University. The NNA describes him as a “founder of several companies in Lebanon and Saudi Arabia in the fields of engineering, contracting and project management”.

He recently worked as a consultant for Lebanon’s participation in the Expo 2020 Dubai.

Born in the village of Khenshara in the mountains north-east of Beirut, Ms Riachi is the only woman in Mr Mikati’s Cabinet.

Ms Riachi has served in a number of diplomatic positions, including as Lebanon’s permanent representative to the United Nations from 2007 to 2017, the NNA said. She holds two bachelor’s degrees from Lebanon’s Saint Joseph University in political and administrative sciences, as well as in history and geography. She directed the office of Lebanon’s minister of foreign affairs from 2012 to 2020.

Born in 1953, Brig Gen Kallas has held a number of administrative positions in Lebanese newspapers and universities, including editor of local daily Annahar’s culture pages and lecturer at the faculty of documentation and information at the Lebanese University, the NNA said.

Born in 1950, George Boujikian holds a bachelor’s degree in law and political science from the Lebanese University, according to the NNA. He worked as a journalist for MBC FM Radio in London and Lebanese television channel LBC. He was awarded the title of Goodwill Ambassador for the United Nations Environment Organisation.

A Former Judge, Vice-Chairman of the Board of Directors and Legal Counsel of the Bank of Beirut and the Arab Countries (BBAC) and Professor at St. Joseph University, Beirut (USJ). Mr. Halabi holds a degree in French and Lebanese Law from the St. Joseph University, a diploma in European Community Law from the European University Center of Nancy (France), a diploma in Comparative Law from the International Center of Comparative Law of Paris, a diploma from the Institute of Judicial Studies in Lebanon and a diploma of Higher Specialized Studies (DESS) in private law from Paris X Nanterre (France).

Mr. Halabi is also  the President and co-founder of the “Arab Islamic- Christian Group for the Islamic-Christian Dialogue”, Vice-President of the “Lebanese National Commission for UNESCO”, President of the Alumni Association of the Faculty of Law and Political and Economic Sciences of the Saint Joseph University “and  Chairman of the Board of Directors of “Ain W Zein Medical Village” .Mr. Halabi is also  the author of numerous books and articles and studies for local and regional dailies and periodicals.