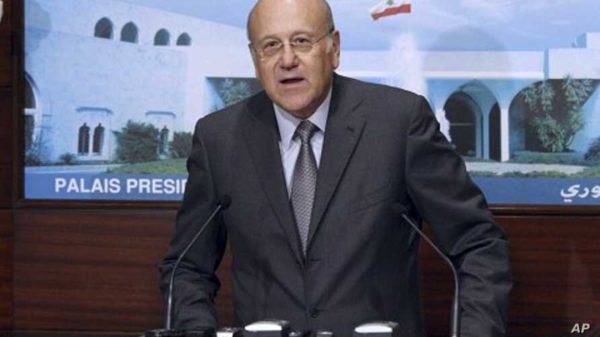 File photo: Lebanese Prime Minister-designate Najib Mikati said on August 2 that he had hoped for a quicker pace towards the formation of a new government and warned that his efforts would not be open-ended. August is behind us and so far no white smoke expected anytime soon
Share:

MTV sources revealed that “the Director General of Public Security, Major General Abbas Ibrahim, visited Prime Minister-designate Najib Mikati and President Michel Aoun to suggest to them the names of Christian ministers as chosen by Hezbollah to end the cabinet formation impasse.

Pro Hezbollah journalist Salem Zahran revealed that the result of Ibrahim’s meeting with Aoun and Mikati were positive in ending the impasse.

Prime Minister-designate Najib Mikati’s sources revealed that he “is making every effort to form a government as quickly as possible” and that the time frame that Mikati had set for himself in forming the government is finally coming to an end.

Many media reports revealed that Aoun’s son-in- law Gebran Bassil is the one obstructing the formation of the government, but Bassil’s sources denied the reports .

Future Movement Deputy head Dr Mustafa Alloush admitted that the cabinet’s formation remains “complicated,” accusing Aoun of “bargaining with the world” to lift the sanctions against Bassil in exchange for his demand of a blocking one-third in the cabinet”

There is increased concern over the possibility of Mikati’s failure in forming a cabinet . Such a failure will have negative consequences that outweigh those that followed the failure of his predecessors, who tried to form new governments. He could reportedly be the last PM designate that the Sunnis of Lebanon will be willing to propose .

But analysts are of the opinion that Hezbollah has been the party behind the impasse . One analyst told Ya Libnan, “president Aoun is powerless and is doing what Hezbollah tells him to do , adding “Hezbollah has received the green light from Iran to form the cabinet prior to the arrival of the fuel ship”

The question on everyone’s mind in Lebanon is: Will Tuesday’s meeting in Baabda give birth to the new government or it will be another day of failure .

The most important question however will be “will Hezbollah allow this new government to implement the needed reforms ?”