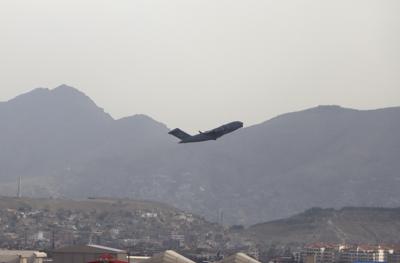 A U.S. Air Force aircraft takes off from the airport in Kabul on Aug. 30, 2021.Aamir Qureshi / AFP – Getty Images
Share:

The final flight capped a bloody and chaotic end to the conflict, as fighting and terror attacks amid the evacuation scramble left hundreds dead.

By Rebecca Shabad and Shannon Pettypiece

WASHINGTON — The Pentagon said Monday the U.S. had completed efforts to evacuate its remaining civilians and troops from Afghanistan, effectively ending the longest war in American history.

“I’m here to announce the completion of our mission in Afghanistan,” Marine Corps General Kenneth McKenzie told reporters in a virtual briefing. “The last C-17 took off at 3:29 pm.”

The departure of the last U.S. plane from Afghanistan capped a bloody and chaotic end to the conflict. In the war’s final weeks, fighting and terror attacks amid the scramble to evacuate thousands of Americans and Afghans left 13 service members and hundreds of civilians dead. The U.S. is not expected to have any diplomatic or military presence in the country after this point, officials said.

President Joe Biden has faced some of the harshest criticism of his presidency from both Republicans and Democrats since the Taliban took control of the country on Aug. 15. But he has stood behind his decision to pull all U.S. troops out of the country by the 20th anniversary of the Sept. 11 attacks, saying it was no longer in America’s interest to keep troops on the ground in Afghanistan.

“The president stands by his decision to bring our men and women home from Afghanistan,” White House press secretary Jen Psaki said Monday.

Biden is expected to make remarks on the end of the war in the coming days, Psaki said.

The U.S. had also rushed to evacuate Afghan allies before troops were expected to leave midnight Tuesday local time, Monday afternoon in the United States. Pentagon officials said Monday that they would not reveal details about when the final evacuation flights would take place for security reasons.

Asked then what they would tell Americans who still wanted to leave, Pentagon spokesman John Kirby said only: “There is still time.” Psaki said the administration remained committed to getting all those who wanted to leave Afghanistan out of that country, even beyond the Aug. 31 deadline.

“Our commitment is enduring and our commitment does not waver even as we bring the men and women from our military home,” Psaki said.

The evacuation continued “uninterrupted” Monday, the White House said, despite a barrage of rockets that had been fired toward Kabul’s Hamid Karzai International Airport.

On Sunday, about 250 Americans remained in Afghanistan and were seeking to leave the country, according to a State Department spokesperson, who said that assistance was being coordinated “around the clock for this group.” The official said that those Americans might already be at the airport in Kabul or “in the process of being guided there, and all have information on how to reach us.”

The State Department was also in touch Sunday with about 280 additional people who identified themselves as Americans but were either undecided about leaving Afghanistan or said that they did not intend to leave.

Since the Taliban rapidly seized power last month, around 5,500 American citizens had been safely evacuated, the official said.