What happens to the US military equipment left behind in Afghanistan to the Taliban? 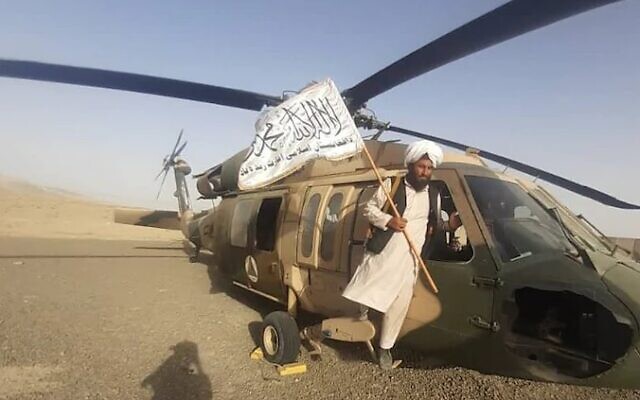 A Taliban member poses atop a US US-60 Black Hawk helicopter in Afghanistan, August 2021.
Share:

Amid the chaos of the Taliban takeover in Afghanistan as the U.S. ends its longest war and withdraws, a few key questions remain — including what life will be like under the new regime and what will happen to vulnerable Afghans trying to leave.

Another question: What will become of all the military equipment left behind?

Forbes reports that the U.S. has provided an estimated $83 billion in training and equipment to Afghan security forces since 2001, when America invaded.

According to Reuters the total spent included $28 billion in weapons from 2002 to 2017.

Exactly how much of that equipment is still in Afghanistan, in Taliban hands following the collapse of Afghan national army and still operable — all of that remains unclear.

Citing a source, Reuters reported that the U.S. believes the Taliban now has at least 2,000 armored vehicles and up to 40 various aircraft from the American-supplied equipment.

Earlier this month, photos circulated showing Taliban fighters had seized Black Hawk helicopters, which can cost upwards of $20 million each, and A-29 Super Tucano attack aircraft. (There were other reports that several dozen of these aircraft were in neighboring Uzbekistan and out of reach as the Taliban advanced.)

Though it’s near-impossible to operate such armaments without proper training and continued logistic support, the photos of Taliban militants driving Humvees and armed with U.S.-made M16 rifles struck a chord with many.

“When an armed group gets their hands on American-made weaponry, it’s sort of a status symbol. It’s a psychological win,” Elias Yousif, deputy director of the Center for International Policy’s Security Assistance Monitor, told The Hill.

One retired Army general described it as “more like trophies” to Reuters.

Arms like the machine guns and mortars and the night vision goggles, however, may prove more useful.

Other reports — such as the Taliban selling armored vehicles on social media — are false.

The White House, meanwhile, hasn’t specified exactly how much equipment is in the possession of the Taliban and officials have suggested they might not even know yet.

“We don’t have a complete picture, obviously, of where every article of defense materials has gone, but certainly a fair amount of it has fallen into the hands of the Taliban,” the White House national security adviser, Jake Sullivan, said in a recent briefing. “And obviously, we don’t have a sense that they are going to readily hand it over to us at the airport.”

On Aug. 18, a group of Republican senators demanded a “full accounting” of all the U.S. military equipment left in Afghanistan.

In a letter to Secretary of Defense Lloyd Austin, the lawmakers requested information on “what military equipment has been seized by the Taliban, an assessment of how long it will take the Taliban to use each of the captured equipment,” and whether the Biden administration was making any efforts “to recapture or destroy equipment that remains in Afghanistan and is at risk of being used by terrorist entities.”

According to Sullivan, the Black Hawk helicopters that were distributed as recently as July, during the U.S. draw-down, were intended for Afghan forces and came at the specific request of Afghan President Ashraf Ghani, who then fled the country as the Taliban began to move into the capital of Kabul.

“Those Black Hawks were not given to the Taliban. They were given to the Afghan National Security Forces to be able to defend themselves at the specific request of President Ghani, who came to the Oval Office and asked for additional air capability, among other things,” Sullivan said. “So the president had a choice. He could not give it to them with the risk that it would fall into the Taliban’s hands eventually, or he could give it to them with the hope that they could deploy it in service of defending their country.”

Sullivan continued: “Both of those options had risks. He had to choose. And he made a choice.”