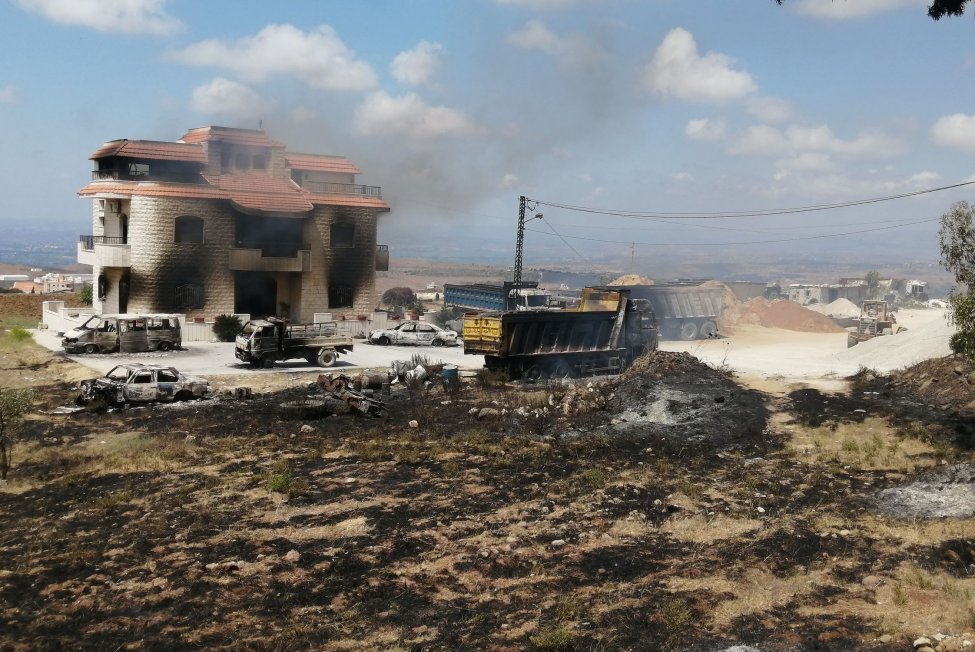 A view of a burnt house and vehicles of the man who owned the fuel tank that exploded in Akkar, northern Lebanon, on Sunday. Photo by EPA-EFE
Share:

“Confiscating fuel tanks, controlling power stations, storming hospitals with guns to force treating a patient and not respecting the law … this is simply chaos.”

BEIRUT, Lebanon, Aug. 17 (UPI) — Severe fuel shortages and a flourishing black market have spurred people in Lebanon to seize gasoline tanks, storm electricity stations and even burn the house of a man held responsible for a deadly petrol tank blast.

Most of the gasoline stations closed, and diesel fuel to power generators was a rare find outside an uncontrollable black market at exorbitant prices.

Although Salameh said that more than $800 million was spent on a three-month supply of fuel imports in the last month, he said there was no diesel, gasoline or electricity because the central bank had been obliged to finance traders who were not delivering their product to the market.

With foreign reserves falling to $14 billion, the governor said he would remain firm on his decision unless a parliamentary vote legalizes the use of the compulsory reserves, a portion of deposits that must be preserved by law.

The fuel shortage, which has been blamed on smuggling, hoarding and the government’s inability to secure needed imports, has increased the anger of a drained population fighting a total power blackout. Hospitals, bakeries and many businesses have been forced to scale back operations or shut down.

Footage of angry people confiscating trucks carrying gasoline and diesel passing through their areas or villages have been widely circulated on social media.

The Lebanese Army started to storm closed gas stations, hiding fuel and distributing it to jubilant residents and desperate hospitals and bakeries.

A tragic accident, however, occurred Sunday morning when a fuel tank confiscated by the Army in the town of Tleil in the northern Akkar region exploded while some 200 people were gathering with their plastic jugs to carry a share of the 60,000 liters of gasoline. More than 28 people were killed and nearly 80 were wounded, many suffering severe burns. The cause of the blast was not immediately known.

The next day, an angry mob set ablaze the three-story house and vehicles of the owner of the warehouse where the explosion occurred.

With private generators shutting down and the state electricity company barely able to provide power for a couple of hours a day, Lebanon has gradually plunged into darkness. Suffocated by the summer heat, small groups of residents in various areas stormed eight power stations and began to provide more electricity to their neighborhoods at the risk of disturbing what remains of the company’s power supplies.

“It is an unorganized chaos moving from one area to another,” Marwan Charbel, a retired brigadier-general and former interior minister, told UPI. “Confiscating fuel tanks, controlling power stations, storming hospitals with guns to force treating a patient and not respecting the law … this is simply chaos.”

The fear is that such chaos will increase as long as the political system is in disarray, said Riad Kahwaji, a Dubai-based Middle East security and defense analyst who heads the Institute for Near East and Gulf Military Analysis.

“It is a natural degradation of the living conditions that will naturally reflect immediately on the public security. People no longer trust the government authorities, no longer have faith in the security services,” Kahwaji told UPI. “Therefore, they will take the law into their own hands, and they are going to do what they have to do… what they feel is just for them.”

He warned that people will become more desperate and “with desperation we are going to see lots of incidents” at a time the security services have “limited capabilities to deal with different incidents happening at the same time.”

Security sources, however, said the security forces will keep protecting the population and easing the chaos that might lead to people taking the law into their hands, “which is the most dangerous thing that could happen.”

“It is a difficult situation for all — citizens and the security forces, who also suffer from power cuts and dwindling salaries,” the sources told UPI on condition of anonymity. They dismissed fears of security deterioration, but acknowledged, “Some acts to secure fuel and other essentials are leading to some chaos.”

They also dismissed fears that some terrorist organizations would exploit the deteriorating living conditions to infiltrate Lebanon, saying, “There is no such danger, and the security forces have scored many successes in foiling any such attempt.”

The sources said the army and other security forces have stepped up efforts to combat smuggling and the black marketeers after “things reached a red line with hospitals, bakeries and other vital sectors closing or scaling down their operations” because of the fuel shortages.

“Our efforts will continue, and this will help suppress the black market,” the sources said. “The black marketeers have suffered losses when their hidden fuel and other products were confiscated and their hiding place disclosed.”

However, the only way to halt the country’s deterioration and avoid further chaos is the formation of a new Cabinet and the political leaders ending their disputes.

“The severity of the situation necessitates forming a government today, but will they do it? These leaders are the most corrupt, irresponsible, inept people the country has ever seen,” Kahwaji said.

Prime Minister-designate Najib Mikati was still trying to find a formula acceptable to all parties that will help pave the way for a new government. He has held 11 meetings with President Michel Aoun since he was named to head the new Cabinet on July 26.

“The solution is to stop the political disputes,” Charbel said. “If the Cabinet is not formed this week, we are going to have big problems.”

Feeling the impact of the crisis that started to also widely affect his own Shiite followers, Hassan Nasrallah, leader of the Iran-backed Hezbollah, urged on Sunday the formation of a new Cabinet within two to three days. He announced that his group will start importing diesel and gasoline from Iran to alleviate the fuel crisis.

“It was a clear message to stop stubbornness  and put aside personal interests,” said Johnny Mounayar, a journalist and political analyst, referring to Aoun and his son-in-law Gebran Bassil, who heads the Christian Free Patriotic Movement.

“Apparently, Aoun still wants a blocking third to control the government and has his own calculations concerning Bassil” to secure his political future, Mounayar told UPI. “The Cabinet issue is very complicated, with Aoun giving contradictory signals… It is not clear what will happen.”