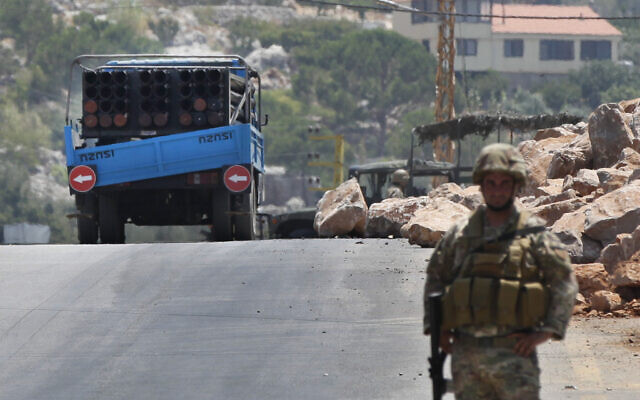 A Lebanese army soldier stands next to a rocket launcher placed on a pick up truck that was used by Hezbollah to fire rockets near Israeli positions, in the southeastern village of Shwaya, near the border with the Golan Heights, Friday, Aug. 6, 2021. The militant Hezbollah group said it fired a barrage of rockets near Israeli positions close to the Lebanese border on Friday, calling it retaliation for Israeli airstrikes on southern Lebanon a day earlier. Hezbollah said in a statement on Friday that angry Druze villagers intercepted Hezbollah fighters in Shwaya at 11:15 a.m. after they fired rockets at Shebaa Farms , in a response to Israel’s previous attacks. The Druze villagers accuse Hezbollah of firing rockets from the eir residential areas (AP Photo/Mohammed Zaatari)
Share:

The Iran-backed Hezbollah militant group said in a statement on Friday that a number of citizens intercepted Hezbollah fighters in Shwaya at 11:15 a.m. after they fired rockets at Shebaa Farms , in a response to Israel’s previous attacks.

A video widely shared on social media showed angry Druze villagers blocking the truck’s passage and accusing Hezbollah of endangering their lives by launching rockets from close to residential areas, which is prompting Israel to fire back at the residential areas

Hezbollah responded by claiming that they had targeted open areas “in order to preserve the security of citizens.”

The statement stressed that “Hezbollah has been and will remain keen on protecting its people and not to expose them to any harm during its resistance work.”

A force from the Lebanese army and army intelligence agents later arrived in Hasbaya, and confiscated the truck carrying the rocket launcher.

The truck was carrying 32 rockets, 21 of which were fired into the occupied Shebaa Farms and the Golan Heights, media reports said.

Former PM Saad Hariri on Friday described the situation on the Lebanese-Israeli border as “very, very dangerous,” after Hezbollah and Israel traded fire across the volatile frontier.

“It represents an unprecedented threat to (U.N. Security Council) Resolution 1701,” Hariri added in a statement.

Similarly Lebanese Forces leader Samir Geagea tweeted Friday, after cross-border rocket fire exchanges between Hezbollah and Israel, that “what is happening is very dangerous, especially amid the great tension in the region.”

He added that the Lebanese are already suffering and warned that “playing with fire” might “eradicate the rest of the Lebanese population.”

He called on Hezbollah “leave the Lebanese people alone” and not to add “bigger” and “more terrible and painful” tragedies to the tragedies they are already living.