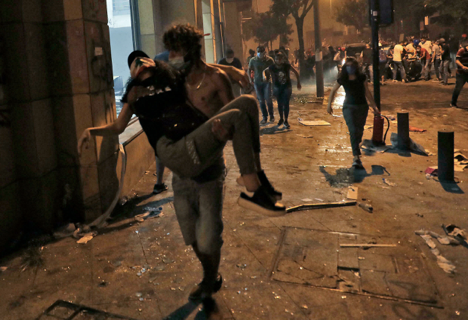 Public anger in Lebanon is mounting a year after the August 4, 2020, Beirut blast, with a stalled investigation, crippling economic crisis and political sclerosis. Amid an increasing crackdown on dissent and freedom of expression, it’s a combustible mix for a country gripped with grief and outrage.

The Saturday after the August 4, 2020, Beirut blast, Hussein El Achi and his fellow activists gathered at Martyr’s Square in the heart of the Lebanese capital to protest the government negligence that caused the deaths of more than 200 people when a stock of 2,750 tons of ammonium nitrate dumped in the port exploded.

They were joined by tens of thousands of people, still in a state of mourning and loss, demanding accountability for the latest crisis to hit Lebanon.

“We walked there thinking that after all of this – some of our closest friends had died in the explosion – that the security forces would not be brutal with us because this is our right, we were in mourning. But we were naïve,” recounted El Achi nearly a year later.

As protesters, in an outpouring of anger, began occupying ministry buildings and attempted to enter parliament, the security forces reacted with terrifying violence.

El Achi and his friends were part of an opposition movement that began in October 2019, when anti-government protests over Lebanon’s economic crisis erupted across the country. They were familiar with the use of batons, tear gas and rubber bullets by security forces. But they were not prepared for a new arsenal that wounded around 700 protesters, 158 of whom had to be hospitalised.

Security forces that day deployed bullets and projectiles packed with pellets that scattered upon impact, causing internal bleeding and organ damage in some serious cases, leading international human rights groups to condemn the “excessive and at times lethal force”.

The August 8, 2020 crackdown exposed the suppression of dissent in a country seething with public anger over crippling economic and political crises, endemic corruption, and a galling interference in an investigation into the Beirut blast.

It was largely overlooked by an international community consumed by the pandemic and convinced by Lebanon’s prevailing image as a relatively free country in a repressive neighborhood.

But as Lebanon marks the first anniversary of the Beirut blast, the threat of insecurity amid mounting public outrage is alarming analysts.

Since the 1975-1990 civil war ended, the country has averted a descent into all-out conflict, sustained by a collective will to avert a repeat of the sectarian strife. The latest threat, though, does not lie between Lebanon’s different communities, but against political elites and their cronies who are stalling calls for a change to the post-civil war system that has enriched them while impoverishing citizens outside their privileged circles.

Firefighter, not the president, turns consoler-in-chief

Over the past two years, Lebanon has suffered a perfect storm of crises including an economic collapse that has contracted GDP by 20 percent, the Covid-19 pandemic, the Beirut port blast, and a political stalemate following the resignation of Hassan Diab – who continues as prime minister in a weak, caretaker capacity.

The most emotive grievance though has been the dogged refusal of 87-year-old Lebanese President Michel Aoun to allow an international investigation into the August 4, 2020, blast.

Meanwhile, a domestic probe has been plagued by “a range of procedural and systemic flaws,” according to a Human Rights Watch report released on the eve of the first anniversary of the Beirut blast. The flaws include “a lack of judicial independence, immunity for high-level political officials, lack of respect for fair trial standards, and due process violations,” noted the summary of the 710-page report.

The rage over the lack of accountability has played out at the fire station in Beirut’s neglected Karantina district over the past 12 months.

Situated right by the port, the Karantina fire station today has turned into the Ground Zero of the Beirut blast after nine firefighters and a paramedic perished in the explosion. The Platoon Five team – along with paramedic Sarah Fares – had rushed to the port immediately after receiving a call that a fire had broken out in Warehouse 12.

Unaware of the 2,750 tons of ammonium nitrate stored there, the team was at the warehouse door when the explosion occurred, killing all of them. Mobile phone footage recorded by the team was subsequently retrieved from the blast site.

Posters of the 10 fallen heroes are plastered on the gates and walls of the fire station, which has turned into a shrine-cum-protest spot for the families of the blast victims.

For a year now, First Lieutenant Ali Najem, public relations chief of the Beirut Fire Brigade, has played consoler-in-chief – a role Lebanon’s political leaders have relinquished due to their unpopularity.

Protesters gathering at the fire station to demand justice are met with empathy by the firefighters who lost their comrades in the blast. “Every day they come here, every day they cry here, every day they shout from here, demanding an investigation. They ask us, ‘why was my child, my father, my brother killed?’ They want to know. I hope to God to know. But in one year, there’s been nothing,” said Najem.

For senior fire officials, an investigation is necessary to identify the communication lapses that left the Beirut fire service in the dark about the giant ticking bomb stored at the port. This is crucial for the service to plan coordinated responses in the future.

“Had they told us what was inside, we would have conducted an evacuation of the area,” explained Najem. “Every fire is different and there are different ways that you can deal with it. In our world, there will be more fires, but we have to know first what we are dealing with to keep our firefighters safe and keep the public safe.”

Mourning ‘could explode into anger’

Accountability and victim commemorations are set to dominate the agenda this week, marking the first anniversary of the Beirut blast. But there are no guarantees that there won’t be disturbances on the street.

One year later, no senior official has been brought to account, angering many Lebanese. The investigation is stalling as requests by the lead investigating judge to lift immunity and question top officials are hampered.

At a press conference in Beirut on Monday, Ibrahim Hoteit, a spokesman for an association of the families of blast victims, gave the authorities 30 hours to lift the immunity of top politicians named for questioning.

“You have 30 hours to make a decision on immunities, and we hope you will make the right decision or face a bone-crushing response,” said Hoteit, who lost his brother, Tharwat, in the blast.

Hoteit also stressed that officials cannot ask the families of the victims to “calm the street”, noting, “We are not your employees and we are not here to prevent the Lebanese from expressing themselves in any way possible.”

The mourning, Hoteit warned, “could explode into anger at any time”, adding, “we are done with peaceful protest movements and we are heading towards confrontational movements.”

Bickering politicians ‘agree to share the spoils of the looting’

Lebanon currently has the elements for future unrest, says Karim Emile Bitar, director of the Institute for Political Science at St. Joseph University, Beirut. “What I’m worried about is that in the entire history of political science, whenever there is a country that has a massive GDP contraction, it is almost always followed by civil unrest, by insecurity in the streets and sometimes by a full-fledged war,” he said.

Bitar believes Lebanon will avert “a full-fledged civil war because the balance of power is completely in favour of Hezbollah”, referring to the Shiite movement, which was the only group allowed to keep its arms after the 1975-1990 civil war.

But he warns that “in the fall or in six months, if we still do not have a government, if we still have not restored confidence, we could have civil unrest and potential insecurity in several cities.”

Lebanese billionaire businessman Najib Mikati is the third candidate designated to be prime minister over the past year. The political horse-trading has meant a weak, caretaker administration has been left to handle an economic crisis that the World Bank has called one of the world’s worst in 150 years.

Politics in Lebanon moves at a glacial pace with political parties haggling under a power-sharing system dating back to French colonial rule.

But while parliament and coalition governments bicker over the “division of spoils of the political pie, they all gang up to form a solid collective group to confront the opposition movement,” notes Bitar.

Lebanese civil society and opposition movements have long called for the scrapping of the confessional system that sees various ministries controlled by different parties doling out positions to supporters in what the Lebanese call wasta. This in turn sparks the sort of chronic negligence that enabled the Beirut blast.

But the old sectarian players invariably come together to maintain the system, explains Bitar. “Even some political parties favoured by Iran, and others closer to Saudi Arabia and the US definitely agree when it comes to sharing the spoils of the looting,” said Bitar.

‘A serious deterioration of human rights’

As the dissatisfaction against the system mounts, so have the crackdowns against dissenters.

“We have witnessed a serious deterioration of human rights in Lebanon in the past couple of years,” said Bitar. “Historically, Lebanon was one of the most liberal countries in the Middle East – you had freedom of expression, freedom to demonstrate etcetera. Today, it is no longer the case. Many activists – over 60 activists in the past few months – have been detained simply because they posted stuff on Twitter or on Facebook, or because of their political opinions.”

The country’s Cybercrimes Bureau conducted 4,154 defamation investigations between January 1, 2015 and December 7, 2020, Human Rights Watch reported, in a country of around 6 million people.

“For decades, we had a flawed political system, but contrary to what was happening in Syria and Iraq, you could joke on the Internet without being arrested. But in the past two years, we have seen dozens of people being summoned by the so-called Cybercrimes Bureau. They have this weird definition of cybercrimes – if you criticise, for example, a political leader on Facebook, it’s considered a cybercrime and you can be detained and interrogated for hours,” noted Bitar.

Legal harassment is a common strategy deployed against civil society and opposition groups, according to El Achi, a lawyer and one of the leaders of the Minteshreen opposition movement. “Every single week, Minteshreen members are called in for questioning over tweets or shaming politicians online. Usually, they let them go after keeping them from morning to evening. But we’re losing time and resources because we all have to go and protest. We lose days every week on this,” he explained.

Nearly a year after the August 8, 2020, crackdown, none of the security officials present on Martyr’s Square have been held criminally liable despite footage and photographs of the events. The impunity however is unlikely to stop protesters taking to the streets since most Lebanese believe the lack of accountability is the root cause of the hardships they face and they remain united in their quest for justice for the victims of the Beirut blast.