Lebanon secures $370m in donations at aid conference in France 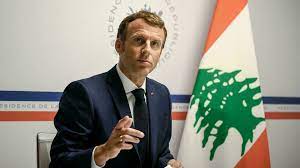 The International donor conference that was led by French President Emmanuel Macron raised $370 million in aid for Lebanon on the first anniversary of the Beirut Port explosion . He blamed the corrupt and impotent Lebanese leaders for the blast
Share:

By Ross Cullen in Paris

International donors have pledged $370m in aid for Lebanon, at a conference that was timed to coincide with the first anniversary of the devastating blast in the capital, Beirut.

France and the United Nations were the joint hosts of the online event, which gathered dozens of world leaders.

French President Emmanuel Macron was the first overseas leader to visit the Lebanese capital after the explosion last year.

More than 217 people died in the blast and more than 6,500 others were injured after improperly stored ammonium nitrate exploded on August 4, 2020, sending a deadly shockwave through the city.

Macron said France would pledge $119m in emergency aid for Lebanon and 500,000 doses of COVID-19 vaccines for the country.

But despite the agreements on financial support, Macron said he would not be writing any blank cheques for the Lebanese political class, who he blames for their country’s economic turmoil and the inertia on recovery action since the blast.

“I still think that the crisis Lebanon is experiencing is not a stroke of bad luck or fate,” the French president said.  “It is the fruit of individual and collective missteps, and unjustifiable dysfunction.

“It has resulted in an absolute failure of a model that has turned away from the public good and the general interest.

When hundreds of tonnes of highly explosive ammonium nitrate fertilizer ignited on August 4 2020, it was one of the largest non-nuclear explosions in history.

But the blast came on top of a deep and ongoing financial crisis, failing and broken national infrastructure and then the coronavirus pandemic.

“Lebanon is currently going through the hardest times – a record poverty rate, the COVID-19 pandemic, a severe shortage of drugs, along with the heavy burden of Syrian displacement, the siege imposed around us depriving Lebanon of its vital extension and so on,” said Lebanon’s President Michel Aoun, who was also taking part in the conference.

“Therefore Lebanon can no longer wait for regional or broader solutions.”