EU foreign ministers meet for talks on Mozambique and Lebanon 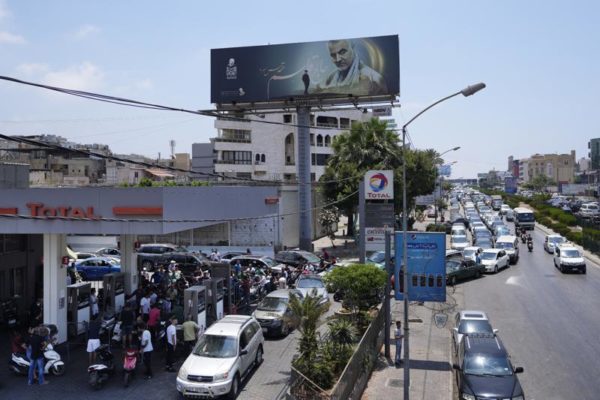 Drivers wait in a long line to get fuel at a gas station under a billboard showing Iranian Revolutionary Guard Gen. Qassem Soleimani, who was killed in Iraq in a U.S. drone attack in early January 2020, along the airport highway, in the southern suburbs of Beirut, Lebanon, Sunday, June 27, 2021. On Friday, Hassan Diab, Lebanon’s caretaker prime minister, granted his approval to allow the financing of fuel imports at a rate higher than the official exchange rate, effectively reducing critical fuel subsidies that have been in place for decades, amid worsening gasoline shortages. (AP Photo/Hassan Ammar)
Share:

An insurgency in Mozambique and the worsening economic situation in Lebanon are the main topics on the agenda. The EU’s top diplomats are also due to discuss Ethiopia, Afghanistan and UN policy.

Foreign ministers from the European Union’s 27 member-states are trying to find a united approach on major foreign policy issues during talks in Brussels on Monday.

With strife brewing in both Mozambique and Lebanon, a peace mission and sanctions are the main issues on the agenda. DW takes a look at today’s ongoing talks.

What are the plans for the Mozambique mission?

The bloc’s foreign ministers have formally approved a military training mission to Mozambique after EU defense ministers already agreed to send troops to the area in May.

The mission will initially last for two years. Its main goals are to provide military training and expertise on counter-terrorism and civilian protection effort, according to an EU statement.

The East African nation is experiencing a volatile insurgency, with Islamist extremist rebels carrying out attacks in the country since 2017.

The Mozambique mission is facing up to a volatile insurgency and EU defense ministers already agreed to send troops to the area in May.

Over 530,000 people have been displaced due to the violence, according to the UN Refugee Agency, with a severe lack of food complicating aid efforts.

The blocꞌs foreign affairs chief, Josep Borrell, had indicated in May that the mission will take a similar form to military missions already set up inMali, the Central African Republic and Somalia.

Portugal, has already sent a military training mission, making the most of its colonial connections with the southeastern African nation that facilitate communication and logistics.

However, countries like Germany and the Netherlands have said they do not want to send their troops.

What else is on the agenda?

The meetings began with discussions on the latest developments in Afghanistan, the South Caucasus and Lebanon.

Discussions on European Union priorities for the 76th General Assembly of the United Nations and a Globally Connected Europe will also take place.

Ministers will then exchange views with the Israeli Minister of Foreign Affairs, Yair Lapid, over lunch.

One of the more contentious topics foreign ministers will discuss is potential sanctions against Lebanese officials after the countryꞌs caretaker leader made a desperate call for help.

Why do ministers disagree over Lebanon?

One of the major sticking points of the talks concerns planned sanctions against Lebanese politicians.

The sanctions are seen as a way to censure the politicians for failing to come to an agreement on forming a new government — seen as one of the main hurdles in resolving country’s economic crisis.

However, some foreign ministers disagree with the sanctions, pointing to judicial and technical questions as reasons for the democratic deficit in the troubled Middle Eastern country.

Lebanonꞌs economy has been in freefall since 2019. Attempts to form a new government have stalled, with political rivalries believed to be holding up progress.

The government resigned last year in the aftermath of the massive Beirut port explosion that killed over 200 people and sparked mass protests.