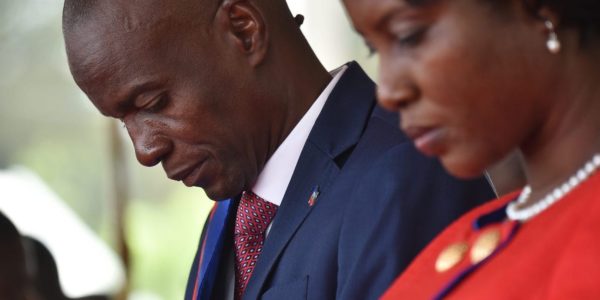 Haitian President Jovenel Moise is seen with his wife at the Te Deum during his inauguration ceremony at the National Palace in Port-au-Prince, on February 7, 2017. Hector Retamal/AFP via Getty Images
Share:

The wife of assassinated Haitian President Jovenel Moïse has spoken for the first time since a group of gunmen killed her husband, saying the late-night attack happened “in the blink of an eye”.

Martine Moïse was with her husband in their private Port-au-Prince residence early Wednesday when a group of assassins burst in and shot him.

In a voice message posted to her Twitter page on Saturday, Moïse said her husband was “riddled” with bullets and that the attack happened so quickly he was unable to “say a single word.”

“In the blink of an eye, the mercenaries entered my house and riddled my husband with bullets,” Moïse said in the voice note,according to the BBC.

“This act has no name because you have to be a limitless criminal to assassinate a president like Jovenel Moïse, without even giving him the chance to say a single word,” she continued.

Moïse herself was also shot and flown to Miami, Florida for treatment. The 47-year-old said she was in “a beautiful condition and very much alive,” according to the voice note.

She also suggested that her husband was targeted for political reasons, mentioning an upcoming referendum that would have made changes to the constitution that could have given the president more power.

“I am crying, it is true, but we cannot let the country lose its way,” she said, according to the BBC. “We cannot let the blood of President Jovenel Moïse, my husband, our president whom we love so much and who loved us in return, flow in vain.”

It is still unclear who exactly was behind the attack, which has been met with utter disbelief in the country.

At least six people — including two men believed to be Haitian Americans — had been arrested over the president’s killing as of Thursday. The police also killed four others in a firefight.

A recent video from Haitian police showed suspects being marched to jail.

Moïse took office in February 2017 after a tumultuous and prolonged election cycle. After his death, Haiti’s political future is even more up in the air.

Some top officials have asked US military troops to help protect the country’s port, airport, and gas supply.