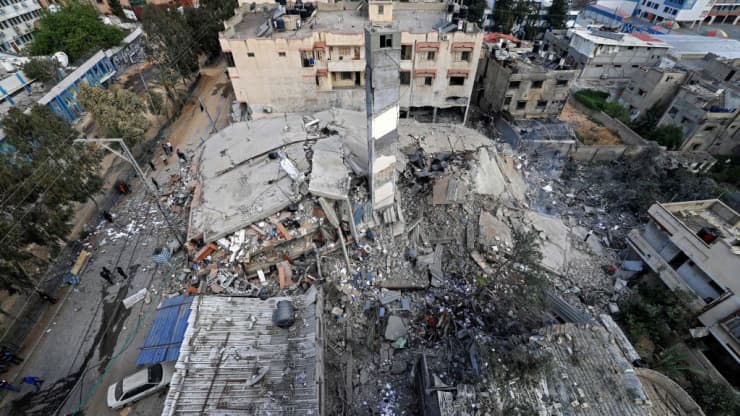 A view from above shows the destroyed six-storey Kuhail building which was targeted by an early morning Israeli airstrike on Gaza City on May 18, 2021.
Share:

The fighting between Israeli forces and the Palestinians continued into its ninth day Tuesday, with two Thai workers killed at a packaging plant in southern Israel overnight by rockets fired from Gaza, according to Israeli authorities. Health officials in Gaza recorded no overnight deaths in the Palestinian enclave for the first time since the violence began on May 10.

Mounting international calls for a cease-fire, including from U.S. President Joe Biden, went ignored as shelling and rocket attacks continue from both sides.

Israel’s military reported that 62 of its fighter jets dropped 110 guided bombs onto the Gaza Strip overnight and into Tuesday, saying its targets included Hamas leaders, its tunnel network and rocket launchpads. It also said that 90 rockets had been fired from Gaza overnight, making the latest total 3,440 rockets, the majority of which caused no casualties.

In Jerusalem, the Israeli-occupied West Bank and elsewhere in Israel, Palestinian protesters held a strike in support of Gaza.

Israel has said it would continue its offensive to take out Hamas and Islamic Jihad — U.S.-designated terrorist organizations — the former of which also governs the Gaza Strip, a 140-square mile strip of land housing 2 million people that has been under Israeli blockade since 2007.

But Israel’s offensive, which it says is targeted at Hamas, has led to 213 Palestinian deaths in Gaza as of Tuesday afternoon, including 61 children and 36 women, according to Gaza authorities. The violence between Israelis and Palestinians is the worst in the region in seven years, and Sunday — which saw Israeli fighter jets level three buildings in Gaza — has been the deadliest day since the latest hostilities began.

Rocket attacks from Hamas and Islamic Jihad have also continued. Israeli strikes on what it says are Hamas tunnel networks have collapsed underneath Palestinian homes, leaving families buried in rubble. Ten people have died in Israel, including two children, Israeli authorities said Monday.

Israeli Prime Minister Benjamin Netanyahu said in a televised address Sunday that Israel “wants to levy a heavy price” from Gaza’s Hamas leaders and that its offensive on the blockaded territory would “take time.” In a phone call between Biden and Netanyahu on Monday, the U.S. president reportedly called for a cease-fire, but did not demand an immediate stop to the violence from Israel’s military.

On May 5, before full-scale hostilities erupted but amid growing protests and clashes between Palestinians and Israeli forces, the Biden administration notified Congress of an intended sale of $735 million in precision-guided weapons to Israel, Reuters reported. Israel is the single largest beneficiary of U.S. military aid, at $3.8 billion annually. The State Department did not immediately reply to a CNBC request for comment.