Lebanon is on a ‘train to hell’ and ‘about to reach the last station,’ former government advisor says 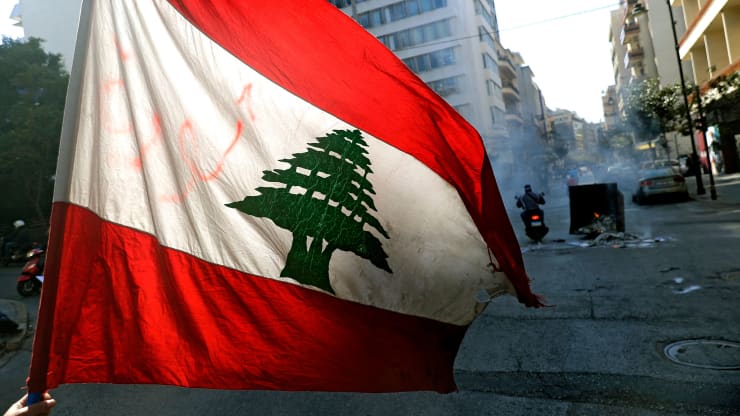 An anti-government demonstrator waves the national flag as they block the street, with burning garbage dumpsters, in front of Lebanon’s central bank in the capital Beirut on March 16, 2021, during a protest against the deteriorating economic situation. JOSEPH EID | AFP | Getty Images
Share:

The current mismanagement of Lebanon has put it on “train to hell” which is “about to reach the last station,” Henri Chaoul, a former advisor to the country’s finance ministry, told CNBC.

Chaoul, who had advised the government in its talks with the International Monetary Fund, resigned in June last year after Lebanon failed to make the reforms necessary to qualify for IMF assistance.

“This is not the government that will be good for the future of Lebanon,” Chaoul said.

“It is clear that the old business model, the old model of governance in Lebanon has completely failed on many levels,” Chaoul added. “We need to be able to rebuild.”

And Beirut is a city desperate to rebuild, with it still reeling from a port explosion that killed over 200 people and injured more than 6,000 last August. The investigation into the blast remains inconclusive nine months later.

Lebanon is facing its worst crisis since its bloody civil war of 1975-1990. Its currency has lost 90% of its value over the last 18 months on the informal market, and food inflation has reached 400%.

The country has also been hit hard by the coronavirus pandemic, with over 533,000 cases and over 7,500 deaths. Only 7% of the population has received the vaccine to date.

Subsidies on essential items like medicine, food and fuel are beginning to be withdrawn in order to restore the country’s dwindling foreign reserves.

A source close to the cabinet told CNBC Tuesday that “the position of the prime minister is that it is essential the card program be instituted before any subsidies are removed.”

The source added that the “mechanism of instituting a card program is complex to design and implement, and the funding of the card program has to come from the Banque Du Liban.”

Without a proper government in place, Lebanon cannot move forward and make the reforms necessary to unlock the aid it desperately needs.

The small Mediterranean country of nearly 7 million is on its third prime minister designate in a year after Diab resigned in the wake of the Beirut explosion. His successor, Mustapha Adib, resigned a month later. Diab’s caretaker government will likely remain in place until three-time premier Saad Hariri can form a new legislative, with talks currently still in deadlock over its composition. Hariri declined to comment on this article when contacted by CNBC.

For many across the country, there is no hope for change.

“We need to see a silver lining in this crisis and build a new social contract so that the young of Lebanon decide to stay in Lebanon and build their future,” Chaoul told CNBC. “There is no hope in Lebanon today.”

France steps back in

France’s Foreign Minister Jean-Yves Le Drian threatened to sanction politicians responsible for the deadlock in a visit to Beirut last week, and warned against “collective suicide” if the country continues to fail to form a government.

Paris has put measures in place to restrict entry to France for Lebanese officials hindering the country’s political progress.

Riad Salameh, the country’s central bank governor, also faces corruptionallegations in France over foreign investments, and is being investigated by Swiss prosecutors over suspected embezzlement and money laundering tied to the Banque du Liban.

Salameh maintains his wealth was acquired prior to taking his position as central bank governor in 1993, and his lawyer, Pierre-Olivier Sur, told CNBC that his client had been scapegoated.