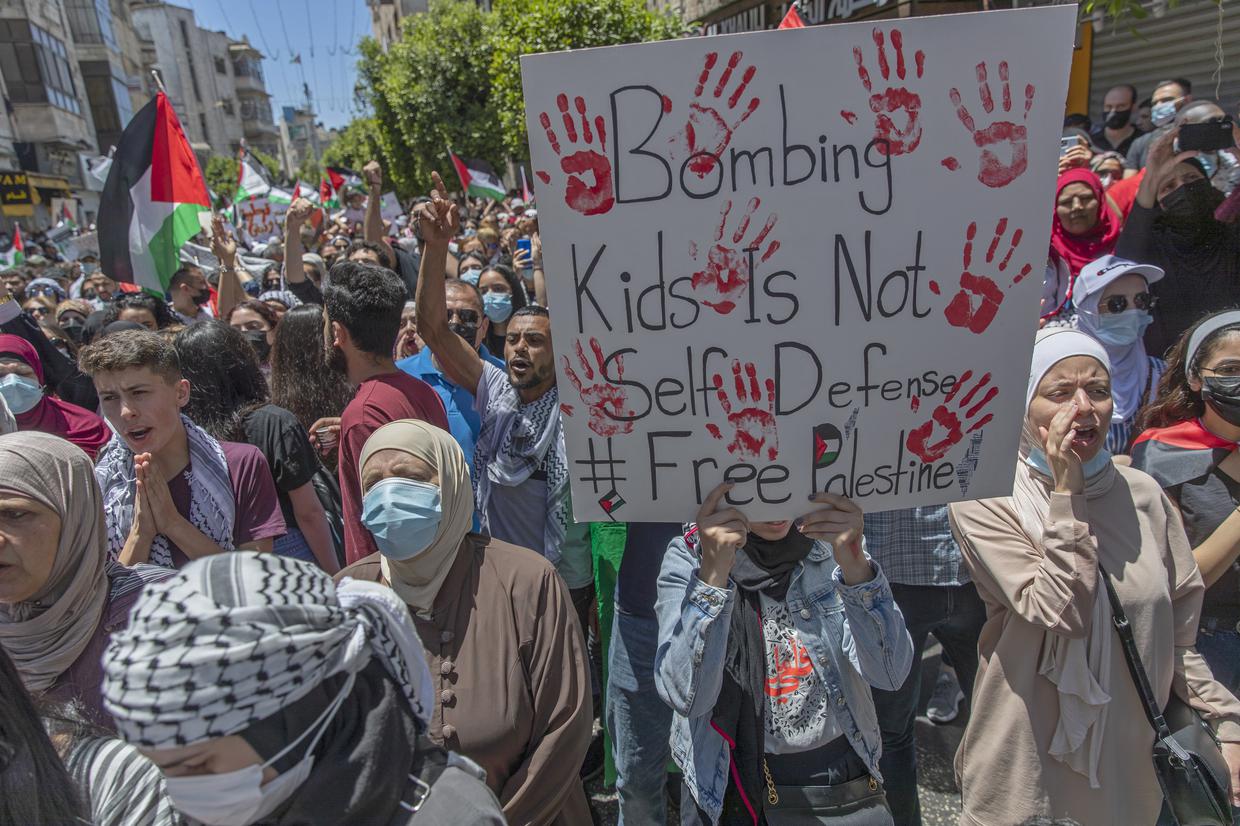 Palestinians chant slogans while while taking part in an anti-Israel demonstration during a general strike in the West Bank city of Ramallah . One banner read: ” Bombing kids is not an act of self defense” . This was in spoons to US president Joe Biden who defended Israeli actions as an act of self defense . Israeli forces killed hundreds of Palestinians including 61 children. AP/Nasser Nasser)
Share:

Israel has also thanked the Biden administration for blocking a U.N. Security Council statement criticizing its actions in Gaza.

By Alexander Smith and Saphora Smith

Dozens of Israeli jets launched more than 100 missiles into the Gaza Strip overnight as the fighting entered its second week and hours after President Joe Biden said he would support a cease-fire in the conflict.

The Israeli military said that the 110 guided missiles launched from 62 fighter jets had targeted the “metro,” a network of tunnels used by Hamas, the militant group that governs the tiny, impoverished Gaza.

At least 212 people, including 61 children, have been killed by the Israeli airstrikes over the past week, according to the Gaza Health Ministry. Fifteen Palestinians have been killed in clashes in the occupied West Bank.

During that time, Hamas has launched some 3,440 rockets from Gaza into Israel, killing 12 people, officials there said.

Israeli authorities said Tuesday that a decision had been made to stop trucks carrying aid from entering the blockaded Gaza Strip, after a mortar bomb hit a border crossing and other bombs were fired at a separate border junction as trucks entered the enclave.

The trucks contained medical equipment, animal feed and fuel tanks for use by international organizations in Gaza, according to officials.

The toll on civilians in the enclave has been high.

As well as the deaths and injuries, some 2,500 people in Gaza have been left homeless after at least 90 buildings including hundreds of housing units have been destroyed, according to a statement Monday by the United Nations Office for the Coordination of Humanitarian Affairs.

Schools and hospitals have been damaged, the agency said, including those run by international organizations such as Doctors Without Borders. One high-rise building destroyed by Israeli jets housed The Associated Press and the Al Jazeera news organizations.

“We are in war, we have entered a seventh day of war,” Matthias Schmale, director of operations at the U.N. Relief and Works Agency in Gaza, said in an interview. “The population is terrified, they’ve started moving from their homes because they no longer feel safe.”

He added that “no place in Gaza is safe.”

Meanwhile, a spokeswoman for the Israeli police said Tuesday that the service had received a report that a rocket had struck the Eshkol region, which borders Egypt and the Gaza Strip, causing a number of casualties.

The Israeli rescue service Magen David Adom reported that a rocket had killed two people and injured seven, one severely, in the region.

Israel’s Iron Dome missile defense system intercepts the vast majority of the rockets, and the population shelter in a network of shelters and safe rooms throughout the country.

Though Biden told Israeli Prime Minister Benjamin Netanyahu on Monday that he supported a cease-fire, he has so far resisted pressure, much of it from within his own Democratic Party, to criticize Israel’s actions.

The U.S. earlier blocked a statement by the United Nations Security Council that called for an end to “the crisis related to Gaza” and for the protection of civilians.

He said Israel’s sole aim was “to dismantle terror infrastructure and protect our people. This criticism of Israel is hypocritical and detrimental to the global fight against terror.”

Long-running tensions reignited last week after Israeli police raided Jerusalem’s Al-Aqsa Mosque compound while Palestinian worshippers were praying there during Ramadan, the Muslim holy month. Hamas responded by firing rockets into Israel, which has replied with its own bombing campaign.

On Tuesday, Israel said it struck “a number of rocket launching sites” that were aimed at Tel Aviv, Ashkelon and other cities. As well as the metro tunnel system, Israel said it hit the homes of several Hamas commanders, as well as a Hamas anti-tank squad and other infrastructure related to the militant group.

Netanyahu told Israelis on Sunday that they should be ready for an extended military campaign.

The Israeli military says it tries to minimize civilian injuries and deaths, and accuses Hamas of using people as human shields.

Hamas has continued to fire rockets, 90 percent of which are intercepted by the Iron Dome system, Israel says.

The rockets that have broken through have lit up the skies over cities such as Tel Aviv and caused people to flee into underground bomb shelters. A 5-year-old boy has been among those killed, as well as an Israeli soldier.

On Tuesday, Palestinians in Israel, Jerusalem and the West Bank observed a general strike to protest what activists and human rights groups say is a system of apartheid, of which the latest Gaza conflict is only one manifestation.

Israel adamantly rejects that characterization and accuses Hamas of inciting violence across the region.