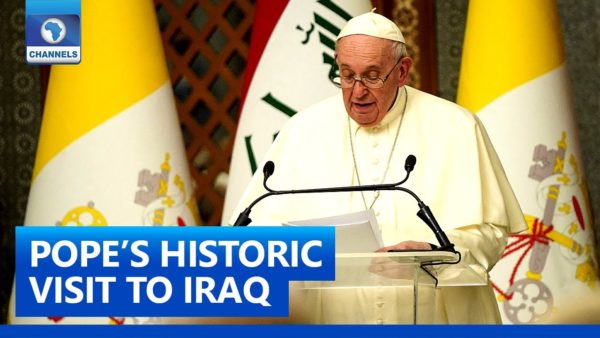 The Vatican has sought to make a papal trip to Iraq, the traditional home of Abraham and now a shrinking Christian minority, since 2000. Pope Francis ended his first day there with religious leaders.

After more than a year of staying home at the Vatican, Pope Francis landed today in Baghdad, his first international trip since the start of the pandemic. It’s an unusual visit, not just because of the timing with COVID cases on the rise in Iraq, but also because despite the country’s rich biblical history, despite its shrinking but significant Christian minority, a pope has never visited Iraq before. Well, NPR’s Sylvia Poggioli is traveling with the pope. She joins us now from Baghdad. Hi, Sylvia.

KELLY: How’s Day 1 of this trip gone so far?

POGGIOLI: It’s been quite something. It’s a long day. But in any case, at the airport, Pope Francis was given a really big, red-carpet reception with military band, all the works. His first stop was at the presidential palace. Lots of pomp and circumstance there, although not many people were wearing masks, and there wasn’t much social distancing, which the Vatican had insisted that, you know, all precautions would be observed.

In any case, in his speech there, he urged Iraqi leaders to treat Iraqi Christians – you know, it’s a community that’s lived here in Iraq since the time of the apostles – to treat them as a precious resource and not what he called an obstacle to be eliminated.

POGGIOLI: He said, and quote, “the age-old presence of Christians in this land and their contribution to the life of the nation constitute a rich heritage that they wish to continue to place at the service of all.”

KELLY: What kind of reception is he getting? You said people aren’t wearing masks. Are many people turning out, though, to greet him?

POGGIOLI: Well, look, on the road from the airport to the city, there were clusters of people. They were waving Iraqi and Vatican flags, but there were also long stretches with no one on the streets except heavily armed police. At the Cathedral of Our Lady of Salvation, however, the mood was jubilant.

POGGIOLI: Now, keep in mind that this is the church where there was a devastating massacre in 2010, in which some 50 people were killed. The pope recalled that attack in his speech to religious leaders, the priests and nuns who were there. And he again stressed the multi-confessional history of Iraq. And he had a very nice metaphor for this.

POGGIOLI: He said, here, I think of the familiar image of a carpet – that different churches present in Iraq, each with its age-old historical, liturgical and spiritual patrimony, are like so many individual colored threads that, woven together, make up a single, beautiful carpet.

KELLY: You’re in Baghdad now. Where else is he headed?

POGGIOLI: Tomorrow he goes to the holy city of Najaf, where he’ll have a really, truly historic encounter with one of the world’s top leaders of Shia Islam, the Grand Ayatollah Ali al-Sistani. And he rarely meets foreign visitors. You know, Francis has pursued interreligious dialogue with Muslims throughout his papacy, but this is the first time he’s going to meet a top Shiite leader.

Then on Sunday, he travels to northern Iraq, where most of the Christian communities live. That’s the area that was devastated by a brutal three-year rule of ISIS. And then later, he will celebrate mass in Erbil Stadium.

KELLY: And one question on timing, Sylvia. We mentioned COVID is bad right now in Iraq. You’re telling us about the crowds coming out to see him, crowds that are not socially distancing. What is the thinking behind why make this visit now?

POGGIOLI: That’s what a lot of reporters have been wondering. Francis says he’s wanted to visit Iraq for a long time, as did his predecessor, John Paul II. But that time, negotiations fell apart with Saddam Hussein. He really- cares very much about those he called Christians on the peripheries, not the so-called first-world European or North or South America. He wants to be close to them. And the visit is not aimed just at Christians in Iraq, but in the Middle East as a whole. So apparently, he even went against the advice of some of his people in the Vatican. He insisted on going. You know, he just might be an old man in a hurry.