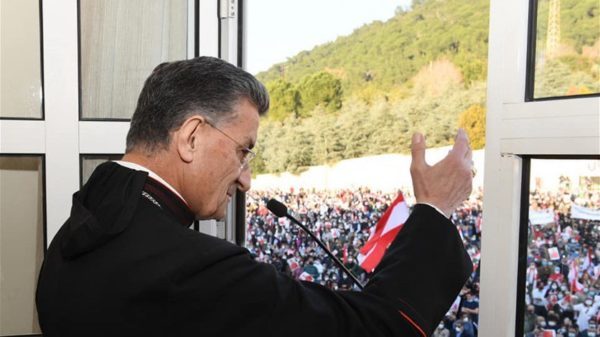 The Maronite League in Lebanon called on the Ministry of Foreign Affairs to summon the Iranian ambassador in Beirut over insults targeting Maronite Patriarch Beshara al-Rai by the Iranian Arabic-speaking Al-Alam channel.

The patriarch has been repeatedly calling for Lebanon’s political neutrality and the holding of an international conference under the auspices of the United Nations to save the country from its current crises.

In an article published on its website, the channel which is owned by the Iranian government accused Rai of seeking normalization with Israel. It threw offending accusations against the patriarch, saying that he was “motivated by right-wing groups known for their close ties with Israel.”

Lebanon’s Maronite League denounced the reports, describing them as “false accusations and fabrications.”

The League strongly condemned the article and asked Lebanese Foreign Minister in the caretaking government Charbel Wehbi “to summon the Iranian ambassador and inform him of Lebanon’s rejection of such positions.”

This comes in light of Hezbollah’s rejection of Rai’s proposals, without, however, closing the door to dialogue. The party’s deputy secretary-general, Naim Qassem, said in recent statements: “We do not wish to debate the Patriarch’s ideas and we are keen to ensure that the bilateral dialogue committee that exists between Hezbollah and the Maronite Patriarchate continues.”