Biden’s Middle East team is made up of familiar faces 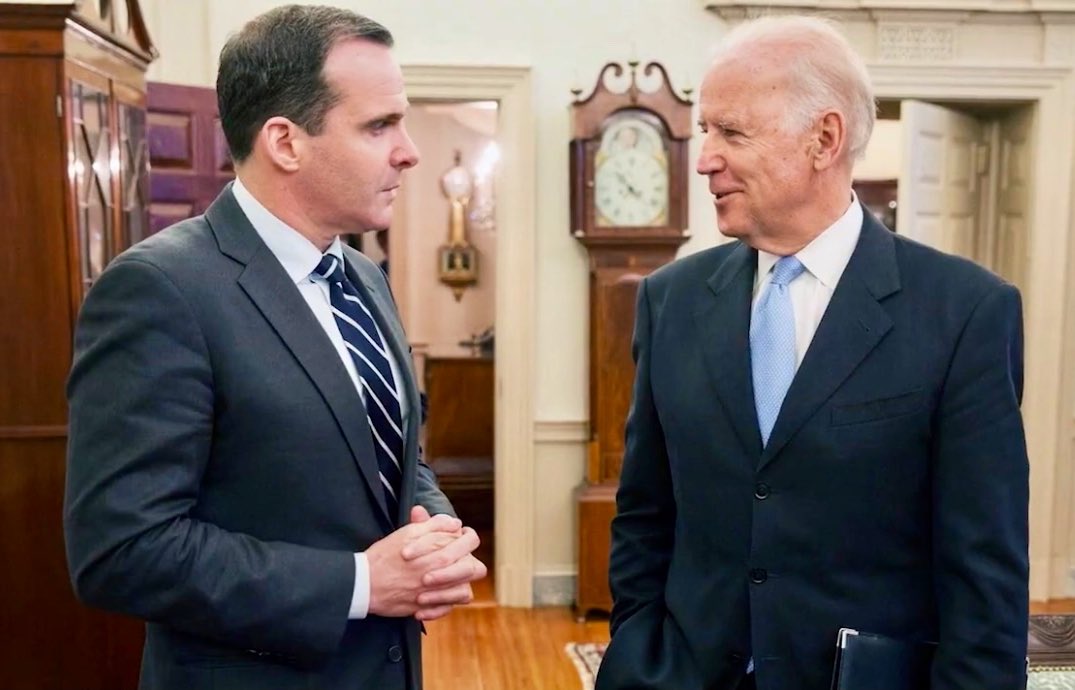 File photo : U.S. President Joe Biden with Brett McGurk, who served under Bush, Obama, and Trump, who is bringing aboard a Middle East team to the National Security Council that includes several former staffers from the U.S.-led campaign against the Islamic State.
Share:

Brett McGurk, who served under Bush, Obama, and Trump, is bringing aboard a Middle East team to the National Security Council that includes several former staffers from the U.S.-led campaign against the Islamic State.

This article is part of Foreign Policy’s ongoing coverage of U.S. President Joe Biden’s first 100 days in office, detailing key administration policies as they get drafted—and the people who will put them into practice.

President Joe Biden has begun staffing up his White House with experts to deal with renewed volatility in the Middle East, even as the administration looks to pivot Washington’s main focus to China and extricate the United States from costly ongoing wars that have dominated U.S. national security for two decades.

The new officials, including some who served under McGurk in his last role, will manage U.S. policy on some of the toughest crises around the world, even as the Biden administration looks to shift Washington’s focus to an era of so-called great-power competition with Beijing after nearly two decades of involvement in the Middle East. But the Middle East is likely to continue to suck up oxygen, especially as Biden’s team hustles to bring Iran back to the table for fresh nuclear negotiations and tries to broker peace in war-torn Yemen.

Joining the NSC will be State Department veterans Sam Parker as Iran director, Zehra Bell as director for Iraq and Syria, and Max Martin for Lebanon and Jordan. Josh Harris, a State Department official who served as deputy chief of mission at the U.S. Embassy in Libya, is joining the NSC to handle North African issues.

The Biden administration says it will work to resume U.S. aid to the Palestinian territories that was cut under Trump and help restore contact with the Palestinians’ diplomatic mission in Washington that Trump closed in 2018.

Meanwhile, career foreign service officer Evyenia Sidereas will take over as Arabian Peninsula director, and K.C. Evans is the new NSC director for political-military affairs and Yemen. Both could play important behind-the-scenes roles in U.S. efforts to broker peace talks in Yemen between the Saudi-backed government and Iran-backed Houthi rebels, led by U.S. envoy Tim Lenderking.

Parker and Bell both served under McGurk during his time as special presidential envoy to the Coalition to Defeat the Islamic State under Obama and Trump, a job he resigned from in 2018 after Trump abruptly announced a withdrawal of U.S. troops from Syria. Both Parker, a civil servant who previously served as NSC director for Syria and Iraq under Obama, and Bell, a career foreign service officer, are fluent Arabic speakers who have worked in the Middle East for years. Bell has recently been the Istanbul-based political chief for the U.S. government’s Syria Transition Assistance Response Team, which managed stabilization projects inside the country. Martin was an advisor to former U.S. Syria envoy Michael Ratney, whose team worked closely with McGurk.

Harris and Sidereas served in key roles on North Africa in the State Department during the Trump administration, when U.S. policy initiatives in the region were at times upended by surprise tweets from the president. Harris served as the top diplomat for Libya before Trump tapped Richard Norland as ambassador to the country in 2019.

Annie Rohrhoff has also been named as the director for counterterrorism for the NSC, according to people familiar with the matter.

The expected appointments follow a historical pattern of plucking NSC directors from other U.S. government agencies.

McGurk has also told potential political appointees that he does not have the budget to bring in more staff from outside government, according to sources familiar with the conversations. The NSC typically limits direct hires more than other parts of the U.S. government.

Horne, the NSC spokesperson, told Foreign Policy Biden is committed to bringing in more career government experts to work in the White House—part of a promise the president made to restore morale among government workers after the Trump era.

“President Biden has made rebuilding and supporting the national security workforce a key component of our foreign policy, and that includes recruiting outstanding career officials to serve in the White House,” she said. “We are proud to have recruited such talented career officials to serve as NSC directors as they bring a wealth of experience both in Washington and overseas in service to our country.”

“There’s a clear theme here which is [appointing] folks that have gone through the trial by fire during the Obama administration and managed to remain in place during the Trump administration,” said Nicholas Heras, a senior analyst at the Newlines Institute. “My gut tells me that McGurk is bringing a band together that can play a consistent tune when it comes to policy.”

Barbara Leaf, another former senior career diplomat, also joined the senior ranks of Biden’s NSC alongside McGurk. But Leaf is expected to only have a brief tenure on the NSC, however, as Biden is strongly considering nominating her to be the next top Middle East envoy at the State Department—the assistant secretary of state for Near Eastern affairs—people familiar with the matter said.

Other Biden appointees have already begun staffing up the State Department’s Middle East team in the meantime.

In an interim strategic guidance released this week, the Biden administration said the United States “should not, and will not” engage in “forever wars” and would reduce the American troop presence in the Middle East. But while Biden promises to be the third straight president to try to shift the focus of U.S. foreign policy out of the region, Middle East experts are also making their way into other parts of the administration.

Chris Maier, a career official who was ousted as the director of the task force to defeat the Islamic State at the Defense Department by Trump appointees last year, is currently filling the role of principal deputy assistant secretary of defense for special operations and low-intensity conflict. U.S. Ambassador to the United Nations Linda Thomas-Greenfield is also tapping Middle East experts to serve on her team, including Jeffrey Prescott, a former NSC director during the Obama administration, and Andrew Miller, the former NSC director for Egypt and Israel military issues.

Biden also named Robert Malley, formerly a lead negotiator on the Iran deal under Obama, as Iran envoy despite fierce pushback from Republicans on Capitol Hill, who see him as too soft on Iran and overly critical of Israel. Former diplomats have defended Malley from criticism, describing him as a capable and experienced expert on the region. Richard Nephew, who served as the top sanctions expert on the Obama-era State Department negotiating team for the 2015 nuclear deal, has joined the administration as Malley’s deputy.