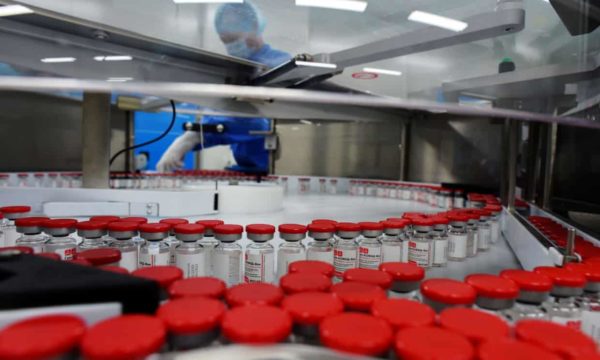 Israel has reportedly paid Russia $1.2m (£850,000) for its Sputnik V vaccine to be given to the Syrian regime . Russia mediated the secret deal in which an Israeli woman who crossed the border into Syria from the occupied Golan Heights was exchanged for two Syrian shepherds.

Israel secured coronavirus vaccines for the Syrian regime as part of a Russian-mediated prisoner swap agreed this week, according to an Israeli source and local media reports.

The source, who requested anonymity, did not state the number of vaccines, or whether they were from Israel’s own supply. Barak Ravid, an Israeli reporter, wrote on Twitter that the country had paid Russia $1.2m (£850,000) for its Sputnik V vaccine as part of the deal, citing “foreign sources”.

The prime minister, Benjamin Netanyahu, announced on Friday that a young Israeli woman who crossed the border into Syria was heading back to the country. In return, the Israeli government had returned two Syrian shepherds it had been holding, he said. It is not clear why the Israeli woman entered Syria.

The press in Israel had initially referred to another unspecified but apparently significant clause in the deal, adding that the country’s military censor had blocked publication. Under Israeli law, the agency can prevent reporting on topics it deems related to security issues.

The Times of Israel website said a “central aspect of the agreement” had been barred by the censor “despite the fact that the matter would be seen as deeply controversial to the Israeli public”.

However, once foreign media began reporting on the deal on Saturday, the Israeli military censor lifted the ban.

Amos Harel, a military and defence correspondent for Haaretz newspaper, wrote that Netanyahu would have preferred to have kept the deal secret, as the “Israeli right is not enthused by Israel spending its money to purchase vaccines for citizens of Arab countries”.

He added that the Syria vaccine deal could increase pressure on Netanyahu to use a similar method with the Hamas militant group in the Gaza Strip. The families of two Israeli soldiers whose bodies are held in the enclave have been calling for the government to use vaccines as a bargaining chip.

Some Israeli media suggested that Moscow, which is still inoculating its own population, had also asked for the clause to remain a secret. Syrian state media denied reports of a vaccine deal, calling them “fabricated information”.

Israel has secured more than enough vaccine shots for its nine million citizens, half of whom have received at least one shot. Syria has not yet begun vaccinating.

On Hebrew social media, speculation around a possible vaccine transfer this week had centred around a cryptic tweet from an Israeli politician.

Ahmad Tibi, who is from Israel’s Arab minority, was complaining that the government had not made greater efforts to help vaccinate Palestinians in the occupied West Bank and the blockaded Gaza Strip.

“Did I need to wait for a Jewish woman to cross into Gaza so that [Palestinians there] will be vaccinated?” Tibi wrote.

The tweet was widely interpreted as a comparison to the Israeli woman who entered Syria, and seen as suggesting Israel gave vaccines to Bashar al-Assad’s government in Damascus.

Elizabeth Tsurkov, a Syria analyst and research fellow at the Forum for Regional Thinking, said on Twitter that Tibi was indicating that Israel “gave Covid vaccines to the Assad regime as part of the exchange deal”.

She added: “Whatever vaccines were given to the regime, expect them to be distributed to cronies, warlords, members of the mukhabarat, high-ranking officers, not vulnerable groups such as the elderly or people with pre-existing conditions.”