‘America Is Back.’ Biden tries to turn the page on Trump 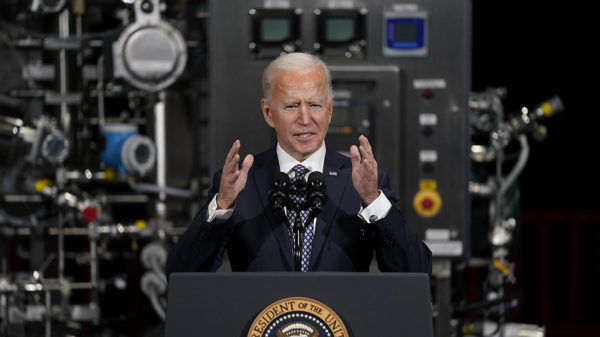 President Joe Biden began the week in Wisconsin, where he told voters that former President Donald Trump had occupied too much space in their heads during the last four years. He ended it with a trip to a COVID-19 vaccine manufacturing site in Michigan and a virtual appearance before the G7, telling his European allies that “America is back.”

That time, he didn’t mention his predecessor by name. He didn’t have to. With Trump’s second impeachment trial squarely in the rearview mirror, the 45th President was, for the first time in nearly six years, truly out of the spotlight. And the policies and actions Biden rolled out this week, both domestically and internationally, signaled a new era.

This week alone, the United States pivoted sharply away from Trump’s go-it-alone foreign policy posture, officially re-joining the Paris Climate Accords, announcing a willingness to resume discussions about returning to the 2015 Iran nuclear deal, and pledging a $4 billion contribution to a global COVID vaccine sharing initiative. At home, Biden pointedly made his first two trips to Wisconsin and Michigan—two states that narrowly helped deliver him the presidency—to sell his COVID relief package by speaking with voters and visiting a COVID vaccine production facility.

The moves were all repudiations of Trump. In Michigan and Wisconsin, he highlighted the nation’s progress in getting closer to defeating the pandemic after it ravaged the country during the final year of Trump’s presidency. But turning the page on Trump won’t be easy. If Biden telegraphed optimism about a new chapter in American politics, he also tried to temper expectations about how quickly he can bring about significant change.

“He’s trying to reset the moment and get things back to a more normal way of doing things,” says Julian Zelizer, a presidential historian at Princeton University. “He’s trying to reestablish what we expect from a President, but these are incredibly difficult times and he inherited a total mess, and this week all of that is playing out.”

As he attempts to move on from Trump, Biden must first tackle the biggest public health crisis in a generation. On Friday afternoon, Biden toured Pfizer’s 1,300 acre vaccine manufacturing site in Kalamazoo, Michigan. The purpose of the trip was twofold: to praise the workers working feverishly to produce the vaccine that will end the pandemic, but also to illuminate the intricacies of a complex and slow-moving process that has frustrated many Americans.

“I want the American people to understand the…extraordinary work that’s being done to undertake the most difficult operational challenge this nation has ever faced,” he said in remarks after his tour, standing in front of the stainless steel tanks used to make the vaccine.

The site is one of just three in the entire country that produces, packages and freezes the company’s COVID vaccine. Biden, double masked and joined by Pfizer CEO Albert Bourla and Michigan Governor Gretchen Whitmer, stood amidst rows of gray freezers, each of which can store up to 360,000 doses of the vaccine, and watched intently as four employees loaded trays of vaccines onto the freezers for shipment. He then observed the packaging process before delivering remarks where he advocated for his relief package, which would bolster vaccination funding, and praised Pfizer’s production process.

The trip accomplished its purpose. It emphasized the strides being made to combat the pandemic while educating Americans about the genuine impediments to widespread vaccine distribution. It was grounded in the science and the reality about the spread of the deadly illness that the Trump Administration often ignored. “This administration is going to be guided by science,” Biden vowed, “to save lives and to make lives better.”

But the challenges Biden faces were repeatedly laid bare during the course of the week. The trip itself was delayed by one day because of inclement weather, which in itself had set off a cascade of other crises in the nation, The weather had caused a disaster of epic proportions in Texas, turning off approximately half of the state’s electricity generating capacity, leaving millions without heat, and making the hypothetical dangers of climate change into a reality. And the White House said Friday it had delayed the distribution of six million doses of the vaccine, further upsetting the already tenuous rollout.

All of these incidents were reminders that, even as Biden receives high marks both at home and abroad— he was immediately welcomed into the fold by the European allies he spoke with on Friday, and polling consistently shows his COVID relief package is popular among two thirds of Americans— his success as president will still ultimately be judged by whether he can bring the country out of the pandemic and back into the condition on which he is hinging his presidency: normalcy.

On that score, he’s asking Americans not to judge him too soon. “I believe we’ll be approaching normalcy by the end of this year. And God willing, this Christmas will be different than the last,” he said Friday. But, he added, “I can’t make that commitment to you.”