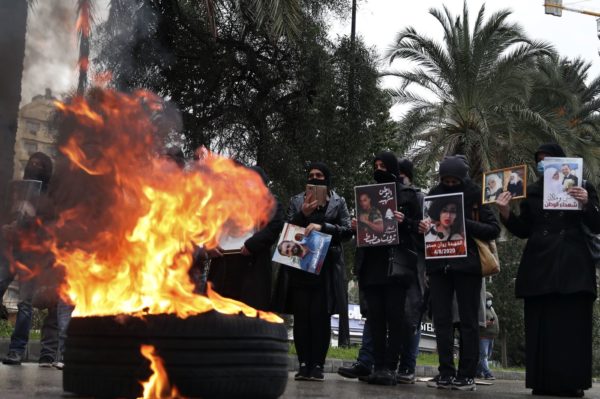 Relatives of victims of the Aug. 4, 2020 Beirut port explosion hold portraits of their loved one who killed during the explosion, as they burn tires to block a road during a sit-in outside the Justice Palace, in Beirut, Lebanon, Friday, Feb. 19, 2021. The prosecutor investigating last year’s massive blast in Beirut was formally notified Friday that he would no longer lead an enquiry into last year’s deadly port explosion, state-run Lebanon’s National News Agency reported. (AP Photo/Bilal Hussein)
Share:

The High Judicial Council named judge Tarek Bitar as the new Lebanese prosecutor to lead probe into Beirut blast , a day after his predecessor Judge Fadi Sawwan was removed following legal challenges by senior officials he had accused of negligence that led to the blast. The question will be whether he will be allowed to carry out his mission without interference or pressure.”

BEIRUT (AP) — Lebanon’s top judicial body on Friday named a new judge to lead the investigation into last year’s massive explosion at Beirut’s port, officials said, a day after his predecessor was removed following legal challenges by senior officials he had accused of negligence that led to the blast.

The High Judicial Council named judge Tarek Bitar as the new prosecutor after he was proposed for teh post by Minister of Justice Marie-Claude Najm, said the officials. They spoke on condition of anonymity because they were not authorized to speak to the media.

Despite the fast appointment of Bitar, who has been described by colleagues as respectable and having no political leanings, the removal of his predecessor by the country’s top court this week will likely further delay the investigation into the horrific explosion that killed 211 people, wounded over 6,000 and damaged large parts of Beirut.

Families of the victims and survivors of the Aug. 4 blast have accused the ruling political class of corruption and negligence that led to the explosion of ammonium nitrates, a highly explosive material used in fertilizers that had been improperly stored in the port for years.

“Tarek Bitar is a young judge who is competent and enjoys a good reputation,” tweeted lawyer Nizar Saghieh, who usually deals with anti-corruption cases. “The test will be whether he will be allowed to carry out his mission without interference or pressure.”

Earlier on Friday, families of the victims rallied near the justice ministry in Beirut, denouncing the removal of Judge Fadi Sawwan from the probe and calling it an “execution of justice” by a politicized judiciary.

The families of the victims read a statement, burned tires and said the new judge will have to read “thousands of papers” in order to get up to speed on what Sawwan had done over the past six months.

Sawwan’s removal came after legal challenges by senior officials he had accused of negligence that led to the blast, considered one of the largest non-nuclear explosions in history. Sawwan was formally notified earlier on Friday that he would no longer lead the probe.

The families’ spokesman Ibrahim Hoteit, whose brother Tharwat was killed by the blast, said the removal blew up “what remains of conscience and confidence between us and this rotten judiciary.”

The Beirut port explosion has been one of the most traumatic national experiences the Lebanese have faced and families of those killed are skeptical that any investigation into the explosion can be transparent and independent in a country where a culture of impunity has prevailed for decades.

Judge Sawwan had accused and summoned for questioning Lebanon’s caretaker prime minister and three former ministers on suspicion of negligence that led to the deadly explosion. Two of the former ministers challenged him in court in December, accusing him of violating legal and constitutional procedures and asking that he be recused, a challenge that brought the probe to a halt.

At the Beirut rally, the victims’ families also warned that in the future, they would resort to the street to pressure the judiciary to do its work, as well as politicians who refuse to show up for questioning.