The murder of Tripoli — and attempted murder of Lebanon 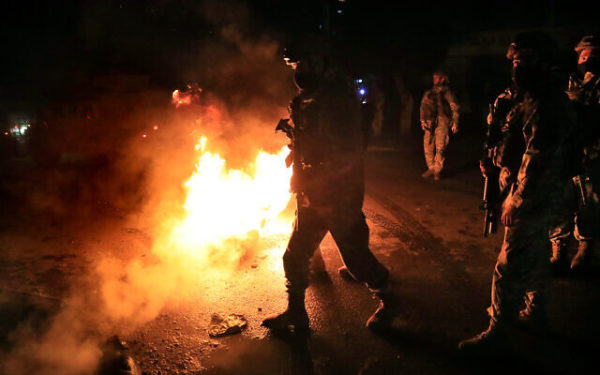 Lebanese citizens no longer have jobs to go to. Instead they attend funerals — for the victims of political assassinations, COVID-19 deaths, suicides, malnourished children, victims of state negligence, and those who simply lost the will to live.

With each passing day there is an inferno of new tragedies for a nation that would be flourishing if not for the corrupt criminals who have destroyed Lebanon in pursuit of their own interests, while an uncaring world scarcely pretends to pay attention.

I was shocked to the core by media reports from my home city of Tripoli about a man who offered his three-year-old daughter to the Red Cross because he lacked the financial means to keep her alive, before local benefactors stepped in to help his family. Then there was the footage of young men in floods of tears as they explained that they had emerged to protest because of their inability to feed their children. These painful guestures of humiliated desperation from Tripoli, a city that has been systematically marginalized for too many decades, were almost too painful to watch.

People in Tripoli today are starving — and I use this word in its literal sense. Many have gone an entire year without any stable source of income. Youth unemployment is nearly universal. Education, healthcare, welfare and municipal services are on their knees. Respectable families send their children out begging and selling products on the streets.

We can never condone violence, such as rioting and attacks on public and private buildings, but in Tripoli we have reached a point at which broken citizens feel they can manifest their anger only through such desperate measures. Hezbollah’s constellation of media outlets and mouthpieces exploited these acts to discredit the people of Tripoli, with disgusting accusations that protesters are associated with Daesh and other shadowy forces.

After the Beirut port explosion six months ago, Tripoli — at least temporarily — became Lebanon’s principal maritime entry point. However, as a result of endemic corruption, incompetence and inaction, there has been a failure to pump in the necessary infrastructural investment that would allow the city to properly fulfil this role.

There are suspicions that certain political forces actively blocked such investments, not wanting Tripoli to escape its chronic marginalization. For decades citizens were fed empty promises that nonexistent investments in the port would fuel an economic boom, but Tripoli’s own representatives failed the city at every turn.

Meanwhile there are accumulating indicators of Turkish ambitions to wield influence in Tripoli. Although this is nothing new, the latest round of Turkish attention follows the Beirut explosion, including high-level delegations and various Turkish NGOs stepping up their welfare activities. Opinions differ between those who predict a new age of Turkish hegemony for northern Lebanon, and skeptics who doubt the competence of Turkish diplomats to turn their ambitions into reality.

With the Gulf states walking away from their traditional role in supporting Lebanon, other regional powerbrokers can easily exploit this absence. “Nature abhors a vacuum. We will be there to fill it,” one Turkish diplomat boasted. A foothold in northern Lebanon would consolidate Turkish influence in Idlib and northern Syria, affording access to cities such as Homs and Hama. Turkey has also become extraordinarily active in the eastern Mediterranean, challenging Greek and Israeli maritime claims, along with fierce rivalry with Egypt.

Lebanese and Israeli intelligence warnings about Turkish security encroachments include one Beirut source claiming: “The Turks are sending an incredible amount of weapons into the north.” Mossad chief Yossi Cohen warned Arab intelligence chiefs: “Iranian power is fragile … but the real threat is from Turkey.” Interior Minister Mohammed Fahmi claimed last year that $4 million smuggled into Lebanon on a flight from Turkey had been intended to foment unrest. Media outlets cite certain political figures as being in the pay of Ankara, along with alleged Turkish support for pro-Muslim Brotherhood elements.

We can indisputably say that while Lebanese and Arab institutions continue to systematically abandon and marginalize Tripoli, they have only themselves to blame when predatory powers such as Turkey, Iran, China and Russia exploit this vacuum.

Meanwhile Lebanon is in mourning and shock over the assassination of Shiite publisher, journalist and activist Lokman Slim, an outspoken critic of Hezbollah. His murder is an appalling reminder of Hezbollah’s long, bloody trail of assassinations of national figures in the past two decades. Their objective is to intimidate all those who dare to speak with their consciences about how Lebanon is being held hostage to the whims of one faction and its allies. As Lokman’s sister Rasha lamented: “His enemies have lost a noble opponent who lived among them and debated with them intelligently, logically, calmly and lovingly.”

Lokman Slim, Gebran Tueni, Mohamad Chatah, Samir Kassir and other intellectuals were murdered with impunity because they stood up for justice and truth, killed by the death cult that is dragging our joyful, beautiful country into the darkness. The God worshipped by Lebanese Christians, Muslims and Druze alike is a God of love, peace and mercy — not vengeance, anger and death.

Who is their jihad against? Israel dominates Lebanon’s skies, while Iran’s proxies contaminate Lebanon’s culture, and both conspire to steal its soul. We want our country back. We will never be silenced, and when we die our children and grandchildren will fight and prevail against these evil, alien forces that desire to keep us in perpetual mourning.

For citizens of Tripoli and Lebanon, today it is not a question of fearing death: It’s instead a matter of whether death comes first from COVID-19, starvation, or the assassin’s bullet. For a nation dragged to these depths of humiliation, Hezbollah will soon discover that there can be no intimidation.