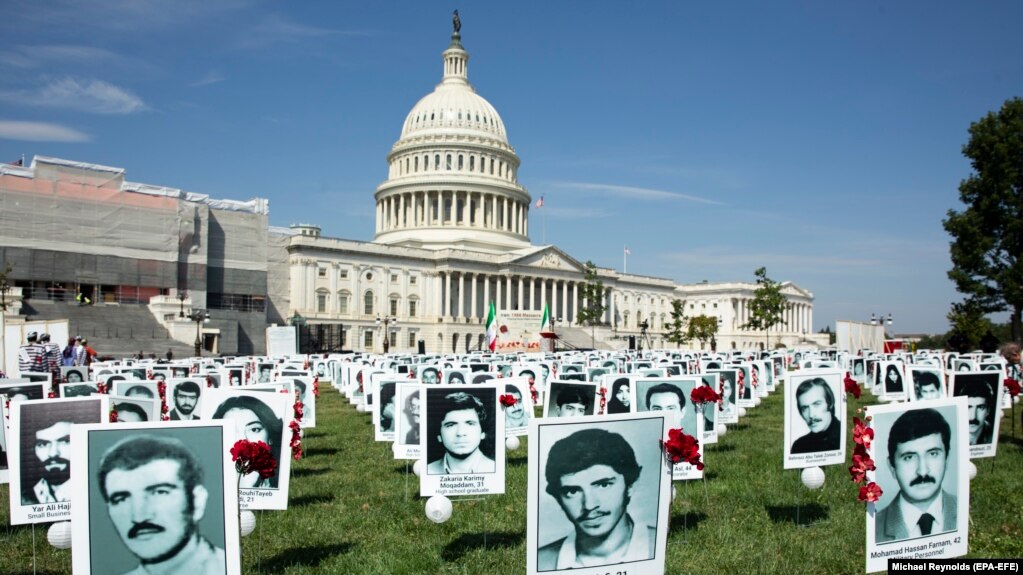 Activists opposing the government of Iran place the images of victims of state-sponsored executions of political prisoners in 1988 in Iran, on the East Front of the US Capitol in Washington, September 12, 2019
Share:

WASHINGTON – A group of Iranian dissidents has urged U.S. President Joe Biden to support their demands for secular democracy and respect for human rights in Iran, issues on which Biden’s administration has been silent early in its term as it focuses on curbing the Islamic Republic’s nuclear program.

In an open letter to Biden dated February 1, written in English and shared with VOA Persian, the 38 Iran-based activists wished him success following his January 20 inauguration and appealed to his administration to consider incorporating several of their political goals in its Iran policy.

Those goals include replacing Iran’s theocratic government with a secular democracy in a non-violent process involving a “free and fair” referendum; maintaining “maximum political, diplomatic and financial pressure” on the clerics ruling Iran until they are replaced; and pressing those Islamist rulers to respect human rights by releasing all political prisoners and prisoners of conscience in the country.

Those goals include replacing Iran’s theocratic government with a secular democracy in a non-violent process involving a “free and fair” referendum; maintaining “maximum political, diplomatic and financial pressure” on the clerics ruling Iran until they are replaced; and pressing those Islamist rulers to respect human rights by releasing all political prisoners and prisoners of conscience in the country.

“We sent this letter to the U.S. president because the U.S. is a democratic and powerful nation, while Iran is an important country because of its strategic location, resources and history,” said one of the signatories, Zartosht Ahmadi Ragheb, in a Monday video message to VOA Persian. “A dialogue and agreement between the two countries can benefit them and the world,” he added.

The State Department did not respond to a VOA request for comment on the Iranian dissidents’ letter. The issues of Iran’s poor human rights record and its Islamist ruling system also did not come up in Tuesday’s State Department press briefing, the first by spokesman Ned Price.

Secretary of State Antony Blinken similarly has not addressed the issues since being sworn in on January 26. When asked about Iran’s executions of people for homosexuality in his January 19 Senate confirmation hearing, Blinken denounced them as “egregious actions” but said the United States would be in a “much better position” to deal with such actions if it prioritizes preventing Iran from potentially developing a nuclear weapons capability in the near future.

Then-presidential candidate Biden promised in a September 2020 CNN op-ed to work on “calling out the (Iranian) regime for its ongoing violations of human rights … and wrongful detention of political prisoners.” Biden cited Tehran’s September 12 execution of Iranian wrestler and anti-government protester Navid Afkari for a murder confession that Afkari said was tortured out of him, and its imprisonment of Iranian human rights lawyer Nasrin Sotoudeh since 2018.

Iran’s cruel execution of Navid Afkari is a travesty. No country should arrest, torture, or execute peaceful protestors or activists.

Iran must free its other political prisoners, including Nasrin Sotoudeh, and release unjustly detained Americans. https://t.co/Jj9QZbyQL7

Biden called Afkari’s execution a “travesty” in a September 12 tweet. He tweeted two other times about Iran’s rights record since leaving office as vice president in 2017: expressing sympathy for Iranians killed in Tehran’s violent crackdown on nationwide anti-government protests in November 2019; and calling Iran a “bad actor that abuses human rights and supports terrorist activities throughout the region” in June 2019.

Biden’s predecessor Donald Trump was relatively more vocal about Iran’s poor rights record during his four years as president, tweeting about the issue 27 times including six times in Farsi, according to a VOA Persian review of the Trump Twitter Archive, an online resource cited by U.S. news outlets.

Trump won praise from some exiled Iranian rights and opposition activists for urging Iran to spare the lives of dissidents facing execution and for repeatedly calling on the nation’s Islamist rulers to stop killing anti-government protesters. Other exiled activists criticized Trump for not making an improvement in Iran’s rights record one of his demands for a proposed agreement to end objectionable Iranian behaviors.

The former president’s administration also pursued what it called a “maximum pressure” campaign of tightening U.S. sanctions aimed at forcing Iran to stop such behaviors, including its alleged pursuit of a nuclear weapons capability. Iran insists its nuclear program is peaceful.

The Iranian dissidents’ appeal for Biden to consider “maintaining maximum … pressure” on Iran echoed the language of the Trump administration, which began tightening sanctions in 2018 when it withdrew from a 2015 deal in which Iran agreed to curb nuclear activities in return for sanctions relief from world powers. Trump said the deal known as the Joint Comprehensive Plan of Action was not tough enough on Iran.

Biden has pledged to take a different approach, offering to revive diplomacy with Iran by returning to the JCPOA and easing nuclear-related U.S. sanctions if Tehran first agrees to resume strict compliance with the deal. Iran has been escalating its violations of JCPOA nuclear curbs since 2019 in retaliation for Trump’s 2018 pullout and has insisted that Biden make the first move toward renewed diplomacy by lifting all sanctions imposed by the former president.

Speaking at Tuesday’s press briefing, State Department spokesman Price expressed concern about recent reports of Iran making or planning further JCPOA violations that could shorten the time it would need to make a nuclear bomb. “This is a challenge we have to tackle immediately,” he said.

The Iranian dissidents who wrote to Biden include 11 of the 28 activists who signed 2019 letters urging the resignation of Iranian Supreme Leader Ayatollah Ali Khamenei and the replacement of Iran’s Islamist constitution with a democratic one. Most of the signatories of the 2019 letters were arrested for doing so.

At least 21 of the 38 signatories of the new letter to Biden have been arrested or imprisoned in Iran for peaceful political and social activism, according to the letter itself and to a VOA Persian review of names in the Iran Prison Atlas of U.S. advocacy group United for Iran.