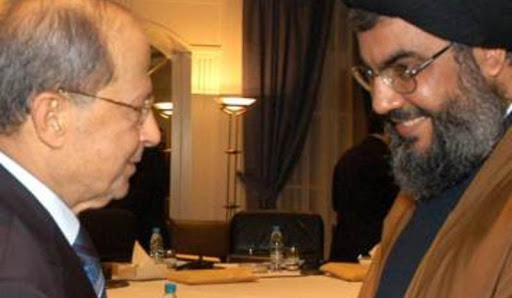 File photo: FPM founder and current Lebanese president Michel Aoun is shown with Hezbollah chief Hassan Nasrallah during the signing of the memorandum of understanding Feb6, 2006 . FPM admitted 15 years later that the agreement failed in building a state
Share:

“On the fifteen’s anniversary of the Mar Mikhael agreement signed between the FPM and Hezbollah , the political council of the FPM believes this understanding needs to be examined,” the FPM political council said in a statement.

On 6 February 2006, the Free Patriotic Movement which was headed at the time by its founder the current president of Lebanon Michel Aoun and the Iranian backed Hezbollah signed a memorandum of understanding in Mar Mikhael Church in Beirut. It established an alliance that according to analysts ” led to the collapse of the state of Lebanon and replaced it with the Hezbollah state” . Aoun was awarded the presidency and his son in law MP Gebran Bassil became FPM ‘s leader .

Former Hezbollah official Sheikh  Hassan Saeed Mishimish who served as the assistant to the first Hezbollah leader Sobhi Tufaili describes Hezbollah today as a terrorist organization that has assassinated and attempted to assassinate all the Lebanese leaders since 2004 . He also accuses it of being the most corrupt organization in Lebanon , that has robbed the state and its people and continues to protect all the corrupt Lebanese politicians , drug dealers and thieves . He says Hezbollah will never be able to liberate one square foot of Palestine but instead it has destroyed Lebanon and has made the Lebanese refugees looking for a country

According to analysts , the alliance gave Hezbollah the Christian political cover to launch a war against Israel that killed 1200 Lebanese mostly civilians and left over a million ( mostly Shiites) homeless , and gave Hezbollah complete control over Lebanon which resulted in the complete collapse of its economy . For the first time ever Lebanon had to default on its international loans and the currency lost 90 % of its value .