Sister of slain Hezbollah critic Lokman Slim: ‘I know who killed my brother’ 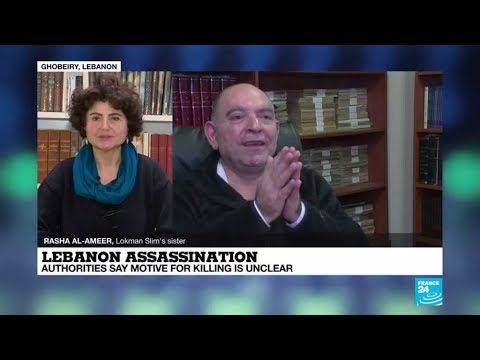 Rasha al-Ameer, the sister of slain anti-Hezbollah activist Lokman Slim, during an interview in Beirut following the assassination of there brother AFP
Share:

A silent pain reigns over the house of the family of Lokman Slim, an anti-Hezbollah activist, who was assassinated on Feb. 4.

At the entrance to the house, which is located in Beirut’s southern suburbs – Hezbollah’s stronghold – a lone policeman watches those visiting the grieving family.

Slim’s sister, Rasha al-Ameer, receives the mourners with the expression, “Lokman is alive,” with a smile on her face that disappears only when she sees someone dear to her slain brother crying; then, her eyes fill with tears, even for a moment.

“He is the brother, the friend, the teacher, and the example,” al-Ameer told Asharq Al-Awsat, adding: “No one can kill ideas, opinions and values. They killed my brother, so let them tell me how they will kill or erase his thoughts, actions and values.”

She says that Slim chose the more difficult road, the path of true freedom, away from slogans and bargains.

“My brother was killed because his words were painful to them, because he was frank, tough and did not compromise. They found him disturbing. They want to monopolize values and consider themselves the strongest, so how can my brother’s voice come out of their monopoly? They didn’t bear this.”

Al-Ameer doesn’t want to know the truth, and she is not expecting anything from the Lebanese judiciary, which she says is “in a coma”. She also does not want an international investigation, especially since it is also not always free from political interference, as she says.

She affirms that she will not resort to an international investigation – not only because it requires certain conditions and a mechanism that passes through the parliament – but because she knows well who killed her brother.

“I don’t care about the police details. What will the judiciary tell me? What kind of bullets were used to kill my brother? How did they stab him and he resisted? These are disgusting details that I don’t want to know… They will not ease the burden of my loss. I know the truth and this is enough,” she says.

As she speaks to Asharq Al-Awsat, al-Ameer repeats a verse from the Bible, when Jesus says: “Love your enemies, bless them that curse you, do good to them that hate you…”

But she adds: “It is too early to talk about forgiveness now, I cannot, but I always think about how a person can live with his enemies, I think deeply about this matter, how I can accept them after what they have done.”

“My brother worked a lot on how to reconcile the Lebanese after the civil war and the massacres they committed against each other. He worked on the so-called transitional justice that transcends those who killed whoever…” she recounts.

Al-Ameer did not like to comment on the reports that have spread recently about the reasons for Sim’s killing, including that he was working on a specific file related to Hezbollah and money laundering.

“These are fabrications ,” she says.