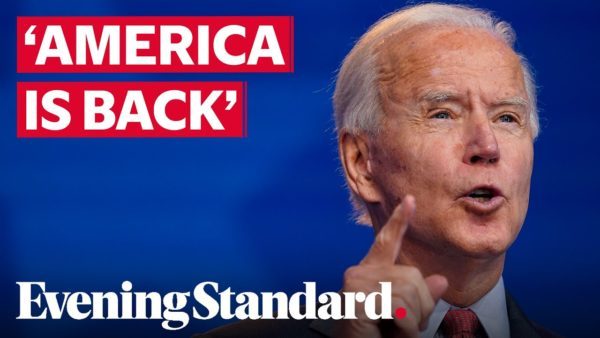 President Joe Biden had a simple response when asked whether his administration would lift sanctions on Iran to bring the country back to the negotiating table: “No.”

The president’s comments, which came during an interview with “CBS Evening News” anchor Nora O’Donnell, were part of a broader commentary on American foreign policy under the Biden administration.

Biden elaborated that Iran would need to stop enriching nuclear fissile material before the United States would rejoin negotiations with the country.

In 2015, the Obama administration negotiated a deal in which major European nations, Russia and China would lift economic sanctions on Iran in exchange for the country limiting its nuclear program. In 2018, then-President Donald Trump withdrew the United States from the deal, which he’d said was too lenient.

On Sunday, Iranian Supreme Leader Ayatollah Ali Khamenei the U.S. would need to lift sanctions before Iran meets its commitments under the nuclear deal.

On Friday, Secretary of State Antony Blinken met with several European signatories to the Iran deal, including France, Germany and the United Kingdom, to discuss steps moving forward for engagement with Iran. Top U.S. officials also convened a meeting to discuss the U.S. stance in the Middle East that same day.

“The Trump administration put Iran in a box,” Sen. Lindsey Graham, R-S.C., told O’Donnell during an interview Sunday. “I think Iran is weaker today than they’ve been since the regime was started about 40 years ago. So if I were President Biden, I would keep the sanctions on until Iran changed its behavior.”

Graham, a longtime Iran hawk and close Trump ally who once called Iranian leaders ‘religious Nazis,’ cautioned Biden that “because Trump did it doesn’t mean it’s wrong. So, I would slow down if I were President Biden and reevaluate some of these Trump policies and keep them in place if they make sense,” the senator contended.

During the CBS News interview, Biden also addressed the U.S.-China relationship, reflecting on his past experiences with Chinese President Xi Jinping.

“Well, we haven’t had occasion to talk to him yet,” Biden said of why he hadn’t spoken with the Chinese leader since his swearing-in. “There’s no reason not to call him. I probably spent more time with Xi Jinping, I’m told, than any world leader has, because I had 24, 25 hours of private meetings with him when I was vice president. Traveled 17,000 miles with him. I know him pretty well.”

Biden and Xi were both vice presidents of their respective countries in 2011 and 2013 when Biden visited China. Biden again engaged then-President Xi during a 2015 visit to Iowa.

U.S.-China relations, already on the decline when Biden and Xi met, have since deteriorated further after years of more aggressive posturing from the Trump administration and an emboldened China. Biden assured O’Donnell that there remained “a lot to talk about” with Xi, but was clear-eyed about competition with China.

“He’s very bright. He’s very tough. He doesn’t have – and I don’t mean it as a criticism, just the reality – he doesn’t have a democratic, small D, bone in his body,” Biden said of Xi.

“I’ve said to him all along, that we need to not have a conflict. But there’s going to be extreme competition. And I’m not going to do it the way that he knows. And that’s because he’s sending signals as well. I’m not going to do it the way Trump did. We’re going to focus on international rules of the road,” Biden said, signaling a return to a more multilateral approach that would see the U.S. work with other countries to counter and negotiate with China.

The rest of Biden’s interview with CBS News will air at 4:00 PM EST, one hour before the Super Bowl.