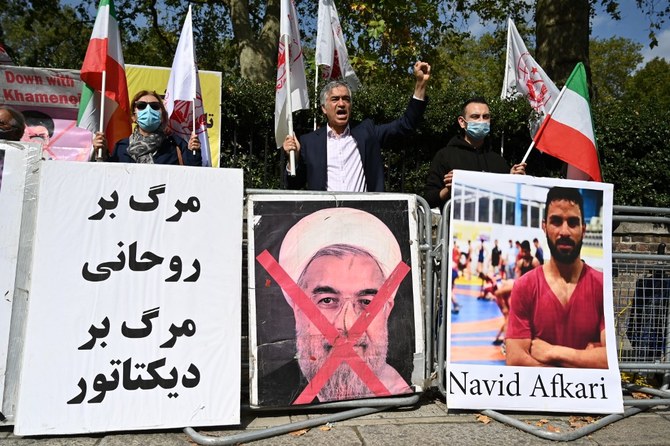 Protesters wave the Lion and Sun flag of the National Council of Resistance of Iran and the white flag of the People’s Mujahedin of Iran, two Iranian opposition groups, with a placard depicting the crossed out face of Iran’s President Hassan Rouhani as they demonstrate outside the Iranian embassy in London on September 12, 2020 against the execution of Iranian wrestler Navid Afkari in the southern Iranian city of Shiraz and against the Iranian government. – Iran said it executed wrestler Navid Afkari, 27, on September 12, 2020 at a prison in the southern city of Shiraz over the murder of a public sector worker during anti-government protests in August 2018. Reports published abroad say Afkari was condemned on the basis of confessions extracted under torture, prompting online campaigns of support for his release. (Photo by JUSTIN TALLIS / AFP)
Share:

When Joe Biden was running for president, Navid Afkari, the 27-year-old Iranian champion wrestler, was executed by the theocratic establishment. Biden tweeted at the time: “Iran’s cruel execution of Navid Afkari is a travesty. No country should arrest, torture, or execute peaceful protesters or activists. Iran must free its other political prisoners, including Nasrin Sotoudeh, and release unjustly detained Americans.” Biden also stressed in an opinion piece for CNN that he would work on “calling out the (Iranian) regime for its ongoing violations of human rights… and wrongful detention of political prisoners.”

Iran’s cruel execution of Navid Afkari is a travesty. No country should arrest, torture, or execute peaceful protestors or activists.

Iran must free its other political prisoners, including Nasrin Sotoudeh, and release unjustly detained Americans. https://t.co/Jj9QZbyQL7

However, he and his administration have remained silent in the wake of Iran’s more recent shocking human rights violations. The Tehran regime last month executed another champion wrestler, 30-year-old Mehdi Ali Hosseini, as well as champion boxer Ali Mutairi.

Mutairi, like the other athletes who were hanged, was tortured and forced to confess. Iran International reported that, according to human rights activists, he was “physically and mentally tortured in the detention center of an intelligence agency and, after being transferred to Sheiban Prison, he was severely harassed in solitary confinement by prison officials.”

It is at the discretion of the judiciary or the Islamic Revolutionary Court that many people are arrested on ambiguous charges, such as “spreading corruption on earth,” “waging war against God,” or “endangering the country’s national security.” Lack of due process, forced confessions and physical or psychological torture are prominent in the process through which the judiciary sentences defendants to the death penalty.

Many Iranians hope that the Biden administration will hold the Iranian leaders accountable for their heinous crimes. For example, after Biden won November’s presidential election, 38 activists based in Iran wrote an open letter to him, congratulating him and urging him to pressure the regime concerning its human rights violations. One way Biden could do this would be to maintain the US’ maximum economic and political pressure policies on the clerical regime.

The activists added: “As you may know, the Iranian people for a long time have been expressing their discontentment with the Islamic Republic government and their determination for a fundamental change. The nationwide protests in the winter of 2017-2018 and in November 2019 are the latest affirmation of the Iranians’ resolve in establishing a democratic rule of law.”

Biden must be cognizant of the fact that the situation has been dramatically altered in the last two years, as major and recurrent nationwide protests, which were first sparked in November 2019, have taken place. Widespread demonstrations erupted in the city of Ahvaz and then spread across the country, including to the capital, Tehran. The political nature of these protests are clear, as people have been heard calling for the regime to step aside. Iranians are frustrated with the regime’s financial and political corruption, human rights violations, religious dictatorship, widespread use of torture, the lack of the freedoms of speech, press and assembly, and the squandering of the nation’s wealth on sponsoring terror and militia groups across the region — including in Iraq, Lebanon, Yemen and Syria — as well as inciting anti-Americanism and anti-Semitism.

Iran has just executed a 3rd athlete – champion boxer Ali Mutairi – tortured and killed 6 days after the regime hanged its 2nd wrestler. U.S. @StateDept and European governments must speak up and pressure the IOC to kick Iran out of the 2021 Tokyo Games.https://t.co/sCCieGqmOK

Fearful of a revolution that may topple the theocratic establishment due to this rising discontentment, the Iranian authorities have increased their use of brute force, human rights violations and aggression against those who oppose them. The security forces have been attacking demonstrators and more than 1,500 men, women and children have been killed so far. Thousands more have been arrested and tortured.

Amnesty International last year documented some of the torture techniques employed by the Iranian regime against its critics. It stated: “The organization’s research found that victims were frequently hooded or blindfolded; punched, kicked and flogged; beaten with sticks, rubber hosepipes, knives, batons and cables; suspended or forced into holding painful stress positions for prolonged periods; deprived of sufficient food and potable water; placed in prolonged solitary confinement, sometimes for weeks or even months; and denied medical care for injuries sustained during the protests or as a result of torture.”

It is incumbent on the Biden administration and the UN to focus on Iran’s increased human rights violations rather than spend their political and financial capital on attempting to revive the Joint Comprehensive Plan of Action nuclear deal.