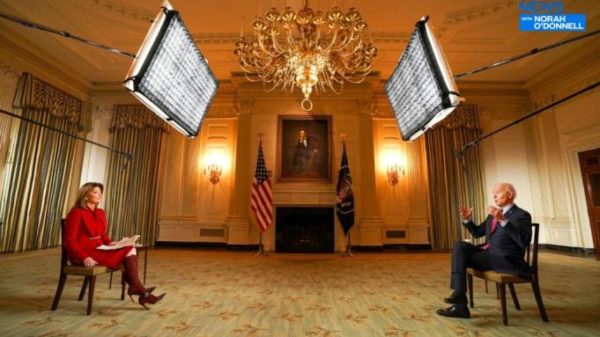 President Joe Biden said during interview on CBS that erratic Donald Trump should not receive intelligence briefings even though they typically have been given to previous former presidents.
Share:

President Joe Biden says that Donald Trump should not receive intelligence briefings even though they typically have been given to previous former presidents.

In his first sit-down interview with a network since becoming president, Biden told CBS Evening News anchor Norah O’Donnell that he doesn’t think Trump should receive the briefings his “erratic behavior unrelated to the insurrection,” referring to the Jan. 6 siege on the Capitol.

O’Donnell then asked him what was his “worst fear if [Trump] continues to get these intelligence briefings.”

“I’d rather not speculate out loud,” Biden said. “I just think that there is no need for him to have the– the intelligence briefings.  What value is giving him an intelligence briefing? What impact does he have at all, other than the fact he might slip and say something?

”An excerpt of O’Donnell’s interview with Biden aired on Friday evening’s broadcast. Other portions will air on Face the Nation on Sunday, and later that day at 4 PM in advance of the Super Bowl coverage.

Biden declined to say whether he thought that Trump should be convicted in a Senate impeachment trial, which is scheduled to start on Tuesday. Trump was impeached by the House for the second time last month on a charge that he incited the insurrection on the Capitol.

“I ran like hell to defeat him because I thought he was unfit to be president,” Biden said. “I’ve watched what everybody else watched, what happened when that– that crew invaded the United States Congress. But– I’m not in the Senate now. I’ll let the Senate make that decision.”

Biden also gave some more specifics on what he sees the threshold for the proposed $1,400 in direct payments as part of the next Covid-19 relief package. He said that “it’s somewhere between an individual making up to $75,000 and phasing out, and a couple making up to $150,000 and then phasing out.” But he said that the figures are open to negotiation.

He also said that he didn’t think that a proposal to raise the minimum wage to $15 an hour would be part of the package, after the Senate passed a resolution by voice vote to hold off on such a move during the pandemic.