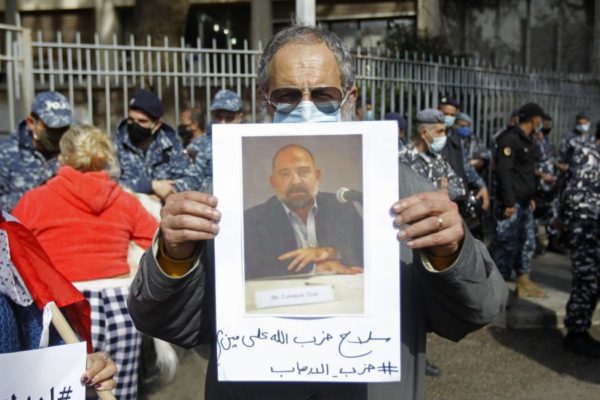 A protester carries a poster of the Lebanese activist and Hezbollah critic of Iran-backed Hezbollah Lokman Slim with Arabic words on the poster that read, “Hezbollah’s arms against who? Weapons of terrorism” during a protest in Beirut, Lebanon on Thursday. Photo by Wael Hamzeh/EPA-EFE
Share:

BEIRUT, Lebanon,– This week’s slaying of an anti-Hezbollah Shiite political activist in southern Lebanon and recent violent unrest in the northern city of Tripoli have increased fears the country is slipping into “security chaos” and facing an Iraq-style wave of silencing peaceful activists.

“All the signs indicate that Lebanon has actually reached the level of security chaos…We are already there,” Riad Kahwaji, a Dubai-based Middle East security and defense analyst who heads the Institute for Near East and Gulf Military Analysis, told UPI.

Kahwaji cited poverty and unemployment, which are “on the rise dramatically,” and growing crime and theft rates while “state authority is almost non-existent and citizens do not trust all of the state agencies.”

The most alarming development was the assassination of Lokman Slim, a 58-year-old researcher and staunch critic of Iran-backed Hezbollah, who was found shot with four bullets in his head on Thursday in his rented car near the town of Addousiyeh in southern Lebanon, a bastion of the heavily armed Shiite militant group.

Slim, who was one of the most outspoken Shiite voices opposing Hezbollah’s grip on the country and its intimidation tactics, actively participated in the anti-government protests that started in October 2019. Months later, Slim blamed Hezbollah and its allies for death threats he received.

His sister Rasha al Ameer told the media Thursday that a group of young men had plastered placards at the time reading “glory to gun silencer” on the wall of Slim’s house in the Haret Hreik neighborhood in Beirut’s southern suburbs, a Hezbollah stronghold.

“Those who committed the crime are known…It is clear who controls this area,” al Ameer said, without naming any group.

Accusations quickly pointed to Hezbollah, which later in the day issued a statement condemning Slim’s killing and calling on the judicial and security authorities to quickly expose and punish the culprits.

Slim’s family, like many, don’t trust the judiciary as all investigations in similar assassinations have led nowhere.

“There have been many such assassinations and we reached no results because the judiciary has no free hand,” Marwan Charbel, a retired brigadier-general and former interior minister, told UPI. “Even if a judge reaches a conclusion he won’t say who is the culprit as he is not protected and supported” by the political authority.

Charbel said the security services were carrying out their duties “as much as they can” but the assassinations of 12 top politicians, security officials and journalists from 2005 to 2014 “were meticulously well planned and well covered, leaving no trace on the ground.”

The only exemption was the case of Prime Minister Rafik Hariri, who was killed in a massive explosion targeting his convoy on Feb. 14, 2005. A Netherlands-based international tribunal, which was formed to investigate Hariri’s killing, found a Hezbollah member guilty; a verdict rejected by the Iran-backed group.

“We are in a situation very similar to Iraq, where the de facto forces are imposing themselves on the country…it is the same party imposing itself on Lebanon,” Kahwaji said. “Those forces are trying to silence anyone, especially the intellectuals who belong to the same confession [Shiites]. No one is allowed to speak.”

Dozens of activists have been killed in Iraq in recent years, and many others were kidnapped, assaulted or threatened.

Like in Iraq, Lebanese — especially Shiite — activists, researchers and journalists have been accused of links to Western embassies or intelligence services, with Hezbollah chief Hassan Nasrallah naming them “the Shiites of the Embassy.”

Amin Kammourieh, a journalist and an independent political analyst, wondered whether Hezbollah was “that stupid” to assassinate Slim “so easily” in an area under its complete control.

“If it wasn’t Hezbollah, so who succeeded in infiltrating Hezbollah and carried out the assassination?…This is worse,” Kammourieh told UPI, blaming the group for “a climate of hatred that makes killing easy and justified.”

He, however, raised the possibility of “a party” trying to exploit Slim’s killing “to exert more pressures” on Hezbollah.

Slim’s assassination occurred a week after violent unrest engulfed the city of Tripoli in northern Lebanon and the Army announcement on Monday of the arrest of 18 Lebanese and Syrians with links to Islamic State in the eastern town of Arsal on the border with Syria.

Defying a three-week coronavirus lockdown, residents in Tripoli, one of the country’s poorest areas, took to the streets to peacefully protest severe measures imposed by the caretaker government to contain a surge in death rates and COVID-19 infections.

Soon the protests turned violent and rioters, who attacked government buildings and set on fire the historic municipality building, clashed with the police forces. One protester was killed and 250, including soldiers and police, were wounded. Scores were detained to investigate who instigated the riots.

“Tripoli is the most vulnerable area and the poorest. Protests always start there,” said Mona Fayad, a political activist, politologist and professor in psychology at the Lebanese University. “Because they are extremely poor and most of them unemployed, many of them could be easily exploited by many parties and services to turn any peaceful protest into violence.”

Fayad said the message is clear: If you go to the streets, you will be met with violence and rioters will be unleashed to destroy your areas.

“Under this equation, I don’t know if their plan will work and people will keep silent or go to the streets and foil their attempts,” she told UPI.

Kammourieh said exploiting the “sufferings of the poor” for political purposes is probable but the “worst is this combination of security chaos, social explosion and coronavirus spread.”

What Charbel fears most is “a big political assassination,” targeting a political leader or a party leader that would lead to a sectarian strife.

“Lebanon is like a car moving fast without brakes,” he said.