How Lebanon’s poor are pawns in Hezbollah’s game 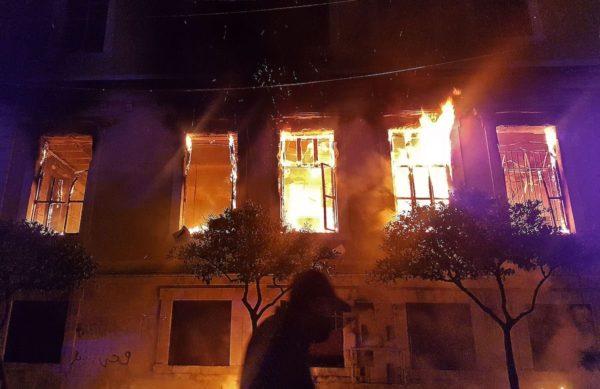 Fire engulfs the interior of the municipality building, in the impoverished northern Lebanese port city of Tripoli [FATHI AL-MASRI/AFP via Getty Images]
Share:

Lebanon’s capital of the north is burning. Tripoli has witnessed violent riots in the last few days. The city that was previously a cultural and trade hub has been suffering from poverty and neglect by the central government for decades. The irony is that Tripoli is the home of some of Lebanon’s richest politicians. However, these politicians, who have done well for themselves and become billionaires, have done nothing to lift the city out of poverty. Tripoli is one of the poorest cities in the Middle East, with 80 percent of the population living on less than $2 a day.

The city that was already struggling with poverty was also hit hard by the coronavirus disease and those who were hardly able to make ends meet were devastated by lockdown. Those who live from day to day — taxi drivers, porters, street sellers and the like — found themselves without any income. Similar to all the government’s promises, the offer of support was never fulfilled.

Youngsters went all over the city; they were angry and hungry. Last week’s protests led to riots, resulting in 226 being wounded and one killed. However, the riots were expected. More than a year ago, a member of the Tripoli municipality complained to me about the deteriorating situation in the city and the north in general. He told me that people in poor areas surrounding the city, particularly Bab Al-Tabbaneh, threatened him and his colleagues that they would raid the city and take whatever they could if the government did not provide them with minimal relief.

The riots did not happen as spontaneously as expected. They were, of course, fueled by the starving population. Nevertheless, outside forces contributed by steering the violence for political purposes. A contact in Tripoli told me of rioters who carried with them hundreds of sticks of fireworks and Molotov cocktails. How can someone who can’t afford to buy a loaf of bread afford such weapons? Another contact told me that he and his peers went to the protests but, when they noticed the violence organized by some elements, they immediately left.

The rioters were working according to a plan. They created a diversion by enticing the troops who were protecting the Serail, the headquarters of the Governorate of North Lebanon, to follow them, while some members stayed behind to burn the municipality building. The question is who has an interest in the spiraling violence? Prime Minister-designate Saad Hariri issued a statement directly blaming the army, who in his view “stood watching” while the rioters set the building on fire. Hariri used the violence to highlight President Michel Aoun’s incompetence in running the country. Hariri and Aoun have been bickering for months over the formation of a new government, with the president insisting on a quota to preserve the influence of his son-in-law Gebran Bassil and his main ally Hezbollah.

Al-Akhbar, the pro-Hezbollah newspaper, accused “foreign embassies” of provoking the riots. It claimed that, two weeks ago, a delegation of representatives of several Western embassies warned the authorities that the situation was getting worse because of the failure to form a government, that protests were expected, and that the security apparatus should not repress them. It also described the riots as part of an overall desire to spread violence to other areas of Lebanon and to turn the country against Hezbollah and the “resistance axis,” describing the protesters as an “army of mercenaries” mushrooming under the cover of “civil society.” Another Aoun-Hezbollah supporter, the television producer Charbel Khalil, used Twitter to claim that the revolution had been stolen by Daesh. He posted photos of former Daesh fighters, saying “continue with your stupid paid revolution and this is what you will be seeing in Tripoli,” using the hashtag “A revolution stolen by thugs.”

When I asked my contact in Tripoli, he told me that many of the rioters were identified as people from the city, Jabal Mohsen and other poor areas in the north that are affiliated with Saraya Al-Muqawama, which is part of the Hezbollah security apparatus. Hezbollah has been aggressively recruiting in Sunni areas in Lebanon and in Palestinian refugee camps. Taking advantage of people’s poverty and disfranchisement, Hezbollah has been able to build an army of Sunni mercenaries that it can unleash whenever it is convenient.

Hezbollah leader Hassan Nasrallah has skillfully used Sunni extremism to legitimize his activities. He started to use this tool when he first ventured into Syria. When he started to send fighters across the Syrian border, he could not say that he was sending young men to support a criminal dictator, whose brutality — as well as that of his father — had taken its toll on Lebanon for 30 years. Instead, he gave the lame pretext that the fighters were going to protect the tomb of Zainab, the granddaughter of Prophet Muhammad. Every now and then, Nasrallah gave another lame excuse. The emergence of Daesh was a gift for Hezbollah, as it offered the group a valid excuse to justify its intervention in Syria. Since then, Hezbollah has been using the “Sunni terrorism” narrative to give itself legitimacy.

Today, unfortunately, Tripoli — the area of Lebanon that needs help the most — is being scapegoated as different parties try to roll out their political agendas. But the riots mostly serve the objectives of Hezbollah, which has been against the October 2019 revolution since day one.

Dr. Dania Koleilat Khatib is a specialist in US-Arab relations with a focus on lobbying. She is co-founder of the Research Center for Cooperation and Peace Building, a Lebanese NGO focused on Track II. She is also an affiliate scholar with the Issam Fares Institute for Public Policy and International Affairs at the American University of Beirut.