The inside story of how Alexey Navalny uncovered Putin’s $1.3 billion palace 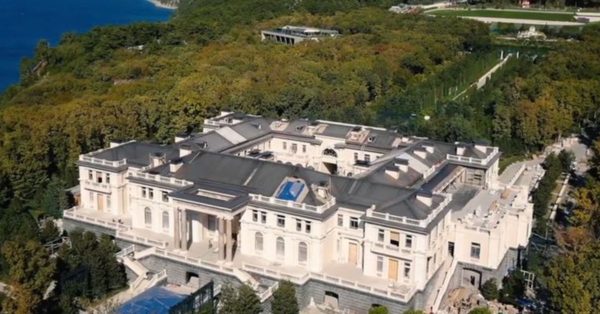 The $1.3 billion Residence at Cape Idokopas , also known as “Putin’s Palace” and the Palace in Gelendzhik is an Italianate palace complex located on the Black Sea coast near Gelendzhik, Krasnodar Krai, Russia. Whistleblower Sergei Kolesnikov and the Anti-Corruption Foundation (FBK), led by Alexei Navalny, claimed the palace was built for President Vladimir Putin.
Share:

Two days after Alexey Navalny, head of Russia’s Anti-Corruption Foundation (FBK) was arrested on his return to Moscow from Berlin, he released a video expose that shocked Russians and people around the world. In the video, “Putin’s palace. History of the world’s largest bribe,” Navalny alleged that an opulent property near Gelendzhik, a town in the southern Russian region of Krasnodar, was constructed for Russian President Vladimir Putin with illicit funds of $1.35 billion, provided by members of his inner circle, and that Putin is the real owner of the palace.

The palace’s features apparently include a port, a vineyard, a church, a casino, an underground hockey rink, and toilet brushes costing $850 a piece. “It is a separate state within Russia… And in this state there is a single, irreplaceable tsar. Putin,” Navalny said in the video. Allegedly covering an area of 17, 691 square meters, it is the largest private residential building in Russia. Putin denied the claims. “Nothing listed there has ever belonged to me or my close relatives,” he said Tuesday.

Within 24 hours of its release to YouTube, the video reached 20 million views and within a week, 93 million, making it the activist’s most popular investigation. After Navalny’s arrest pushed thousands of people to protest in more than 100 cities across Russia on Saturday, demonstrators waved toilet brushes in the air. Police detained 3,711 people over the weekend, according to Moscow-based NGO OVD-Info, sparking international condemnation. TIME looked into how the investigation unfolded:

How did the investigation originate?

The idea to look into the Gelendzhik property came to Navalny a few days after he woke up from a coma in Berlin in early September, Maria Pevchikh, head of the investigations department at FBK tells TIME over the phone from her home in London on Monday. Pevchikh and FBK investigator Georgy Alburov began their research a few weeks later, while Navalny dug out leads as he was recovering in intensive care and wrote the video’s script. “I can’t say we started from scratch,” says Pevchikh. She and Alburov have been uncovering dozens of corruption scandals with FBK for over a decade. They knew where to look. “So many stories have somehow overlapped in terms of how Putin manages his corruption,” she says.

Putin-insider-turned-whistleblower, Sergei Kolesnikov, also laid some of the foundations for the investigation. Kolesnikov said he was responsible for building the property from 2005. Originally conceived as a “small house”, it started morphing into a “huge palace,” Kolesnikov tells Navalny in the video. Kolesnikov fled from Russia after publishing in 2010 an open letter calling on then-President Dmitry Medvedev to end Putin’s corruption, wherein he divulged how the palace came to be. “The debilitating corruption and greed plague millions of Russians,” he wrote. In the decade since, there have been no large-scale leaks about the residence.

But in the past few years, FBK had received snippets of leaked information about the palace, such as photos and a floorplan. Pevchikh says the documents came from a few of the thousand workers involved in constructing extensions to the palace, despite the fact that their phones were banned on site. “I think those who were building the palace passed the threshold for being able to contain the information,” she says.

How did Navalny’s team film the palace?

This was one of the most challenging tasks, Pevchikh says. The team decided to travel to Gelendzhik to capture a video of the heavily-guarded residence using a drone. Three FBK staff members, Alburov, Vyacheslav Gimadi, and Vladlen Los, took a train at night from the capital. Before Alburov and Gimadi disembarked near Gelendzhik, Los replaced their phones with burners and took the devices on to the Black Sea city of Sochi. That way, if the police or the FSB, Russia’s security service, were monitoring the team’s geolocation they would be directed some 240km away from the estate. “We know we’re under constant surveillance,” says Pevchikh.

The particularly high hostility toward FBK in the Krasnodar region made the cover up more urgent. “Whenever we go there we get into some kind of trouble,” Pevchikh says. Navalny and several FBK members were attacked by residents outside Anapa airport in Krasnodar in 2016.

Unable to get near the palace on land due to the high level of security, FBK travelled by boat to the Black Sea Coast. Ahead of their trip, the investigators contacted the FSB for permission to sail in the region—a particular requirement for this area only, said Navalny—and were asked (without justification) to maintain a 1-mile radius from the coast around the estate.

The FBK investigators and a cameraman rode in a motor-powered dinghy boat on a clear, sunny day wearing bright orange life jackets. Alburov and Gimadi seemed appropriately dressed for their seaside escapade, donning shorts and fish and floral print short-sleeved shirts. “We’re in a slightly unusual situation for us,” Alburov said in the video, as the boat bobbed. They stopped two miles from the residence, from where they tried to fly the drone. Four attempts later, they got the detailed footage they were after.

As for the palace’s interior, FBK produced visuals based on descriptions and photos from workers at the residence. Using architectural plans that listed Italian furniture brands, they inquired with the manufacturer about the appearance and cost of the products. “Each couch was the cost of a small flat on the outskirts of Moscow, and if you took all the furniture from the reading room you could buy a decent flat in London,” says Pevchikh.

It’s not clear how often Putin frequents the residence. According to FBK, all but essential staff are dismissed when he visits. Several sources told FBK that Putin takes “select” guests including world leaders to the palace for the “real fun”, after meetings in his official residence in Sochi, which the independent investigative news site Proekt has confirmed, says Pevchikh.

Who financed the palace?

By analysing more than 100,000 bank transactions, Pevchikh and Alburov say they uncovered a complex web of transfers and shell companies that facilitates the flow of money needed to sustain the palace and its vineyards. They include the state-owned pipeline monopoly Transneft, oil giant Rosneft and its Chief Executive Igor Sechin, and Gennady Timchenko, Putin’s business partner from the 1990s. Much of this money comes from rental agreements between state companies and two companies that own the palace and the vineyard respectively, FBK claims.

Navalny says that Transneft paid 4.3 billion rubles ($56.7 million) in ‘rent’ and to legitimize monthly payments of 120 million rubles ($1.6 million), and that Transeft president Nikolai Tokarev visits the area annually to deliver speeches and pose for photos.

“That is why we call it the world’s biggest bribe. Putin’s friends, who got the right from him to steal whatever they wanted in Russia, thanked him a lot. But they also chipped in, and collected 100 billion rubles and built a palace for their boss with this money,” Navalny wrote in the written version of the investigation.

Dozens of investigators said that a defining feature of Putin’s 21 years’ in power is his tacit contract with the oligarchs, the wealthiest Russians: keep out of politics, and you can keep most of your money. The FBK and others claim that Putin and other Kremlin officials have been taking a cut from businesses. Anders Aslund, a Swedish economist, estimates Putin’s net worth is between $100 billion and $160 billion, which could make him the third richest man in the world after Jeff Bezos and Elon Musk.

Who owns the palace?

According to Navalny’s video the palace is officially registered to Binom Joint Stock Company, a tiny firm based in a 100 square foot office in St. Petersburg.

Navalny said Binom’s employees are also employed by an obscure company, Aktsept, which is owned by Mikhail Shelomov, Putin’s cousin once removed (Putin and Shelomov’s grandparents were brother and sister). The link to a family member was significant, Pevchikh said, pointing out that Putin has transferred his palace’s management from individuals associated with the Kremlin to his own flesh and blood.

Through Aktsept, Shelomov owns 0.2 percent of Gazprom, worth more than 8 billion rubles ($108.6 million) and the annual dividends alone bring in more than 560 million rubles ($7.6 million), according to the investigation. Despite apparently becoming one of Russia’s richest people, Shelomov kept his day job at Sovcomflot, the country’s largest shipping company, and continued to live relatively modestly in a townhouse in St. Petersburg. This is because the wealth in his name really belongs to Putin, claims FBK — “he is just a nominee”, says Pevchikh.

On Jan.19, Kremlin spokesperson Dmitry Peskov said the allegations in the video were not new, and also false. “We explained many years ago that Putin does not have any palace in Gelendzhik,” he said.

What’s next for FBK?

Navalny faces three and half years in prison at his next hearing on Feb. 2 on charges of violating the terms of a suspended sentence from a 2014 embezzlement case that he said was “politically motivated”. Alburov and several FBK members, including press secretary Kira Yarmysh, were arrested in Moscow on Jan. 21, accused of inciting participation in Saturday’s protests. Police arrested Los, a Belarusian citizen, the same day and drove him to the Belarus border with a sack on his head, says Pevchikh. He is barred from re-entering Russia until November 2023.

Meanwhile, Pevchikh is planning the next corruption probe. “The palace investigation was just the start. We cracked the code, we figured out how they pay for things and where they get money from. We already know where to dig further,” she says.

With the authorities’ crackdown on FBK, she is well aware of the risks she faces. But she says it won’t stop her investigative work or plans to return to Russia. “That is exactly what the authorities want. Fear,” she says, “And I am not gifting it to them.”