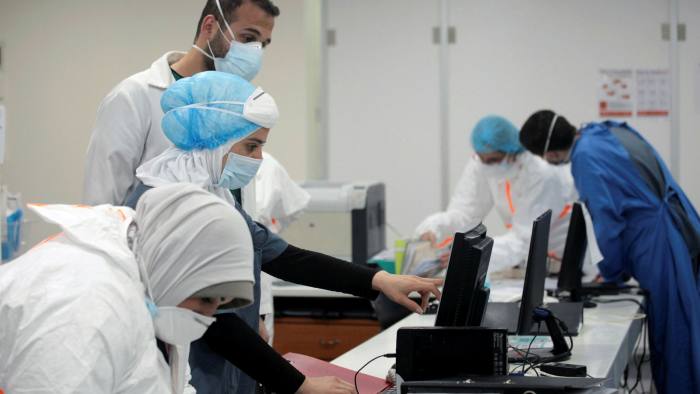 Medical staff in an intensive care unit for coronavirus patients at Rafik Hariri University Hospital in Beirut. In January 2021 alone, Lebanon recorded 1,627 deaths related to COVID-19. This is more than the total number of deaths—1,455—recorded in 2020, according to Lebanon’s Ministry of Health.
Share:

At dawn on Sunday, the moment that intensive care director Georges Juvelekian was dreading finally arrived. His hospital ran out of breathing support devices called BiPaps. It fell to his colleague to choose which of two patients to treat with one available machine.

As Saint George Hospital’s ethics committee chair, Dr Juvelekian had drawn up a protocol eight months ago on “how to allocate scarce resources”. Back then, Lebanon’s coronavirus outbreak was contained — he expected the policy to gather dust. But now, for the first time, one of Lebanon’s three largest university hospitals did not have the equipment it needed to help keep someone alive.

With everything from equipment to medicine in short supply, Lebanon’s medics say they are on the edge of “the Italy scenario” — making life or death decisions about who should receive scarce medical resources as coronavirus cases surge after the Christmas holidays.

More than 1,000 people have died of Covid-19 in Lebanon in January. A total of 2,477 people in Lebanon have lost their lives to the virus since the pandemic began. The government has launched a 24-hour curfew. With a few exemptions, people are forbidden from leaving their home, relying on supermarket deliveries. “We’re a low-resource country right now,” said Dr Juvelekian. “It’s the whole system that’s on the brink of breaking.”

While many countries have grappled with hospital bed shortages and the need to prioritise care, Lebanon’s response has been hobbled by the more than year-long financial crisis and the blast at Beirut port, which devastated the city, partly destroying four hospitals, including Saint George.

Lebanon remains in the hands of a caretaker administration as its political leaders have failed to appoint a new government after the previous one resigned after the August 4 blast.

Political stalemate and government inaction have made the World Bank, which last week allocated its first loan for vaccine purchase to Lebanon, uncharacteristically blunt. “Our sense is that the country is falling apart,” said Saroj Kumar Jha, regional director. He described the economic crisis, rooted in years of state mismanagement and alleged political corruption, as “self-inflicted”.

Two weeks into a strict lockdown, inconsistently enforced, Lebanon’s intensive care units are 94 per cent full, according to Firass Abiad, manager of Rafik Hariri University Hospital, Lebanon’s biggest public hospital. The entire country is affected: Dr Wael Harb, deputy medical director for a Médecins Sans Frontières-run Covid-19 specialist unit in the Bekaa Valley, an hour from Beirut, said he was receiving calls from the capital “for ICU beds, which we don’t have”.

With so many patients, intensive care specialists in Saint George last week ran out of outlets that supply oxygen and had to resort to cylinders. “We were hooking people on oxygen in their cars. That’s how bad it was. We had critical patients sitting in chairs,” recalled Dr Juvelekian in his office. Families of Covid-19 victims are desperately searching for hospital spaces, “calling around to figure out where they know people . . . whether the hospital would accept them”, said Mazen el Sayed, director of clinical operations at the American University of Beirut Medical Center (AUBMC)’s emergency department.

At AUBMC, “we had to treat patients in the hallways [and] . . . in the [emergency department] entrance”, said Dr Sayed. It is retraining staff to boost its intensive care team. “But honestly . . . it’s not enough,” he added. Many are caring for relatives at home, stoking a black market in ventilators — with second-hand ones as much as $7,500 online — and other equipment.

Patients admitted to hectic emergency wards alone face the prospect of dying far from family, said Toufic Chaaban, a pulmonary and intensive care specialist. He holds iPads up to the dying so they can see their families one last time. “It’s better than nothing,” he said.

Meanwhile, Dr Juvelekian says he is low on medicine, a side-effect of the financial crisis. The Lebanese pound has lost 80 per cent of its value against the official exchange rate and once common pharmaceutical imports have become staggeringly expensive. The central bank is burning through hard currency reserves to subsidise medical supplies, but shortages are widespread.

The blast and coronavirus surge revealed weaknesses in Lebanon’s patchwork of healthcare providers. Many medical staff are getting reduced or delayed salaries. Hospitals struggle to retain doctors; hundreds have emigrated.

Volunteers fill the gaps. More than 80 per cent of Lebanon’s hospitals are private, yet 80 per cent of emergency ambulance services are provided by the volunteer-staffed Lebanese Red Cross, said its secretary-general, Georges Kettaneh.

They are the pandemic’s frontline: in the first 20 days of January 2021 alone, Red Cross ambulances ferried around 3,200 Covid-19 patients, almost as many as during the period from February to August 2020.

Even as Covid-19 patients overwhelmed intensive care units, protesters in Lebanon’s deprived second city, Tripoli, clashed with security forces over the lockdown for the third consecutive night on Wednesday.

State media, which reported that one man had been killed, said that 226 civilians and military personnel were injured as the clashes descended into rioting. Lebanon has been rocked by mass demonstrations since a protest movement gathered momentum in late 2019 but fatalities are rare.

Security forces used tear gas and water cannon, while protesters told local media that officers in riot gear fired live bullets during one altercation. The Lebanese Internal Security Forces have not commented on the use of live fire, but said they were attacked with stones and hand grenades as protesters tried to break into at least one government building.

The economic pain — growth contracted 19 per cent last year — has made it hard to enforce lockdowns and fuels anger about the 24-hour curfew implemented in mid January. About half the population has fallen below the poverty line. The economic pressure meant the caretaker government removed most restrictions when expats armed with hard currency arrived at Christmas. People “went to events and dinners . . . like we are in normal [life]”, said Mr Kettaneh, adding the current virus surge was “their fault”.

Yet on Monday, Beirutis in the streets around Saint George spilled into the January sun, queueing outside bakeries. During the weekend, snow on Lebanon’s famous cedar trees proved irresistible; traffic was reported on roads to mountain resorts.

That news “got my blood curdling”, said Dr Juvelekian, who cannot remember the last time he had a day off. He pleaded with people to stay at home: “I can’t keep doing this . . . we’re exhausted.”