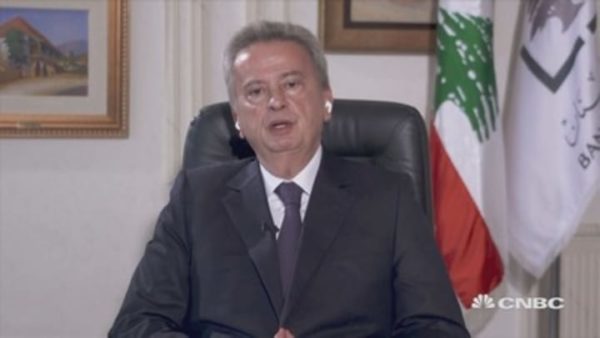 The decision came after Aoun found cracks in a central bank scheme meant to sell dollars to food producers and importers at a subsidised rate to curb inflation, the source said.

“The dollars did not all end up in the right place,” with some reaching money exchangers who then profited by selling them on the black market, the source added.

The Lebanese pound had been pegged to the dollar at 1,500 since 1997 but the country’s worst economic crisis in decades has seen its value plunge by more than  80% on the black market.

The dizzying devaluation has led to soaring food prices in a country where more than half of the population lives below the poverty line.

In May, authorities said the central bank would provide dollars to support the import of basic foods and related raw materials.

Aoun last month questioned Salameh, his aides and several money exchangers to determine whether the subsidised dollars reached their target.

“The sum of money that went into the pockets of money exchangers and financial institutions exceeds five million dollars,” the judicial source said.

Michel Mekattaf, a top foreign currency exporter and Abed al Rahman al-Fayyed, a money exchanger, have also been referred to investigation over the same case.

Salameh is the subject of a separate probe by Swiss authorities into large money transfers he allegedly made out of Lebanon despite tight banking controls.

The veteran central bank chief, who has come under fire over the country’s financial downturn, has denied all allegations brought against him.

“The sum of money that went into the pockets of money exchangers and financial institutions exceeds five million dollars,” the judicial source said.