Trump will step down and Pence to pardon him, New York AG predicts 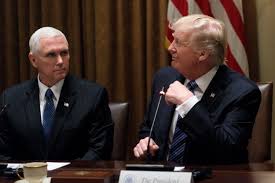 New York Attorney General Letitia James (D) predicted on Tuesday that President Trump would step down from office and then have Vice President Pence preemptively pardon him.

“He can preemptively pardon individuals, and the vast majority of legal scholars have indicated that he cannot pardon himself,” James said during an appearance on ABC’s “The View.” “What he could do is step down and allow the vice president — Vice President Pence — to pardon him.”

“I suspect at some point in time he will step down and allow the vice president to pardon him,” she added later.

.@NewYorkStateAG @TishJames tells @TheView she suspects Pres. Trump “will step down and allow the vice president to pardon him” before the end of his term as she says the “vast majority of legal scholars have indicated that he cannot pardon himself.” https://t.co/f8u2wbJuik pic.twitter.com/xeJwNtA4eH

The hypothetical scenario James predicted was laid out in a 1974 Department of Justice memo that stated former President Nixon “cannot pardon himself.”

She opened an investigation last year into Trump’s businesses and their connections to Deutsche Bank. The investigation was prompted by the testimony of Trump’s former lawyer Michael Cohen, who under oath testified that the president had inflated his assets and financial statements.

James’s investigation is civil in nature, though she said that could change if her office discovers anything that suggested criminal activities in its investigation into Trump.

James predicted Tuesday on “The View” that Trump would issue pardons to his children, son-in-law, members of his administration and close associates before stepping down himself to receive a pardon.

Last year, New York lawmakers passed a bill advocated by James that would allow state charges to be pursued against an individual who has already received a pardon for a federal conviction.

Some have called for Biden to pardon Trump after he takes office, though the president-elect has previously stated that he will not grant such a pardon.