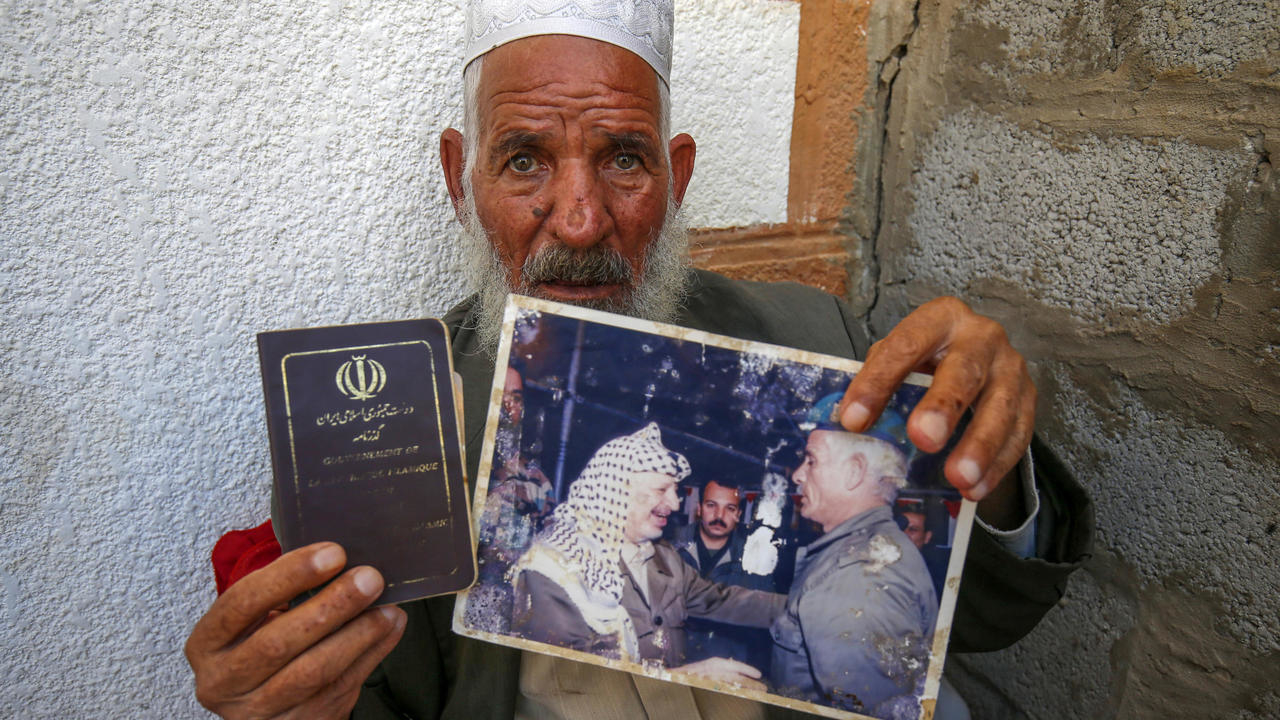 In his house in Khan Yunis, in the southern Gaza Strip, Qassem Sheyasi — known by his Arabic nom-de-guerre Abu Hashem — holds his Iranian passport and a photo of himself with l
Share:

There is only one known Iranian in Gaza — an ageing former bodyguard to longtime Palestinian leader Yasser Arafat who dreams only of returning home, but finds himself stuck in the enclave.

“I just want to get out of here and die in Iran,” Qassem Sheyasi — known by his Arabic nom-de-guerre Abu Hashem — told AFP, making it clear that he is no longer in the Gaza Strip by choice.

Feeble, impoverished and sitting on a mattress laid on the floor, Abu Hashem flicked ash from his cigarette into a tin can with a gentle tap of his index finger as he recounted how he became trapped.

Long before he found himself forced to beg outside Gaza’s mosques on Fridays, Abu Hashem was a young Tehran resident drawn to the Palestinian cause.

He said he left the Iranian capital 40 years ago to join Arafat’s Palestine Liberation Organisation, then based in Beirut, which was one of several armed actors in Lebanon’s civil war.

“In Beirut, I met Abu Ammar (Arafat), who asked me to stay with him,” said Abu Hashem, who sometimes sprinkles his Arabic with Farsi.

“I became a bodyguard for (Arafat) and Abu Jihad,” he recalled, referring to Khalil al-Wazir, the former head of the PLO’s military wing who was killed by Israeli commandos in Tunisia in 1988.

Security sources with Hamas, the Islamist movement which has controlled Gaza since 2007, said Abu Hashem was the only known Iranian currently in the territory.

His age is a subject of some uncertainty. His Palestinian papers put him at 70, his Iranian documents at 78 but, as far he is concerned, he’s been around for nearly 100 years.

His box of yellowed and dog-eared photos tell a somewhat clearer story.

In several, he is wearing military fatigues, straight-backed and looking fit, with Arafat firmly grasping his shoulders with both hands.

Abu Hashem, an explosives expert, was however evasive when asked for details on the nature of his work for Arafat in Beirut.

When Arafat moved the PLO from Beirut to Tunis in 1982, Abu Hashem headed for the then North Yemen, where he trained Palestinian fighters.

Among his papers is an expired Iranian passport that was issued in Yemen as well as forged papers identifying him as a Palestinian refugee.

After Israel and the Palestinians signed the historic Oslo Accords, Arafat set up a new base in Gaza from where he was to launch an era of Palestinian self-governance beginning with control over the territory and the West Bank town of Jericho.

Abu Hashem joined Arafat in Gaza and was promoted within the fledgling Palestinian security forces.

His eldest daughter Mona Sheyasi said she remembered seeing her father alongside Arafat, who died in 2004.

“After Gaza, he never travelled again,” said the 24-year-old, who lives in a shack made of concrete and tin next to a landfill.

Economic opportunities are limited in Gaza which has been under Israeli blockade since 2007, the year Hamas took power in the coastal enclave.

Before the pandemic the poverty rate was above 50 percent and is widely believed to have surged in recent months.

Abu Hashem said he still receives his Palestinian pension of $460 per month, hardly enough to support his wives, children and grandchildren.

“It’s humiliating. I lost everything. My family is suffering from poverty,” he said.

Compounding Abu Hashem’s plight is his connection to Arafat.

Hamas is a longstanding rival of Arafat’s Fatah movement, making it nearly impossible for Abu Hashem to make connections with Gaza’s current rulers, even though the Islamist movement is close to Iran.

Short on money or powerful contacts, Abu Hashem is effectively a prisoner in Gaza.

The enclave is wedged between Israel, Egypt and the Mediterranean Sea.

Exit through Israel, which considers Iran its number one enemy, is a non-starter, while travel through Egypt would require a valid passport, which Abu Hashem no longer has.

“Even Iran’s sewers are better than Gaza,” he said. “I was a fool to stay here.”