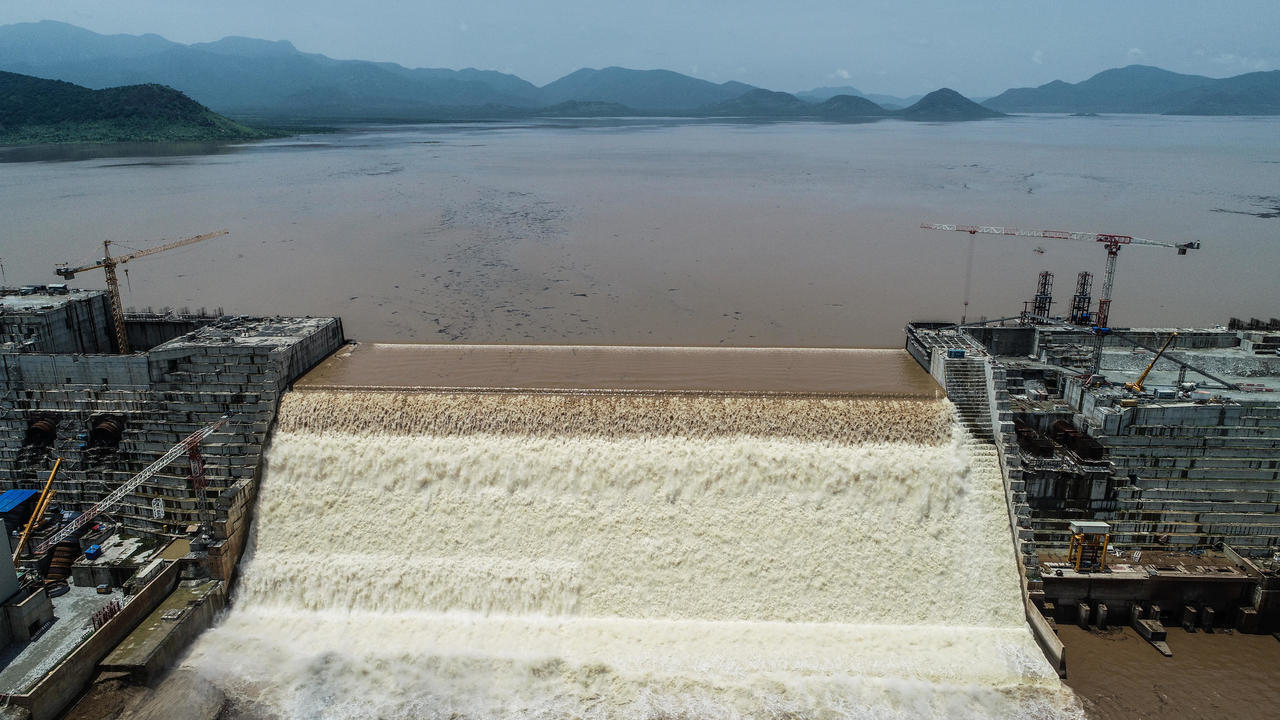 This handout picture taken on July 20, 2020 and released by Adwa Pictures on July 27 shows an aerial view of the Grand Ethiopian Renaissance Dam on the Blue Nile River in Guba, northwest Ethiopia. © AFP
Share:

Ethiopia on Saturday denounced “belligerent threats” over the huge dam it has nearly completed on the Blue Nile River, a day after U.S. President Donald Trump said downstream Egypt will “blow up” the project it has called an existential threat.

Without naming Trump or the U.S., the statement by Prime Minister Abiy Ahmed’s office came amid an outcry in Ethiopia over Trump’s latest threat over the dam. The $4.6 billion Grand Ethiopian Renaissance Dam is a source of national pride, aimed at pulling millions of people from poverty.

“The man doesn’t have a clue on what he is talking about,” Former Prime Minister Hailemariam Dessalegn tweeted, calling Trump’s remark reckless and irresponsible.

Trump made the comment while announcing that Sudan would start to normalize ties with Israel. Downstream Sudan is a party to the talks with Ethiopia and Egypt over the disputed dam. “They (Egypt) will end up blowing up the dam,” Trump said. “And I said it and I say it loud and clear … they’ll blow up that dam. And they have to do something.”

The U.S. president earlier this year told the State Department to suspend millions of dollars in aid to Ethiopia because of the dam dispute, angering Ethiopians who had accused the U.S. of being biased during its earlier efforts to broker a deal on the project among Ethiopia, Egypt and Sudan. Ethiopia walked away from those talks.

“They will never see that money unless they adhere to that agreement,” Trump said Friday.

It added: “Ethiopia will not cave in to aggressions of any kind.”

Ethiopia celebrated the first filling of the dam in August, citing heavy rains, to the dismay of Egypt. Ethiopia later banned flights over the dam amid concerns over possible military action by Egypt.

Now, with Trump’s new remarks, some Ethiopians are urging Ethiopian Americans to help vote him out of office in next month’s election.

The statement by Abiy’s office said the talks with Egypt and Sudan have shown significant progress since the African Union has stepped in to oversee them. Trump’s statement could undermine that process, said Abel Abate Demissie, an associate fellow at Chatham House, adding that it proves the U.S. wasn’t an honest broker from the start.

Ethiopia says the colossal dam could help it become a major power exporter. Egypt depends on the Nile to supply its farmers and a booming population of 100 million with fresh water.

Negotiators have said key questions remain about how much water Ethiopia will release downstream if a multi-year drought occurs and how the countries will resolve any future disputes. Ethiopia rejects binding arbitration at the final stage.

A military strike on the dam would be disastrous, one water expert warned. The dam already has more than 4.9 billion cubic meters of water in its reservoir,” Abebe Yirga told The Associated Press. “It will affect thousands of people along the way if this huge amount of water gushes out of the dam.”

The Blue Nile joins the White Nile in Sudan to become the Nile, and about 85% of the river’s flow originates from Ethiopia. Officials hope the dam, now more than three-quarters complete, will reach full power-generating capacity in 2023.