UAE, Bahrain , Israel peace accord: Without the Palestinians, true peace is unlikely 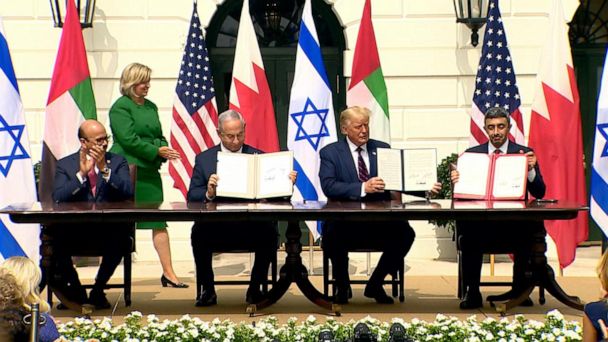 The much-vaunted announcement that Bahrain will normalize relations with Israel, hot on the heels of the United Arab Emirates, has been greeted with excitement in Western foreign policy circles. But true stability in the region is a long way off.

Over the course of the past month, two Arab Gulf states have declared their intentions to normalize relations with the state of Israel, making them the fourth and fifth to do so (after Egypt, Jordan, and temporarily Mauritania) since Israel’s establishment in what was then Mandatory Palestine in 1948. Much of the Western policy and media establishment, both in London and particularly in Washington DC, reacted very excitably to the news. There’s even a suggestion that U.S. President Donald Trump deserves a Nobel Peace Prize for midwifing the move.

Supporters of the deal argue that the Arab states’ declarations have overturned the historically held notion that a stable Arab world, in which Israel is fully accepted, would only occur after finding a solution to the Palestine question. But this new narrative overlooks a crucial set of issues that will not disappear, even if they may seem distant to those watching from thousands of miles away. Within the region, the siege of the Gaza Strip, the expansion of settlements in the West Bank, and the denial of a solution to the refugee issue remain an open wound for the Arab public.

Normalization with the Arab world has evaded Israelis for decades. The establishment of the state of Israel resulted in hundreds of thousands of Palestinians being dispossessed, and Palestinian, Syrian, and Egyptian territories were militarily occupied by Israel in contravention of international law. Within those territories, Israeli, Palestinian, and international human rights organizations have long objected to Israeli forces repeatedly violating human rights conventions. This happens in territories that the overwhelming majority of the international community—and international law—recognize as illegally occupied by Israel. Discrimination against Palestinian citizens of Israel is an additional issue entirely.

Dr. H.A. Hellyer is a senior associate fellow and scholar at the Royal United Services Institute in London and a nonresident scholar at the Carnegie Endowment for International Peace. His research focuses on politics, international relations, security, and religion in the West and the Arab world.

For decades, successive Arab governments in the region have, nevertheless, committed to the normalization of relations with Israel—provided that Israel withdraws from the occupied territories and facilitates a just and legal solution to the Palestinian refugee question. Hence the Arab Peace Initiative, drawn up by Saudi Arabia in 2002, which has the unanimous support of all members of the Arab League. Yet still the longest military occupation in the world continues, and the ensuing refugee problem endures. Indeed, the United Nations Relief and Works Agency for Palestine Refugees has been in continual operation since 1949.

What seems to have excited so many over these latest announcements from the UAE and Bahrain is that the sequence for normalization is being overturned. No longer, it seems, must normalization come after withdrawal from the occupied territories, and the achievement of a just peace with the Palestinians. Normalization can happen first—so goes the narrative—and then, perhaps, Israel will withdraw thereafter. The “perhaps” is important, because there is no guarantee stipulated in any of these agreements that Israel will not annex Palestinian territories. The road to regional stability will go through more normalization efforts such as these, and, so it is suggested, the international community can expect further normalization going forward.

But all of this misses the full meaning of normalization. Normalization is not simply the establishment of official diplomatic relations between states. That is only a part of the normalization of officialdom. If that were the case, then Israel has already somewhat normalized in the past with many Arab states. Morocco, Oman, Qatar, and Tunisia have all previously had commercial offices in Israel. Doha even hosted an Israeli trade office for a time, with resident Israeli diplomatic representation. But no one could realistically claim any of this was full normalization. By and large, none of these forays lasted—and while they did last, no people-to-people normalization took place.

Normalization is not simply a top-level exchange of officials; rather, it’s a public-to-public engagement. Decades after the Egyptian peace accords, people-to-people normalization does not exist, and relations remain quite cold on a cultural level. The same is true for the Jordanian peace accords, signed in 1994. In the aftermath of the declaration of the Bahraini steps toward normalization, there were protests in Manama against the government’s move, alongside public declarations by Bahraini politicians and civil society. Even prior to that, there were denouncements across the Gulf by opponents to normalization, describing it as betrayal.

On the ground in the Arab world, the opposition to normalization vividly continues. When U.S. Secretary of State Mike Pompeo visited Sudan, for example, and tried to tie support for Sudan’s transition from dictatorship to normalizing relations with Israel, Sudan’s transitional leaders firmly rejected the idea. They were aware that in a Sudan where public opinion now genuinely mattered, the newly empowered Sudanese population would punish any such move. It is a lesson that all should take note of: the deepening of democratic norms in the region makes it all the more necessary for Israel to respect international law in engaging with the Palestinians, if normalization really is desired.

OVERCOMING ISRAEL’S NORMALIZATION PARADOX – PALESTINIANS ARE NOT AN OPTIONAL EXTRA

It is true that in 2020, the Palestinian cause is no longer a primary rallying point in most Arab states. The turmoil of the past decade has meant that Arab populations are far more occupied with tumult at home. The Arab revolutionary uprisings of 2011 and their aftermath unleased scores of different complications. But even against that backdrop, it is important to remember that those uprisings often flew the Palestinian flag in protests. That signified the centrality of the symbolism of the Palestinian cause, connecting it to the Arab revolutionary demand for genuine autonomy and empowerment after colonial and postcolonial regimes.

Israel continues to desire full normalization in the region, but paradoxically, it seeks to do so in ways that make true normalization a veritable impossibility. The evidence that we can gather from all moves toward normalization with Israel in the Arab world over the past four decades makes it clear: announcing partial or full diplomatic relations with Arab states does not result in acceptance by Arab populations, unless accompanied by grassroots buy-in, which is inextricably connected to the question of Palestine.

Indeed, even as Israel proclaims diplomatic success in the Gulf, the reaction across Arab public platforms, be it on social media or media outlets, has drawn attention to Israel’s increased sense of impunity in dealing with Palestinians on the ground. In the past month, there has been a major spike in the demolition of Palestinian homes by Israeli forces and Israeli military incursions into Palestinian territory. Israel has made it clear that it does not feel treaty-bound to stop annexing Palestinian territory in the future, let alone withdraw from occupied territories. A true normalization with the Arab public is unlikely to follow such moves—on the contrary.

The most realistic path to full normalization for Israel does not require its government to set up diplomatic outposts in cities far away from Tel Aviv, but rather, to come to an equitable and just settlement with the people of Palestine, from Gaza to Jerusalem to Ramallah. The non-resolution of this historic conflict only perpetuates its festering trauma. As such, true normalization is likely to elude Israel for quite some time to come, regardless of how much excitement ensues now. In the end, the normalization of Israel in the region can only come through an acceptance on the ground by the wider Arab public, including the people of Palestine—irrespective of fanfare from the Trump administration.