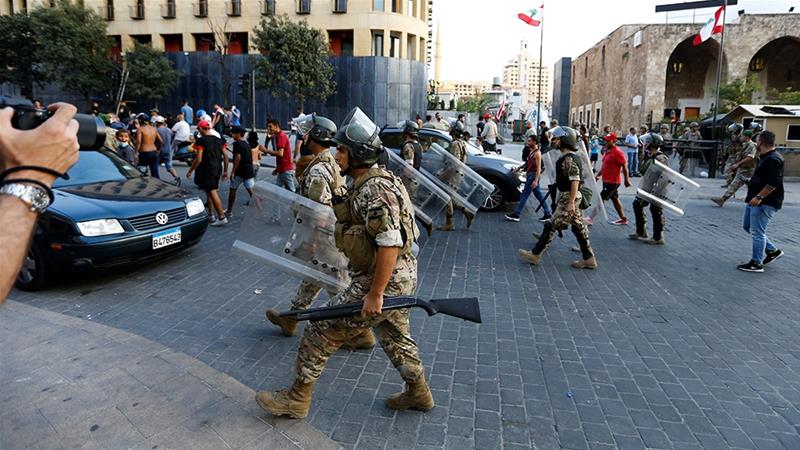 Lebanese army soldiers are deployed during a protest in the aftermath of last week’s deadly blast in Beirut [Thaier al-Sudani/Reuters]
Share:

Beirut, Lebanon – Lebanon’s parliament has approved a state of emergency that grants sweeping powers to the army, citing the exceptional circumstances in the country following a massive explosion in Beirut last week.

The cabinet had declared a two-week state of emergency on August 5, the day after the Beirut blast that left at least 200 dead and some 6,000 injured. Parliament on Thursday voted for the emergency declaration eight days in, as is legally required, though it could have also voted it down.

The state of emergency allows the army to curb free speech, freedom of assembly, and freedom of the press, as well as to enter homes and arrest anyone deemed a security threat.

Judicial proceedings are to take place in the country’s military courts, which Human Rights Watch and other rights groups have shown do not conform to standards on due process.

Rights groups have raised serious concerns about the state of emergency, saying it would enable security forces to crack down on a public raging with anger against the ruling class following the blast.

The huge explosion – one of the biggest non-nuclear blasts in history – was fueled by some 2,750 tonnes of dangerous chemicals left in storage at Beirut’s port for nearly seven years, with the knowledge of top security and political officials.

Citing the “militarization of the state”, parliamentarian Osama Saad was the only one out of the 119-member chamber, a reduced number after the resignation of nine MPs since the explosion, to oppose the state of emergency.

Parliament Speaker Nabih Berri responded the army had “not taken steps that people fear, nor suppress television [channels] and despite the chaos in the media it did not intervene and left room for protest”, according to local media. Sessions are not televised and, therefore, statements by lawmakers are carried by local media.

Some 728 people were injured, many left with serious wounds that required emergency surgery. About 12 journalists were also assaulted, including at least four who were assaulted by soldiers, one of whom was an Al Jazeera reporter.

The state of emergency is set to run until August 21 but it can be renewed.

Karim Nammour, a member of legal NGO Legal Agenda, told Al Jazeera the state of emergency was entirely unnecessary to address the aftermath of the Beirut blast, given that the country had already been in a state of “general mobilization” because of the coronavirus pandemic.

“This general mobilization already allows cabinet the powers to mobilize the armed forces and to control stores and matters of a strategic nature, including controlling the prices of things like glass and wood, as well as to raise the rubble and provide relief to people,” said Nammour.

“The only real reason we can see for a state emergency is to grant security forces powers to control the streets as much as possible – to give legal coverage to things that would otherwise be impossible,” he said.

“The ruling regime knows that it is weak and unpopular on the streets, and they are afraid because the fingers are pointed at them, and there are calls for revenge.