Hale in Lebanon to stress need for ‘urgent’ reform 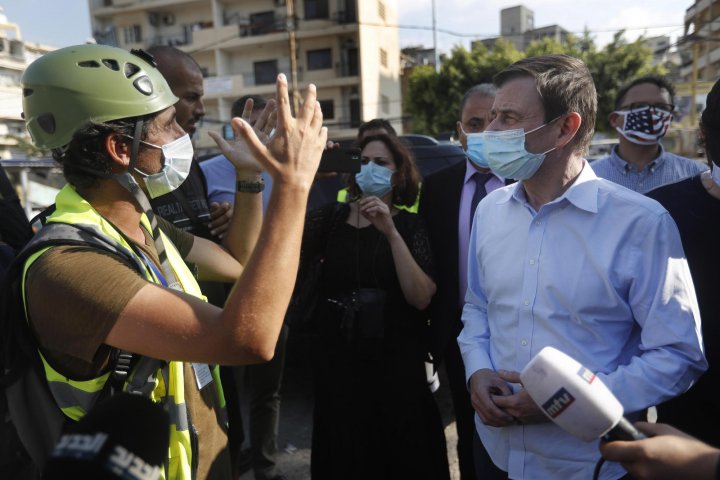 US Undersecretary of State for Political Affairs David Hale (R) listens to a volunteer from an NGO during his visit near the scene of the last week’s explosion that hit the seaport of Beirut, in the Lebanese capital on August 13, 2020. (Photo by Hussein Malla / POOL / AFP)
Share:

WASHINGTON (Reuters) – The No. 3 U.S. diplomat arrived in Lebanon on Thursday to stress the “urgent need” for the country to embrace fundamental reform, the State Department said, in the aftermath of a blast that caused large-scale damage in the capital Beirut.

The Aug. 4 explosion at a warehouse storing highly explosive material killed at least 172 people, injured some 6,000, left around 300,000 without habitable housing and wrecked swathes of the Mediterranean city, compounding a deep economic and financial crisis.

In planned meetings with political leaders, civil society, and youth groups, Undersecretary for Political Affairs David Hale will also underscore America’s willingness to support any government that is “genuinely committed” to and acting upon such a reform agenda, the State Department said in a statement.

He will also reiterate U.S. government’s commitment to assist the country.

Humanitarian aid has poured in but foreign countries have made clear they will not provide funds to help pull Lebanon from economic collapse without action on long-demanded reforms to tackle systemic graft, waste, mismanagement and negligence.

The resignation of Prime Minister Hassan Diab’s government this week has deepened uncertainty. His cabinet’s talks with the International Monetary Fund for a bailout had already stalled over internal differences about the scale of financial losses.

Forming a new government could be daunting amid factional rifts and growing public discontent with a ruling class that many Lebanese brand as responsible for the country’s woes.