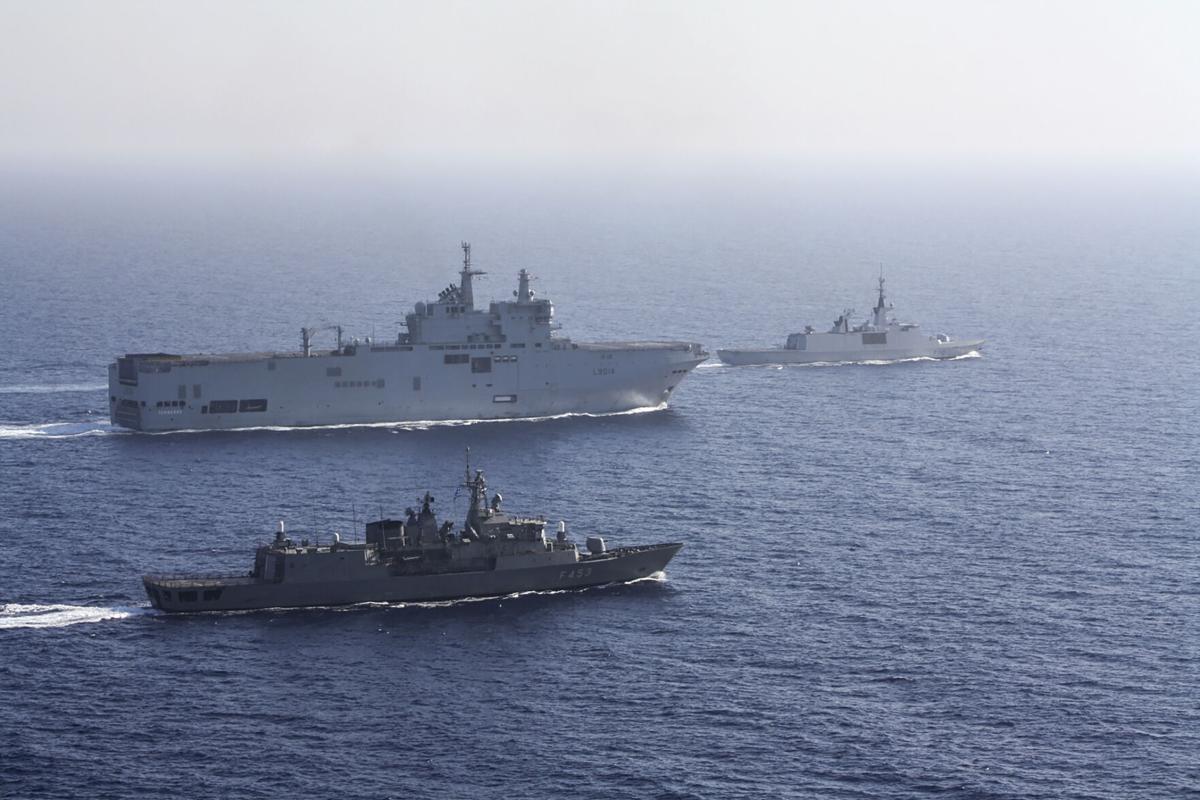 A French Tonnerre helicopter carrier, rear left, is escorted by Greek and French military vessels during a maritime exercise in the Eastern Mediterranean, Thursday. [AP]
Share:

ATHENS, Greece (AP) — Greece’s prime minister warmly thanked France Thursday for boosting its military presence in the eastern Mediterranean, where Greek and Turkish warships are closely shadowing each other over a Turkish energy exploration bid in waters Athens claims as its own.

Meanwhile, Turkey accused Greece and the island nation of Cyprus of encroaching on its rights in the Mediterranean and vowed to defend its interests in the region but also called for dialogue to resolve the dispute.

The mounting territorial tension follows Turkey’s move to send a seismic research vessel, escorted by warships, into waters between the Greek island of Crete and Cyprus to prospect for potential offshore gas and oil reserves, following similar discoveries in other parts of the region.

Greece claims part of the area is over its own continental shelf and has demanded that the Turkish ships withdraw. Turkey counters that it’s entitled to conduct research in the area. Greece placed its military on alert, and sent warships to the area off Turkey’s southern coast.

“The path for a solution in the eastern Mediterranean is dialogue and negotiation,” Erdogan said during an address to his ruling party’s officials. “A formula based on a win-win solution that protects the rights of all can be found if we act with common sense and reason.”

“Greece’s attitude in the Aegean and the Mediterranean is malicious,” Erdogan said, adding that the Greek island on which Athens bases its continental shelf claim is located just 2 kilometers (1.25 miles) from the Turkish coast and 580 kilometers (369 kilometers) from the Greek mainland.

Erdogan said: “We don’t have designs on anyone’s rights, but we won’t let any country take away our rights.”

The Greek Defense Ministry said the French frigate Lafayette and the helicopter carrier Tonnerre held joint exercises with four Greek frigates Thursday in the eastern Mediterranean, including in areas Turkey is exploring. Two French Rafale fighter jets are making a stop Thursday at Souda, on Crete, after being previously deployed in Cyprus for an exercise.

The French Defense Ministry said France’s military presence “is aiming at reinforcing France’s autonomous assessment of the situation and affirms the country’s attachment to free movement, maritime safety and respect for international law in the Mediterranean Sea.”

Macron announced following a phone call with Mitsotakis late Wednesday that he decided to “temporarily reinforce the French military presence in the eastern Mediterranean in the coming days, in cooperation with European partners including Greece.”

In a televised statement Wednesday, Mitsotakis warned of the “risk of an accident” in the area where the Greek and Turkish warships are gathered.

“In such a case, responsibility lies upon the one who gives rise to these circumstances,” he said. He added that Greece was not averse to “even the toughest dialogue,” but that “dialogue becomes irrelevant in a climate of tension and provocation.”

“We will never be the ones to escalate the situation. Yet, self-restraint is only one aspect of our power,” Mitsotakis said. “No provocation will … go unanswered.”

On Thursday, Greek Foreign Minister Nikos Dendias traveled to Israel for talks on the matter. Dendias is due to meet U.S. Secretary of State Mike Pompeo in Vienna on Friday.

Turkish Foreign Minister Mevlut Cavusoglu held calls with EU foreign policy chief Josep Borrell as well as the foreign ministers of Bulgaria, Estonia, Finland, Italy, Hungary and Lithuania ahead of an emergency meeting of the EU’s Foreign Affairs Council to discuss the situation in the eastern Mediterranean.

Cyprus Foreign Minister Nikos Christoulides tweeted Thursday that his Israeli counterpart and “true friend” Gabi Ashkenazi communicated with him to “reiterate Israel’s support and solidarity in the face of escalating aggression in Cyprus’ maritime zones.”

Turkish President Recep Tayyip Erdogan on Thursday also hit out at his French counterpart Emmanuel Macron for visiting Lebanon in the wake of its devastating blast in Beirut earlier this month, accusing him of “putting on a show.”

“Macron’s concern is to bring back a colonialist structure. We don’t have desires like that,” he said, without directly criticizing France’s plans in the region.

But the Turkish president dispatched to Lebanon his Vice President and his Foreign Minister a day after Macron visited Lebanon . While Macron focused on the people of Lebanon and their demands , the Turkish delegation focused on meeting top government officials .

Lebanon was occupied in 1918 by the Allied forces and placed under a French military administration. In 1920 Beirut and other coastal towns, Al-Biqāʿ, and certain other districts were added to the autonomous territory Mount Lebanon as defined in 1861 to form Greater Lebanon (Grand Liban; subsequently called the Lebanese Republic). In 1923 the League of Nations formally gave the mandate for Lebanon and Syria to France. In 1943 Lebanon declared its independence from France.

Under the French occupation, public utilities and communications were improved, and education was expanded . Beirut also prospered as a centre of trade with surrounding countries.