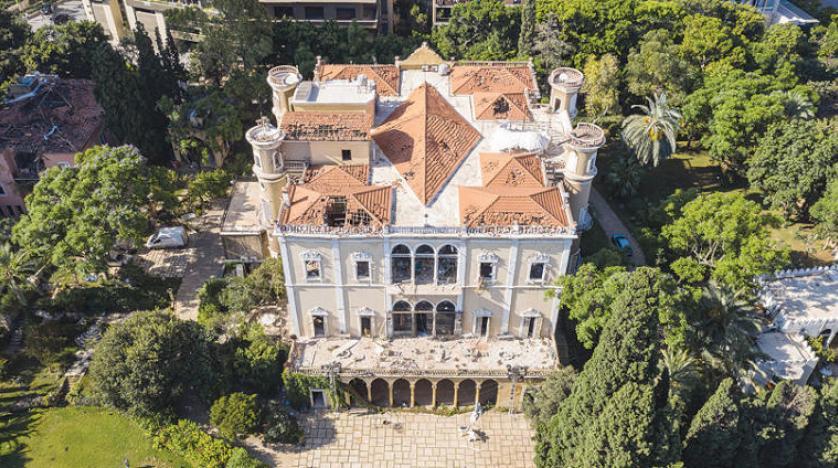 Beirut blast destroys Sursock Palace. The palace which was completed in 1860 , is a symbol of the Sursock family’s rich history. It is located on the historic Sursock Street in the Achrafieh district of Beirut which was devastated by the blast . The Sursock House is surrounded by gardens that have been used for special events, such as weddings .Getty
Share:

An estimated 8,000 buildings have been damaged by the horrific blast that shook Beirut last week, including hundreds of the city’s Levantine villas.

The numbers are rough estimates, as the Ministry of Culture continues to update the international bodies concerned with cultural heritage.

UNESCO held an online meeting with the Permanent Mission of Lebanon to the UNESCO, the General Directorate of Antiquities and organizations concerned with cultural heritage, to coordinate efforts aimed at protecting cultural sites and Beirut’s landmarks that have been damaged or destroyed by the blast, and determine how the international community can best support Lebanon.

They pointed out that UNESCO and its partners moved immediately for this purpose.

The UNESCO office in Beirut stressed that this meeting is the first in a series of meetings.

The Director-General of Antiquities, Sarkis El-Khoury, gave a presentation to survey the damage. It showed that most of the damaged buildings date back to the Ottoman era and the French mandate, and are modern architectural heritage sites, especially in the districts of Gemmayze, Mar Mikhael and Ashrafieh, as well as in Zuqaq Al-Blat and Mina Al-Hosn.

Up to 600 buildings may have been affected and the estimated cost of repairing and restoring them will not come out to less than 300 million dollars.

The Permanent Representative of Lebanon to UNESCO, Ambassador Sahar Baassiri, thanked the agency for its quick response.

She went on to say that “saving the heritage in Beirut that is under threat today is not an initiative for Lebanon only, but rather an (initiative that will) save part of humanity’s heritage for us and future generations.”

All participants expressed their commitment to support Lebanon and help it protect its damaged heritage gems, and stressed the “importance of achieving the mission in steps, starting with the most urgent, especially buildings with destroyed roofs or foundations, which need to be fixed before winter starts.”