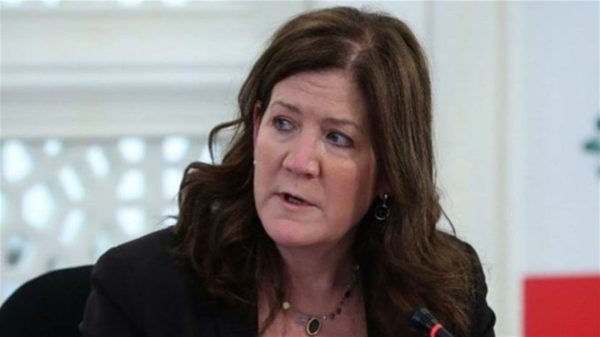 A senior diplomatic source told “Future Movement Website ” that the Lebanese government was warned by the US ambassador to Lebanon Dorothy Shea that the “Caesar Law” includes a ban on importing electricity from Syria to Lebanon.

It is known that an agreement signed between Lebanon and Syria to import electricity has been awaiting renewal for three months.

So does the Ministry of Energy intend to sign a new agreement or adhere to the “Caesar Law”? Shea asked .

The United States has imposed a sweeping set of new sanctions against any country, individual or entity that provides support to the Syrian government – a campaign that experts warn may devastate the lives of ordinary Syrians trying to survive and rebuild after nine years of war.

It targets the supporters of the Assad government in politics, business and banking. From Russia to Europe, the Gulf, Lebanon and beyond, the new sanctions may freeze assets and trigger travel bans and arrest warrants against violators.

The act, which is named after a Syrian military photographer who smuggled tens of thousands of gruesome photos out of the country that documented evidence of war crimes, was passed in December as part of the Trump administration’s  defence policy bill.

“Our sanctions under the Caesar Act and Executive Order 13894 are not intended to harm the Syrian people, but rather to promote accountability for the Assad regime’s violence and destruction that has killed hundreds of thousands of civilians,” the US State Department said in a statement on last June.

“This act is meant to send a clear signal that no foreign business should enter into business with or otherwise enrich such a regime,” it added.