Lebanese retailers to shut down amid volatile currency, blame gov, urged it to quit 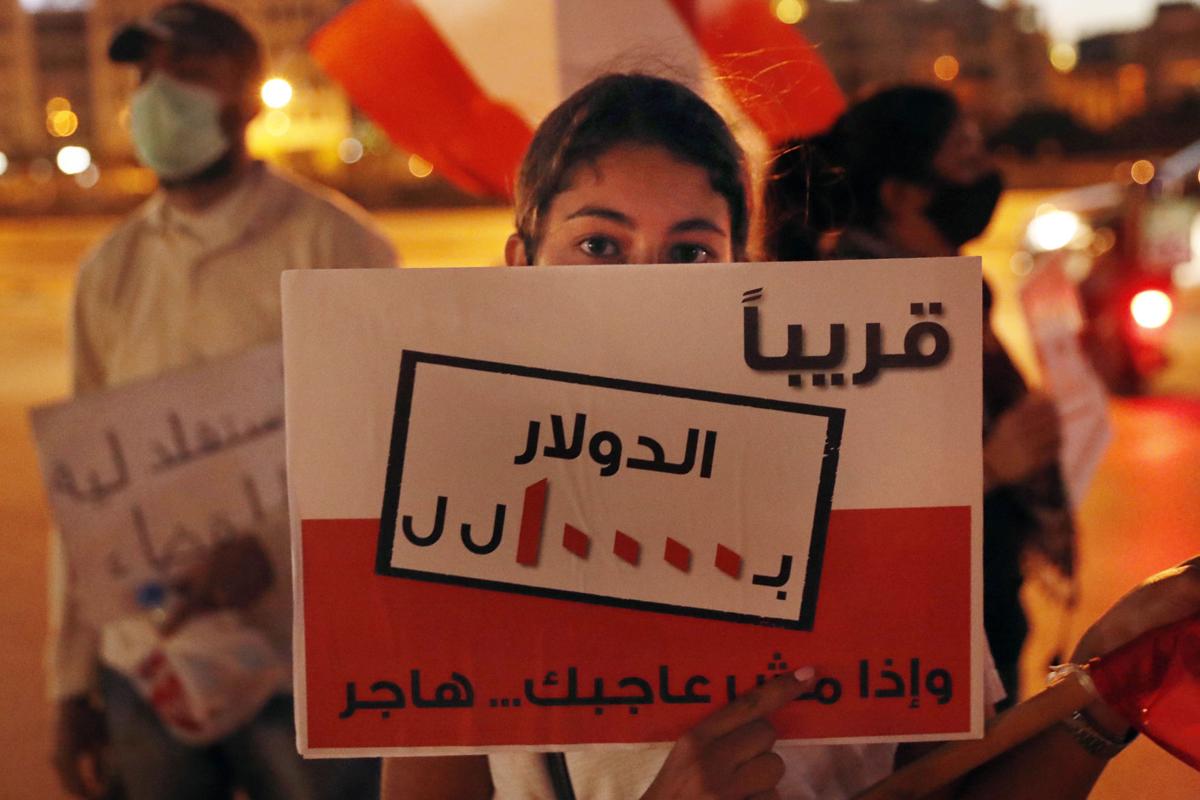 An anti-government protester holds a placard in Arabic that reads “Soon $ 1 = 10000 Lebanese pounds, if you are not happy, leave ,” during a protest against the political leadership they blame for the economic and financial crisis, in front of the government house in downtown Beirut, Lebanon, Thursday, June 11, 2020.Hussein Malla
Share:

BEIRUT (AP) — Major retailers in Lebanon announced on Thursday they will temporarily shut down in the face of an increasingly volatile currency market and their inability to set prices while the Lebanese pound plunges against the dollar.

Later in the day, owners of the businesses rallied in central Beirut to denounce the government’s inability to handle a deepening economic and financial crisis, and urging others to join them.

“The company is losing and … (the customers) think we are robbing them,” Samir Saliba, owner of sportswear retailer Nike Sport, told The Associated Press. “We want a clear economic policy to know how to move forward and not buy our dollars from the black market and be humiliated with the brokers and money changers.”

The protesters called on the government to resign and urged other stores to join their protest shutdown.

The Lebanese pound recorded a new low Thursday, selling at nearly 10,000 for a dollar and maintaining the downward slide that saw the national currency lose about 85% of its value over the past months. Despite government and central bank efforts to regulate the foreign currency rate, a parallel market has thrived and inflation is soaring as the dollar becomes increasingly scarce.

Amid the tumbling pound, prices and inflation have soared. Power cuts have also increased, as the government struggles to secure fuel and diesel, while grocery stores began imposing a limit on how many items customers can buy amid a rush to hoard basic goods.

The small country of 5 million people and more than 1 million Syrian refugees is experiencing an unparalleled economic meltdown, rooted in years of mismanagement and excessive public spending. In recent weeks, the highly indebted Lebanon defaulted for the first time on its sovereign debt and began talks with the International Monetary Fund for assistance while a liquidity crunch deepened.

Now, nearly two months into the negotiations, the talks have been deadlocked, mostly because of disputes between Lebanese political rivals over a rescue plan and calculating liabilities. Two officials in the Lebanese delegation resigned in the past few days in protest of the internal discord.

On Thursday, embattled Prime Minister Hassan Diab accused “local and external parties” of seeking to besiege Lebanon and make his government fail. He also accused internal forces he did not name of causing the currency crisis.

“The dollar game has become exposed and visible,” he told a Cabinet meeting. Diab also claimed foreign countries were “blatantly interfering in Lebanon’s affairs,” aided by internal powers to “drag Lebanon into the region’s conflicts.” He did not elaborate.

Diab, in office since January, has the backing of the powerful militant Hezbollah group and its allies. But his government has failed to gain support from rival political groups and many among the protest movement, which fizzled after Lebanon imposed restrictions over the coronavirus outbreak. As the currency went into a dizzying downward spin, angry protesters returned to the streets — although in smaller number — some smashing bank offices and blocking roads.

Major retailers posted what appeared to be coordinated messages on their social media, saying they will close because they can’t keep up with the fluctuation in the currency market. They used the hashtag #WeAreHereToStay.

Lebanon imports most of its basic needs as well as expensive luxury goods, racking up a huge trade deficit. Amid the liquidity crunch, the imports bill dropped by over 40% in the first four months of 2020, compared to the same period last year.